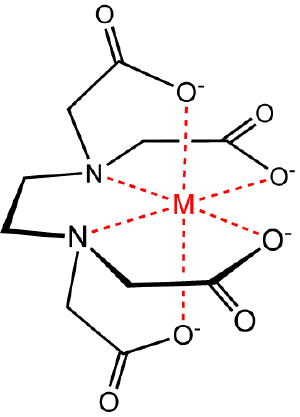 Chelation is the binding or complexation of a bidentate or multidentate ligand to a substrate. The ligand, which is often an organic compound, is called a chelant, chelator, chelating agent, or sequestering agent. The substrate is usually a metal ion. The complex formed between the ligand and the substrate is called a chelate complex. The term chelation is reserved for complexes in which the metal ion is bound to two or more atoms of the chelating agent. Common chelators include citric acid, EDTA, and phosphonates.

In nature, various proteins, polysaccharides, and nucleic acids are good chelators of many metal ions. In addition, metal chelates are important for the mobilization of metals in the soil, and the uptake of metals by plants and microorganisms.

Chelation is useful for various practical applications. For example, chelators are used in chemical analysis, as water softeners, as ingredients in shampoos and food preservatives, and in water treatment programs. In medicine, chelating agents may be used to detoxify a person from poisonous metals by converting the metals to chemically inert forms. Some advocate the use of chelation as a treatment for autism. Tetracycline antibiotics are chelators of Ca2+ and Mg2+ ions. EDTA is used in root canal treatment, and gadolinium(III) chelates are used as contrast agents in MRI scans. Although chelating agents can be beneficial, some can be dangerous under certain circumstances.

Chelation is from Greek χηλή, chelè, meaning "claw". The term chelate was first applied in 1920 by Sir Gilbert T. Morgan and H. D. K. Drew, who stated: "The adjective chelate, derived from the great claw or chele (Greek) of the lobster or other crustaceans, is suggested for the caliperlike groups which function as two associating units and fasten to the central atom so as to produce heterocyclic rings."[1]

Consider the two equilibria, in aqueous solution, between the copper(II) ion, Cu2+ and ethylenediamine (en) on the one hand and methylamine, MeNH2 on the other.

An equilibrium constant, K, is related to the standard Gibbs free energy, ΔG

where R is the gas constant and T is the temperature in Kelvin. ΔH

is the standard enthalpy change of the reaction and ΔSImage:StrikeO.png is the standard entropy change. It has already been posited that the enthalpy term should be approximately the same for the two reactions. Therefore the difference between the two stability constants is due to the entropy term. In equation (1) there are two particles on the left and one on the right, whereas in equation (2) there are three particles on the left and one on the right. This means that less entropy of disorder is lost when the chelate complex is formed than when the complex with monodentate ligands is formed. This is one of the factors contributing to the entropy difference. Other factors include solvation changes and ring formation. Some experimental data to illustrate the effect are shown in the following table.[2]

These data show that the standard enthalpy changes are indeed approximately equal for the two reactions and that the main reason why the chelate complex is so much more stable is that the standard entropy term is much less unfavourable, indeed, it is favorable in this instance. In general it is difficult to account precisely for thermodynamic values in terms of changes in solution at the molecular level, but it is clear that the chelate effect is predominantly an effect of entropy.

Other explanations, including that of Schwarzenbach,[3] are discussed in Greenwood and Earnshaw, 910 (loc.cit).

Many biochemicals exhibit the ability to dissolve certain metal cations. For example, proteins, polysaccharides, and nucleic acids are excellent polydentate ligands for many metal ions. Histidine, malate, and phytochelatin are typical chelators used by plants.[4][5][6]

In biochemistry and microbiology

Virtually all metalloenzymes feature metals that are chelated, usually to peptides or cofactors and prosthetic groups.[7] Such chelating agents include the porphyrin rings in hemoglobin and chlorophyll. Many microbial species produce water-soluble pigments that serve as chelating agents, termed siderophores. For example, species of Pseudomonas are known to secrete pycocyanin and pyoverdin that bind iron. Enterobactin, produced by E. coli, is the strongest chelating agent known.

In Earth science, chemical weathering is attributed to organic chelating agents, such as peptides and sugars, that extract metal ions from minerals and rocks.[8] Most metal complexes in the environment and in nature are bound in some form of chelate ring, such as with "humic acid" or a protein. Thus, metal chelates are relevant to the mobilization of metals in the soil, and the uptake and the accumulation of metals into plants and micro-organisms. Selective chelation of heavy metals is relevant to bioremediation, such as the removal of 137Cs from radioactive waste.[9]

Chelators are used in chemical analysis, as water softeners, and are ingredients in many commercial products such as shampoos and food preservatives. Citric acid is used to soften water in soaps and laundry detergents. A common synthetic chelator is EDTA. Phosphonates are also well known chelating agents. Chelators are used in water treatment programs and specifically in steam engineering, such as the boiler water treatment system, or the Chelant Water Treatment system.

Chelation therapy is the use of chelating agents to detoxify poisonous metal agents such as mercury, arsenic, and lead by converting them to a chemically inert form that can be excreted without further interaction with the human body. This type of therapy was approved by the U.S. Federal Drug Administration FDA in 1991. Chelation is also used but unproven as a treatment for autism.[10]

Although chelating agents can be beneficial, they can also be dangerous under certain circumstances. For instance, the U.S. CDC reports that use of Na2EDTA instead of CaEDTA has resulted in fatalities due to hypocalcemia.[11]

Antibiotic drugs of the tetracycline family are chelators of Ca2+ and Mg2+ ions.

EDTA is also used in root canal treatment as a way to irrigate the canal. EDTA softens the dentin, facilitating access to the entire canal length and to remove the smear layer formed during instrumentation.

Gadolinium(III) compounds and chelates are often used as contrast agents in MRI scans.

Retrieved from https://www.newworldencyclopedia.org/p/index.php?title=Chelation&oldid=890382
Categories:
Hidden category:
This page was last edited on 27 December 2008, at 19:27.
Content is available under Creative Commons Attribution/Share-Alike License; additional terms may apply. See Terms of Use for details.