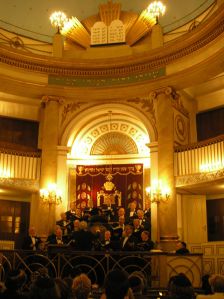 Cantor-concert in the Vienna Stadttempel synagogue

In Jewish tradition, a cantor or hazzan is a musician trained in the vocal arts who helps lead the synagogue in songful prayer. While religious singing in Jewish history is very ancient, the formal role of cantor did not emerge until around the seventh century C.E., in Babylonia. A rich tradition of cantorial music flourished in later centuries, reaching its zenith between World War I and World War II in Europe.

In Christianity, a cantor or chanter (Gk. ψάλτης) is the chief singer employed in a church with responsibilities for the ecclesiastical choir; also called the precentor. The Muslim muezzin is a type of cantor in Islamic tradition, who calls the congregation to daily and sabbath prayers.

The cantor's role does not appear in the historical records until the Geonic period of the Middle Ages in Babylonia. However, the Hebrew Bible indicates that the tradition of liturgical singing was very ancient. The earliest incident of a singer leading the Israelites in song dates back to Miriam in Exodus 15:19-21:

Then Miriam the prophetess, Aaron's sister, took a tambourine in her hand, and all the women followed her, with tambourines and dancing. Miriam sang to them:

"Sing to the Lord, for he is highly exalted.
The horse and its rider he has hurled into the sea."

The most famous Hebrew singer of psalms was King David, although his role as a psalmist is considered legendary rather than historical by critical scholars. 1 Chronicles 15:15-17 records that David appointed official religious singers from among the Levites when he brought the Ark of the Covenant to Jerusalem, making it the nation's main religious center as well as political capital. 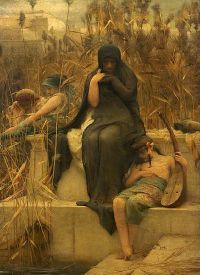 Jewish exiles in Babylon mourn the loss of congregational singing in the Temple of Jerusalem.

Once the Temple of Jerusalem was established, liturgical singers were employed there as well. King Jehoshaphat of Judah appointed men to chant psalms of praise at the head of his army (2 Chronicles 20:21). Psalm 137:4 laments the loss of the tradition of psalm-singing in the Temple during the period of Babylonian exile: "How can we sing the songs of the Lord while in a foreign land?" The second chapter of the Book of Ezra records several hundred singers, including both males and females, returning from exile (see also Nehemiah 7:67). Ezra 7:7 lists singers immediately after Levites in order of importance in the Temple service.

After the tragic destruction of the Second Temple in 70 C.E., a consensus developed that all music and singing would be banned. However, the ban soon became understood as applying only outside of religious services. Within the synagogue, the custom of singing soon re-emerged.

The office of the hazzan or cantor gradually increased in importance with the centuries. By the early Geonic period in the seventh century in Babylonia, knowledge of spoken Hebrew had declined. Thus, the singing of songs in Hebrew, led by a cantor, gradually superseded the spoken Hebrew in the worship in the synagogue. Cantors also recited traditional prayers, which were chanted more than sung. In moments of inspiration a cantor would sometimes give utterance to a phrase of unusual beauty, which would occasionally find its way into the congregational tradition and be passed on to succeeding generations. In Europe, the cantorial tradition was influenced by Christian musical traditions, just as Arabic melodies and Islamiic poetic chants had impacted on Jewish cantors of Babylon and Muslim Spanish. In the modern era, Reform Judaism developed a tradition of cantors involving elaborate accompaniment by pianos, organs, and even orchestras.

Today, most of the Jewish liturgy is sung or chanted with traditional melody or trope (cantillation). Depending upon their size, many synagogues employ either a professional or lay cantor for the purpose of leading the congregation in prayer, or the rabbi may take on this role himself.

In Orthodox congregations, where congregants are more fluent in their ability to read the Hebrew text, understand the words, and perform the basic melodies, the position of hazzan has become less important in some traditions. On the other hand, the presence of a talented cantor can a major factor in attracting additional members of a congregation.

The chief qualifications demanded of the hazzan, in addition to knowledge of biblical and liturgical literature, are a pleasant voice and an artistic delivery. Historically, it was preferred that the hazzan possess a pleasing appearance, to be married, and to have a flowing beard. According to Isaac of Vienna (thirteenth century), a young hazzan having only a slight growth of beard was only sometimes tolerated. Maimonides decided that the hazzan who recited the prayers on an ordinary Sabbath and on week-days need not possess an appearance pleasing to everyone. He might even have a reputation not wholly spotless, provided that at the time of his appointment he was living a life morally free from reproach.

At the time of the holidays, however, some congregations required an especially worthy hazzan, one whose life was absolutely irreproachable, who was generally popular, and who was endowed with an expressive delivery. The important Jewish legal text Shulkhan Arukh, (Orah Hayyim, 581) stated that even a person who had once litigated in a non-Jewish court, instead of a Jewish court, could not act as hazzan on those days, unless he had previously done penance. However other authorities were lenient in this regard, and as long as a cantor was otherwise qualified and desired by the congregation, he was permitted to lead the prayers even on the holiest of days.

Today, a hazzan, particularly in large, non-Orthodox synagogues, is likely to have academic credentials, such as a degree in music or in religious education. Although traditionally cantors are men, women equally serve this role in the more liberal branches of Judaism. As of 2007, Hebrew Union College had certified 184 women cantors.

Cantors as a profession

Cantors became full-time professional clergymen as Jews in a number of European communities, notably in Germany and Britain, came to view the hazzan as the deputy rabbi. This development is also related to the emancipation of Jews after the Enlightenment, when European nations gave full citizenship and civil rights to Jews, and both rabbis and professionally trained hazzanim were accepted by the secular authorities as recognized clergy. In the United States, cantors were actually recognized as clergy even before rabbis.

In the U.S., there are three major organizations for professionally trained hazzanim, one from each of the major Jewish denominations.

Many members of the Cantors Assembly are trained at the Jewish Theological Seminary's H.L. Miller Cantorial School and College of Jewish Music. Members of the American Conference of Cantors are often trained at the School of Sacred Music at Hebrew Union College. Both of these programs offer a five year training program.

The curriculum for students in these programs generally include, but are not limited to:

Many smaller congregations will use non-professional or semi-professional cantors with fewer academic qualifications, and some Orthodox traditions do not train their cantors in a formal academic discipline.

The golden age of hazzanut 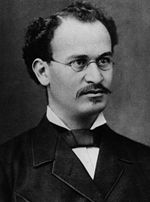 The Islamic version of a cantor is known as a muezzin, and his role is to lead the call to Friday service and the five daily prayers. The professional muezzin is chosen to serve at the mosque for his good character, voice and skills. However, he is not considered a cleric, but rather comparable to a Christian sexton.

The institution of the muezzin has existed since the time of Muhammad and is thought to have influenced the character of early Jewish cantorial melodies, along with the poetic recitation of Islamic verses from the Qur'an. The first muezzin was Bilal ibn Ribah, who walked the streets to call the believers to come to prayer.

In the Eastern Orthodox, Oriental Orthodox and Eastern Catholic Churches, the position of chanter or cantor is one of the minor clerical orders, though it is not unusual for an unordained singer to fill the role of chanter for an indefinite period. The chief chanter is called protopsaltis (Gk. προτοψάλτης). The cantors sing the many hymns called for during the Divine Services. A cantor must be knowledgeable about the ecclesiastical musical modes as well as the complex structure of the services. He must be an Orthodox Christian who has the blessing of the pastor to serve.

In the Roman Catholic Church a cantor is the lead singer of the choir, a bona fide clerical role. The chief singer of the Gregorian Schola Cantorum was called prior scholae or primicerius. In medieval cathedrals, the cantor was principal of music and chant, and also commonly one of the dignitaries of the chapter. During the fourteenth century in many churches, the cantor began to delegate his instruction of the singers to a master of music. After the introduction of harmonized music, some duties naturally fell to the conductor or choir-master.

The cantor's location in the church is most generally to the right of the choir, and directly to his left is his assistant, formerly called the "succentor." A common custom for cantors was the bearing of the staff, which was the mark of his dignity and a visual representative of his sacred role inside the church. This custom still survives in some places. In Protestant churches which use chants, the role of the cantor can be lay or pastoral.