The Burning of Washington is the name given to the burning of Washington, D.C., by British forces in 1814, during the War of 1812. Strict discipline and the British commander's orders to burn only public buildings are credited with preserving most residences, but as a result the facilities of the U.S. government, including the White House, were largely destroyed. The attack was in retaliation for the U.S. invasion of York, Upper Canada (now Toronto, Ontario, Canada), at the Battle of York in 1813, in which U.S. forces looted and burned the city, including the Parliament Buildings of Upper Canada.

The White House was burned. Only the exterior walls remained, and they had to be torn down and mostly reconstructed due to weakening from the fire and subsequent exposure to the elements, except for portions of the south wall. A legend emerged that during the rebuilding of the structure, white paint was applied to mask the burn damage it had suffered, giving the building its namesake hue. This is unfounded, as the building had been painted white since its construction in 1798.

Of the numerous spoils taken from the White House when it was ransacked by British troops, only two have been recovered—a painting of George Washington, rescued by then-first lady Dolley Madison, and a jewelry box returned to President Franklin Delano Roosevelt, in 1939, by a Canadian man who said his grandfather had taken it from Washington. Most of the spoils were lost when a convoy of British ships led by HMS Fantome sank en route to Halifax off Prospect during a storm on the night of November 24, 1814.

The Burning of Washington took place due to the ongoing war between Britain and France. Both countries targeted, neutral at the time, American trade ships. With this ongoing barrage of needless attacks on American trading, the Americans needed little else to coax them to war. Americans fought back against both invading countries. After the U.S. took its part in the Battle of York in 1813, in which American forces carried out several acts of arson and looting in the town before withdrawing, the British deemed it necessary to retaliate. Even though the city of Washington, D.C. did not have any strategic advantage or benefit for the British military, Admiral Sir Alexander Cochrane saw it fit to avenge York and Upper Canada.

On August 24, 1814, the advance guard of the British military marched to Capitol Hill; they were too few in number to occupy the city, so Major General Robert Ross intended to destroy as much of it as possible. When the British commanders rode out to Capitol Hill, they were attacked by snipers from a house at the corner of Maryland Avenue, Constitution Avenue, and Second Street NE. This was to be the only resistance the commanders met due to the almost total abandonment of the city. The snipers managed to kill the horse ridden by Major General Ross. One soldier was killed while just one other was wounded. Having satisfactorily infuriated the British troops, the house was burned to the ground. The snipers had managed to flee. With the city deserted, the furious British raised the Union Jack and flew it over Capitol Hill.

Not long after, the buildings housing the Senate and House of Representatives—construction on the trademark central rotunda of the Capitol had not yet begun—were set ablaze. The interiors of both buildings, including the Library of Congress, were destroyed, although the thick walls and a fortunate torrential rainfall preserved their exteriors. Thomas Jefferson later sold his library to the government to restock the Library of Congress, and British Prime Minister Tony Blair jokingly apologized for the burning of the Library of Congress 189 years later on July 17, 2003.[1] 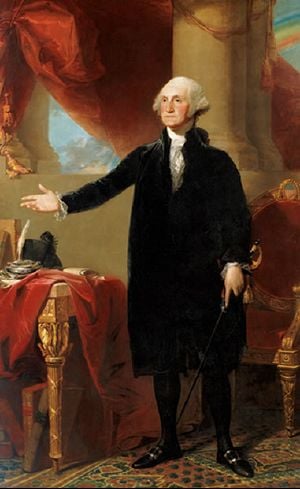 The British also marched south to burn the historic Washington Navy Yard, founded by Thomas Jefferson and the first federal installation in the United States, only to have been beat to the prize. Hoping to prevent the capture of stores and ammunition, as well as the 44-gun frigate Columbia, which was then being built, the Americans preemptively set fire to this landmark. Most fortunately, the United States Patent Office building was saved by the efforts of William Thornton—architect of the Capitol and then superintendent of patents. Thornton was able to convince the British of the utter importance of its preservation.

The next day, Admiral Cockburn entered the building of the D.C newspaper, National Intelligencer, intending to burn it down. However, a group of neighborhood women persuaded him not to because they were afraid the fire would spread to their neighboring houses. Cockburn wanted to destroy the newspaper because they had written so many negative items about him, branding him as "The Ruffian." Instead he ordered his troops to tear the building down brick by brick making sure that they destroyed all the "C" blocks so that no more articles mentioning his name could be printed. The British commander's orders to burn only public buildings and strict discipline among the British troops are credited with preserving the city's private buildings.

The troops then turned north down Pennsylvania Avenue toward the White House. First Lady Dolley Madison remained there after many of the government officials—and her own bodyguard—had already fled, gathering valuables, documents, and other items of importance, notably the Lansdowne Portrait, a full-length painting of George Washington by Gilbert Stuart. She was finally persuaded to leave moments before British soldiers entered the building. Once inside, the soldiers found the dining hall set for a dinner for 40 people. After eating all the food, they took souvenirs and then set the building on fire.

Fuel was added to the fires that night to ensure they would continue burning into the next day; the flames were reportedly visible as far away as Baltimore and the Patuxent River.

During the occupation, a hurricane which included a tornado passed through, damaging both the invaders and the city. It not only helped to batter the invading troops, but also to preserve these historic buildings by dampening the fires.[2] The occupation of Washington lasted about 26 hours, and within a week the British troops were dispatched to their next target, Baltimore. President Madison and the rest of the government returned to the city but were in such disarray that they were unable to prosecute the war effectively. 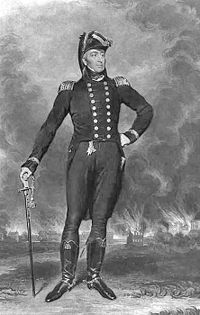 The thick sandstone walls of the White House survived, although scarred with smoke and scorch marks. Although a popular myth has it that the modern name "White House" came from the rebuilt mansion being painted white to cover smoke damage, the name is recorded earlier than the war, and it was first painted white in 1798, before it was used by any President.[3] Reconstruction of the Capitol building did not begin until 1815, and it was completed in 1830.

Of Britain's four objectives in its retaliatory invasion of the United States—Lake Champlain, New Orleans, Louisiana; Baltimore, Maryland; and Washington, D.C.—this was the only successful attack. The British had successfully diverted the attention of Washington away from the war and prevented further American incursions into Canada, and had landed a humiliating blow to the Americans, though American field commanders repelled almost every British attack for the remainder of the war. The attack was not as demoralizing as Cockburn intended, but it did contribute to the signing of the Treaty of Ghent later that year.