A Burns supper is a celebration of the life and poetry of the poet Robert Burns, author of many Scots poems. The suppers are normally held on or near the poet's birthday, January 25th. It is sometimes also known as Robert Burns Day (or Robbie Burns Day or Rabbie Burns Day) but more commonly known as Burns Night (Scots: Burns Nicht).

Burns suppers typically include haggis (the traditional Scottish dish celebrated by Burns in Address to a Haggis), Scotch whisky, and recitations of Burns' poetry. Burns' status as a cultural icon is maintained through these annual celebrations of his birthday, which take place all over Scotland as well as throughout the Scottish diaspora. The occasion reflects the Scottish character and lifestyle: thriftiness, pride in their culture particularly as represented by Burns, and not without humor. 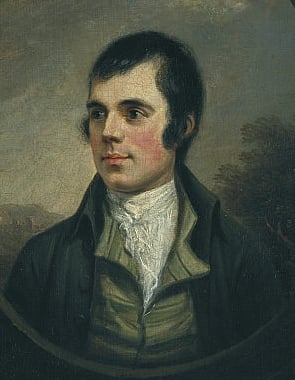 Robert Burns (January 25, 1759 - July 21, 1796) was a popular Scottish poet and lyricist. He is also known familiarly as Rabbie Burns, the National Bard, Bard of Ayrshire and the Ploughman Poet, and various other names and epithets, including Scotland's favourite son, Robden of Solway Firth and simply the Bard.[1] He is widely regarded as the national poet of Scotland and is celebrated worldwide. He is the best known of the poets who have written in the Scots language, although much of his writing is also in English and a light Scots dialect, accessible to an audience beyond Scotland. He also wrote in standard English, and in these writings his political or civil commentary is often at its bluntest.

Burns is regarded as a pioneer of the Romantic movement, and after his death he became a cultural icon in Scotland and among the Scottish diaspora around the world. Celebration of his life and work became almost a national charismatic cult during the nineteenth and twentieth centuries, and his influence has long been strong on Scottish literature. In 2009 he was chosen as the greatest Scot by the Scottish public in a vote run by Scottish television channel STV.[2]

As well as making original compositions, Burns also collected folk songs from across Scotland, often revising or adapting them. His poem (and song) "Auld Lang Syne" is often sung at Hogmanay (the last day of the year), and "Scots Wha Hae" served for a long time as an unofficial national anthem of the country. Other poems and songs of Burns that remain well known across the world today include "A Red, Red Rose", "A Man's a Man for A' That", "To a Louse", "To a Mouse", "The Battle of Sherramuir", "Tam o' Shanter" and "Ae Fond Kiss". His poem, "Address to a Haggis," is an integral part of the Burns supper celebration.

History of the Burns Supper

The earliest suppers were held at the end of the eighteenth century in Ayrshire by Robert Burns' friends. They held the first supper in memoriam at Burns Cottage in Alloway on July 21, 1801, the fifth anniversary of his death.

The night included a meal of haggis, performances of Burns’ work, and a speech in honor of the great Bard (now known as the Immortal Memory). The night was such a resounding success they decided to hold it again (this time in honor of his birthday).

In 1892, they held the first Burns supper on what they thought was his birthday, on January 29th. However, in 1803 they discovered from the Ayr parish records that the correct date was January 25, 1759. Since then suppers have been held on Burns' birthday, January 25th.[3]

The Burns Supper has become an institution of Scottish life: It is a night to celebrate the life and works of the national Bard. It ranges from an informal gathering of friends to a magnificent event with a formal dinner.

Burns suppers are most common in Scotland and Northern Ireland but occur wherever there are Burns Clubs, Scottish Societies, expatriate Scots, or aficionados of Burns' poetry. There is a particularly strong tradition of them in southern New Zealand's main city Dunedin, of which Burns' nephew Thomas Burns was a founding father.

A hearty feast of haggis (a traditional Scottish dish celebrated by Burns in Address to a Haggis) served with neeps and tatties (Scots: swede, yellow turnip or rutabaga, and potatoes, boiled and mashed separately) and a "dram" (a glass of Scotch whisky) is served, some of Burns’ poems and songs are recited, and tributes are made to the great Bard. Also included, at least in all formal suppers, is a piper who welcomes the guests and leads the procession for the entrance of the haggis.

Formal events are hosted by organizations such as Burns clubs, the Freemasons, or St Andrews Societies; they occasionally end with dancing when ladies are present.

Format of the celebration

A piper generally greets the guests, who gather and mix as at any informal party.[4] At less formal gatherings, traditional Scottish music is played.[5]

The host says a few words welcoming everyone to the supper and perhaps stating the reason for it.[4]

All the guests are seated and grace is said, usually using the Selkirk Grace, a well-known thanksgiving said before meals that uses the Scots language. Although attributed to Burns, the Selkirk Grace was already known in the seventeenth century as the "Galloway Grace" or the "Covenanters' Grace". It came to be called the Selkirk Grace because Burns was said to have delivered it at a dinner given by the Earl of Selkirk. 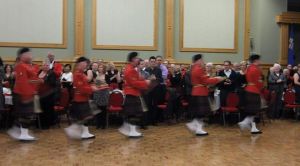 Piping in the haggis

Some hae meat an canna eat,
And some wad eat that want it;
But we hae meat, and we can eat,
And sae the Lord be thankit.[4]

The supper starts with the soup course. Normally, a Scottish soup, such as Scotch broth, potato soup, cullen skink, or cock-a-leekie, is served.

Piping in the haggis

Everyone stands as the haggis is brought in. It is usually brought in by the cook on a large dish, generally while a bagpiper leads the way to the host's table, where the haggis is laid down. "A Man's A Man for A' That", "Robbie Burns Medley" or "The Star O' Robbie Burns" might be played. The host, or perhaps a guest, then recites the Address to a Haggis. 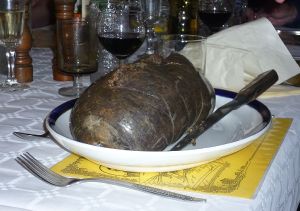 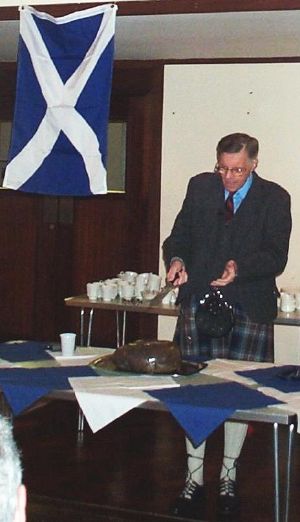 Recitation of the poem Address to a Haggis by Robert Burns is an important part of the Burns supper.

Address to a Haggis

At the line His knife see rustic Labour dicht, the speaker normally draws and sharpens a knife. At the line An' cut you up wi' ready slicht, he plunges it into the haggis and cuts it open from end to end. When done properly, the "ceremony" is a highlight of the evening. 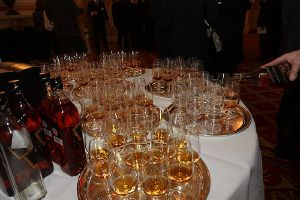 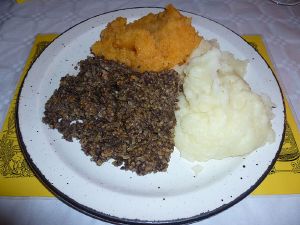 Haggis served wi tatties an neeps (with potatoes and swede)

At the end of the poem, a whisky toast will be proposed to the haggis, and the company will sit down to the meal. The haggis is traditionally served with mashed potatoes (tatties) and mashed swede (neeps).[5]

A dessert course, cheese courses, coffee, etc., may also be part of the meal. The courses normally use traditional Scottish recipes. For instance, dessert may be cranachan or tipsy laird (whisky trifle), followed by oatcakes and cheese, all washed down with the "water of life" (uisge beatha), Scotch whisky.

When the meal reaches the coffee stage, various speeches and toasts are given.

The main speaker gives a speech remembering some aspect of Burns' life or poetry. It may be either light-hearted or serious and may include the recitation of a poem or a song by Burns. A toast to the Immortal Memory of Robert Burns then follows.[5]

Address to the Lassies

This was originally a short speech given by a male guest in thanks to the women who had prepared the meal. However, it is now much more wide-ranging and generally covers the male speaker's view on women. It is normally amusing and not offensive, particularly since it will be followed by a reply from the "lassies" concerned. The men drink a toast to the women's health.

Reply to the Laddies

This is occasionally (and humorously) called the "Toast to the Laddies". Like the previous toast, it is generally now quite wide-ranging. A female guest will give her views on men and reply to any specific points raised by the previous speaker. Like the previous speech, it should be amusing but not offensive. Quite often, the speakers giving this toast and the previous one will collaborate so that the two toasts complement each other.

After the speeches there may be singing of songs by Burns (such as Ae Fond Kiss, Parcel o' Rogues and A Man's a Man) and more poetry (such as To a Mouse, To a Louse, Tam o' Shanter, The Twa Dogs and Holy Willie's Prayer).

That may be done by the individual guests or by invited experts, and it goes on for as long as the guests wish. It may include other works by poets influenced by Burns, particularly poets writing in Scots. Foreign guests may also be invited to sing or say works from their land.

Finally, the host will call on one of the guests to give the vote of thanks. Then, everyone is asked to stand, join hands, and sing Auld Lang Syne to bring the evening to an end.