Bursitis is the inflammation of one or more bursae, the fluid-filled sacs that rest adjacent to tendons, bones, and other tissues and create a smooth gliding surface and cushion. For example, bursae are located adjacent to tendons in elbow, shoulder, ankle, knee, heel, and hip. When bursitis takes hold, perhaps due to overuse, injury, or infection, the movement that relies on the inflamed bursa becomes rough and painful.

Bursitis is usually a temporary condition that causes pain and may restrain motion, and in chronic can lead to muscle deterioration; it generally does not cause deformity. It is common among people who are repeatedly using a limb or using it with excessive pressure, such as in baseball, tennis, running, shoveling snow, house painting, and so forth. The appearance of bursitis reflects on how harmoniously the human body normally works, allowing the muscles, tendons, and bones to interact seamlessly because of these small sacs.

Bursitis may be associated with other diseases, such as arthritis, thyroid disease, and diabetes (NYPH 2007). 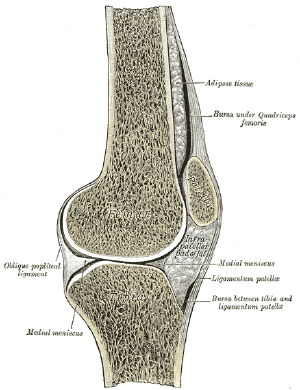 A bursa (plural bursae or bursas) is a small, closed, fluid-filled sac that is composed of white fibrous tissue. Bursae rest at the points where internal functionaries, like muscles and tendons, slide across bone. Bursae are found around almost every major joint of the body, providing a cushion between bones and tendons and/or muscles around the joint, and acting as a smooth and almost frictionless gliding surface as they move back and forth across each other. With hundreds of them throughout the body, bursae provide this surface for all motion, making movement normally painless.

Bursitis is the inflammation of one or more of these bursae, or small sacs of synovial fluid. Inflammation is a localized protective response of a body's living tissue to injury, infection, irritation, or allergy. Inflammation is characterized by the following quintet: Redness (rubor), heat (calor), swelling (tumor), pain (dolor), and dysfunction of the organs involved (functio laesa).

When bursitis occurs, the individual can experience pain, localized tenderness, and limited motion, as well as swelling and redness if the inflamed bursa is close to the surface (NYPH 2007). Movement of tendons and muscles over the inflamed bursa causes it to become more inflamed, perpetuating the problem. In chronic bursitis, there may be repeated attacks of pain, tenderness, and swelling, possibly leading to deterioration of the muscles (NYPH 2007).

The major bursae are located near the large joints, such as shoulders, hips, elbows, and knees (NYPH 2007). These tend to be the most common areas affected with bursitis.

Bursitis is commonly caused by repetition of movement or excessive pressure. Elbows and knees are the most commonly affected because they are rested upon more than many parts of the body with bursae and they also get the most repetitive use. Individuals that are overusing a limb or using it incorrectly, or that are in poor physical condition and with bad postures are at risk of developing bursitis (NYPH 2007). When there is compression of the bursa on a regular basis, such as a person who sleeps on the side and places significant pressure on the hip or shoulder for a long time, the person may become at risk of bursitis when continuing movement of this compressed area (BS 2005).

The other main cause of bursitis is traumatic injury, which can cause swelling of the bursae. The swelling itself causes irritation because the sac will no longer fit in the small area between the bone and the functionary. When the bone begins to increase pressure on the bursa, bursitis ensues.

Infection can be a probable cause as well (NYPH 2007). Inflammation of bursae can also be caused by other inflammatory conditions, such as rheumatoid arthritis. Scoliosis can also be a cause of bursitis of the shoulders, although this is rare.

Among the more common types of bursitis are the following.

The symptoms of bursitis can be as varied as the causes and types of bursitis. It can range from an achy pain and stiffness in the local area of the joint to a burning sensation in the area surrounding the whole joint with the inflamed bursa. The pain usually escalates during and after activity, with the bursa and the surrounding joint area becoming stiffer the following day.

Apart from pain, one finds localized tenderness and limited motion to be common among people who have bursitis. Swelling and redness may occur if the inflamed bursa is close to the surface (NYPH 2007). Repeated attacks of pain, swelling, and tenderness, possibly leading to the deterioration of muscles and a limited range-of-motion, is a case of chronic bursitis.

Firstly, an analysis of complete medical history and physical examination is mandatory. As the symptoms of bursitis resemble other medical conditions or problems, an accurate diagnosis is important. So other intensive diagnostic procedures are also employed. A sample of fluid from the bursa is obtained to rule out infections and to find the cause of the bursitis. Other tests that may be run are x-rays, computed tomography scan (CT or CAT scan), magnetic resonance imaging (MRI), anthrogram to provide evidence of a tear, opening, or blockage, and aspiration to rule out infection or gout as causes (NYPH 2007).

Treatment depends on whether or not infection is involved, and the causes and symptoms. A common treatment is rest for the affected area, reducing swelling by ice, use of NSAIDs (nonsteroidal, anti-inflammatory drugs) to reduce inflammation and relieve pain, using a compression wrap to support and protect the bursa, elevating the affected area, and using topical pain relievers (NYPH 2007; Mayo 2007). Cortisone injections may be used, as well as physical therapy. In the case of infection, antibiotics may be used, and in worst case scenarios, surgical drainage and removal of the infected bursa (bursectomy) (NYPH 2007).

Prevention can be aided by regular stretching exercises, which can loosen the muscles and lengthen tendon connections around the bursa; relaxation techniques can also help reduce pressure on the bursa. Protective equipment, such as knee pads, can reduce injury and pressure on the joint area. Immediate treatment can reduce the risk of the bursitis becoming more severe.