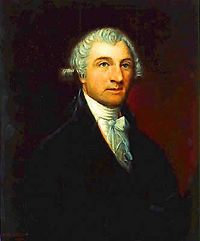 Dr. William Thornton (May 20, 1759 – March 28, 1828) was an early American inventor, painter and architect who designed the United States Capitol. He also served as the first Architect of the Capitol and first Superintendent of the United States Patent Office. After spending his childhood in England, where he then trained as a physician, he returned to his place of birth in the British Virgin Islands in 1786 where he saw his mother for the first time since boyhood and also came face to face with the source of his income–half interest in a sugar plantation and ownership of some 70 slaves, the possession of which had begun to trouble him. Eager to achieve fame (and undoubtedly some expiation) in the cause of anti-slavery, he emigrated to the United States of America in the autumn of 1786, moving to Philadelphia. His unsuccessful efforts to lead a contingent of free black Americans to join the small British settlement of London blacks at the mouth of the Sierra Leone River in West Africa were looked on favorably by Philadelphia's Quaker establishment. Some leaders of the new republic—notably James Madison, with whom he lodged at Mrs. Mary House's prominent boarding establishment in 1787 and 1788—were cognizant of Thornton's abolitionist activities. In 1788, he became an American citizen. Thornton married Anna Maria Brodeau, daughter of a school teacher, in 1790. From 1789, he started entering design competitions for important new public buildings, and consequently gave the new nation some of its best well-known building, including the United States Capitol building, symbolic of its democracy and of aspirations to enable all citizens to live lives of dignity and freedom.

From an early age William Thornton displayed interest and discernible talent in "the arts of design," to employ an eighteenth-century term that is particularly useful in assessing his career. Thornton was born on Jost Van Dyke in the British Virgin Islands, West Indies, in a Quaker community at Tortola,[1] where he was heir to sugar plantations. He was sent to England at age five to be educated.[1] Thornton was brought up strictly by his father's relations, Quakers and merchants, in and near the ancient castle town of Lancaster, in northern Lancashire, England. There was never any question of his pursuing the fine arts professionally—he was to be trained for a useful life, according to the Quaker ways. Thus, despite the fact that he had a sizable income, young Thornton was apprenticed for a term of four years (1777-1781), to a practical physician and apothecary in the Furness district of Lancashire (now Cumbria).

The earliest of Thornton's known writings, a journal he began during his apprenticeship, records almost as many entries for drawing and sketching as notes on medical treatments and nostrums. His subjects were most often flora and fauna, but he also did portraits, landscapes, historical scenes, and studies of machinery, such as the Franklin stove, and managed to construct a camera obscura. This pattern continued when he enrolled as a medical student in the University of Edinburgh in 1781. The architecture of Edinburgh, especially that of the New Town that was building, surely exerted considerable influence. More direct evidence of his interest in architecture is found in the landscapes and sketches of castles he drew while traveling about Scotland, notably in the Highlands, during these years.

In 1783 Thornton went to London to continue his medical studies; characteristically, he also found time to attend lectures at the Royal Academy. The following year he was off to the Continent, carrying a letter of introduction to Benjamin Franklin, written by his mentor and distant cousin Dr. John Coakley Lettsome. He received his medical degree in 1784 at the University of Aberdeen.[1]

Thornton then spent time in Paris, before returning to Tortola in 1786.[1] There, he saw his mother for the first time since boyhood, where he came face to face with the source of his income—half interest in a sugar plantation and ownership of some 70 slaves, the possession of which had begun to trouble him.

Eager to achieve fame (and undoubtedly some expiation) in the cause of anti-slavery, he emigrated to the United States of America in the fall of 1786, moving to Philadelphia. His unsuccessful efforts to lead a contingent of free black Americans to join the small British settlement of London blacks at the mouth of the Sierra Leone River in West Africa were looked on favorably by Philadelphia's Quaker establishment. Some leaders of the new republic—notably James Madison, with whom he lodged at Mrs. Mary House's prominent boarding establishment in 1787 and 1788—were cognizant of Thornton's abolitionist activities. In 1788, he became an American citizen. Thornton married Anna Maria Brodeau, daughter of a school teacher, in 1790.[2] 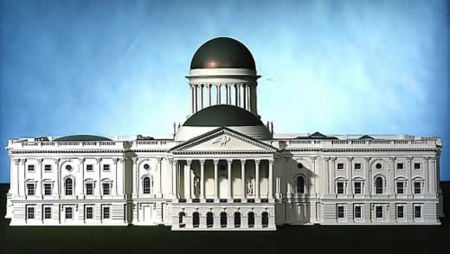 In 1789, after briefly practicing medicine and pursuing an interest in steamboats, Thornton submitted a design to the architectural competition for the Library Company of Philadelphia's new hall.[1] His design won but was somewhat departed from during actual construction. Library Hall was described as the first building in the "modern [classical] style" to be erected in the new nation's leading city.

During his visit to Tortola between October 1790 and October 1792, Thornton learned of the design competitions for the U.S. Capitol and the President's House to be erected in the new Federal City on the banks of the Potomac. Because a design for the Capitol had not been chosen, he was allowed to compete upon his return to Philadelphia. Between July and November 1792 the Washington administration examined closely designs submitted by the French emigré architect Etienne Sulpice Hallet and Judge George Turner. Hallet and Turner had been summoned to the Federal City in August 1792 to present their ideas to the Commissioners of the District of Columbia and local landholders. Both were then encouraged to submit revisions of their designs to accommodate new conditions and requirements. At the beginning of November Turner's new designs were rejected.

The painter John Trumbull handed in Washington Thornton's still "unfinished" revised plan of the Capitol building on January 29, 1793, but the president's formal approbation was not recorded until April 2, 1793. Thornton was inspired by east front of the Louvre, as well as the Pantheon for the center portion of the design.[3] After more drawings were prepared, enthusiastic praise of Thornton's design was echoed by Jefferson: "simple, noble, beautiful, excellently distributed." (Jefferson was a fan of Thronton's work.[4]) For his winning design, Thornton received a prize of $500 and a city lot.

The execution of the design was entrusted to the supervision of Étienne Sulpice Hallet and James Hoban. Hallet proceeded to make numerous revisions, including removing the rotunda under which Washington was to be enshrined upon his death. So, on September 12, 1794, the President appointed Thornton one of the three Commissioners of the Federal District in charge of laying out the new federal city and overseeing construction of the first government buildings, including the Capitol of which he became supervisor and remained in charge until 1802. Despite important changes and additions, especially by Latrobe and Bullfinch, much of the design of the facade of the central portion of the Capitol is his.[5] 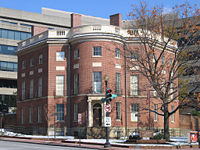 As a consequence of winning the Capitol competition, Thornton was frequently asked to give ideas for public and residential buildings in the Federal City. He responded with designs on several occasions during his tenure as a commissioner, less so after 1802 when he took on the superintendency of the Patent Office.

It was during this time he was asked to design a home for Colonel John Tayloe. The Tayloe House, also known as The Octagon House, in Washington, D.C., was erected between 1799 and 1800. The house served as a temporary "Executive Mansion" after the burning of the White House by the British and the house's study was where President Madison signed the Treaty of Ghent ending the War of 1812. The house also served as the headquarters of the American Institute of Architects.[6]

Around 1800, he designed Woodlawn for Major Lawrence Lewis and his wife, Eleanor (Nelly) Parke Custis, on land that George Washington, his uncle and her step-grandfather, willed them. Sometime around 1808 he designed Tudor Place for Thomas Peter and his wife Martha Custis Peter, granddaughter of Martha Washington.[7]

Many buildings designed by Thornton have been added to the National Register of Historic Places including:

Superintendent of the Patent Office

Upon the abolition of the board in 1802, President Jefferson appointed Thornton the first Superintendent of the Patent Office. When Washington was burned by the British in 1814, Thornton convinced them not to burn the Patent Office because of its importance to mankind. He held the position from June 1, 1802, until his death in 1828 in Washington, DC. He's buried in Congressional Cemetery on Capitol Hill.

William Thornton was a skilled architect, who was admired in his time and continues to win acclaim. He designed numerous symbolic buildings for the United States government and also devised the blueprints for homes belonging to many famous early Americans. Thornton's services were in high demand during his lifetime. Several of the buildings he designed have been commemorated as Historic Places.