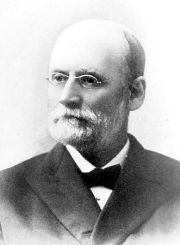 William Torrey Harris (September 10, 1835 – November 5, 1909) was an American educator, philosopher, and lexicographer. He served as the U.S. Commissioner of Education, during which time he made significant reforms based on the Hegelian philosophy of education. Although the Idealist philosophy declined in popularity, many of Harris' changes were practical improvements that have stood the test of time. He expanded the public school system to include grade school and high school, promoting the inclusion of the humanities and art in the curriculum, and the addition of libraries to all schools. He was also involved in the establishment of the first English-speaking kindergarten in America. Although criticized for his approach as creating students without individuality prepared only to work for the benefit of the state, Harris held strong Christian beliefs are regarded strict morality as essential to the healthy development of the individual, who would then function well in society.

William Torrey Harris was born on September 10, 1835, in North Killingly, Connecticut, into a Congregationalist farming family. He attended Phillips Andover Academy, Andover, Massachusetts. After that, he completed two years at Yale, but then dropped out and moved west to teach in a grammar school in St. Louis, Missouri (1857-1859). On December 27, 1858, he married his childhood friend Sarah Tully Bugbee.

In 1859, he became a principal in one of the public schools in St. Louis and carried that duty for almost nine years. In 1867 he was appointed assistant superintendent of the whole St. Louis school system, and in 1868 he became its superintendent. In 1873 he established, with Susan Blow, America's first permanent public kindergarten. It was in St. Louis where William Harris instituted many influential ideas to solidify both the structural institution of the public school system and the basic philosophical principles of education.

Under the influence of Henry C. Brockmeyer, Harris became interested in German philosophy, particularly Hegel. Brockmeyer and Harris gathered a small group of intellectuals in St. Louis and studied Hegel’s works. They promoted the view that the entire unfolding was part of a universal plan, a working out of an eternal historical dialectic, as theorized by Hegel. The group grew to become, in 1866, the St. Louis Philosophical Society. In 1874 Harris formed another society, the Kant Club. He founded and edited, in 1867, the first philosophical periodical in America, the Journal of Speculative Philosophy, serving as editor until 1893.

Harris resigned from his superintendent duty in 1880, and decided to travel to Europe to study educational systems there. He became associated with Bronson Alcott's Concord School of Philosophy from 1880 to 1889, serving as a faculty member on its first session. He lectured primarily on Hegelian philosophy. He participated in all summer sessions of the school, until the school’s closing in 1888 when Alcott died.

In 1889, President Benjamin Harrison appointed Harris Commissioner of Education. Harris fulfilled that duty until 1906. He did his best to organize all phases of education on the principles of philosophical pedagogy as espoused by Hegel, Kant, Fichte, Froebel, Pestalozzi and many other idealist philosophers. In 1899, the University of Jena gave him the honorary degree of Doctor of Philosophy.

William T. Harris devoted much of his career to educational reforms. His changes lead to the expansion of the public school curriculum to make the high school an essential institution to the individual. He included art, music, scientific, and manual studies in the curriculum, and was also largely responsible for encouraging all public schools to acquire a library. Harris was also responsible for the grade school system, which continues to be used today.

Harris found great inspiration for his work in German philosophy, particularly in Hegel. He believed that education should be the top priority of the government, as it is a number one factor in building a strong republic. Education promotes the development of "self-activity,” that is, the awareness that every individual is a subject and plays an important role in the world. He claimed that "education is the process through which the individual is led to attain his freedom" (Twentieth Annual Report, 41).

Harris, similar to Hegel, believed that one’s freedom is connected with institutions. There is no freedom on one’s own, because we all live in the social world that is embodied in different institutions: nation-state, church, family, and so forth. In order to achieve freedom, one has to learn how to live in the world of institutions. Harris saw education as the tool to do that:

Education practices the youth in the habits and activities which are necessary to social life, and secures his cooperation in realizing the ideals set up by the conscience and reason of the people...It must make the individual obedient to the requirements of the social institutions under which he lives. (The History and Philosophy of Education, 28)

Harris believed that education has to be carried out in three phases:

Because of his emphasis on the social world, Harris advocated the inclusion of the humanities and the arts in the curriculum. He also supported the teaching of morality in schools, believing that schools need to be grounded in Christian principles. However, he also advocated for the separation of church and school.

Harris’ work as Commissioner of Education, where he applied his educational theories, was frequently criticized as serving its own means. His critics objected that he was a proponent of self-alienation in order to better serve the great industrial nation of America. In his book The Philosophy of Education Harris wrote:

Ninety-nine [students] out of a hundred are automata, careful to walk in prescribed paths, careful to follow the prescribed custom. This is not an accident but the result of substantial education, which, scientifically defined, is the subsumption of the individual...The great purpose of school can be realized better in dark, airless, ugly places.... It is to master the physical self, to transcend the beauty of nature. School should develop the power to withdraw from the external world. (Harris, 1893)

It appeared that Harris wanted to use education to subjugate individuality in order for one to better serve the whole. His defenders, on the other side, claimed that Harris, a devout Christian, was quite concerned with the development of morality and discipline within the individual. He believed those values could systematically be instilled into the students, promoting common goals and social cooperation, with a strong sense of respect for and responsibility towards one’s society.

Harris' influence has been only momentarily recognized, being generally disregarded and misunderstood by historians. An extreme emphasis on discipline has become the most glaring misrepresentations of his philosophy. Harris was responsible for introducing Hegelian philosophy of education into the American school system.

From a theoretical standpoint, Harris' adherence to German Idealism was partly responsible for his unpopularity. However, he contributed toward the development of the U.S. educational system in ways that have benefited all children: he expanded the primary school curriculum, putting more emphasize on humanities and arts; he originated the concept of "high school;" and he encouraged every school to have a library. He also advocated professional teacher education.

Harris was also a supporter of the kindergarten movement started in Germany by Friedrich Froebel, being involved in the establishment of the first permanent kindergarten, as part of public education in St. Louis.