It is a major breeding site for migratory birds. A wide range of species include flamingos, broad-billed sandpipers, pelicans, and terns. The park's vast expanses of mudflats provide a home for over two million migrant shorebirds from northern Europe, Siberia, and Greenland. The region's mild climate and absence of human disturbance makes the park one of the most important sites in the world for these species. The nesting bird population is also noted for its great numbers and diversity—between 25,000 and 40,000 pairs belonging to 15 species—making the largest colonies of water birds in West Africa.

The 12,000 km² (4,633mi²) National Park was created by decree on June 24, 1976 and established in 1978. The wetlands area was designated a Wetland of International Importance under the Ramsar Convention in 1982. Two outlying satellite reserves, Baie du Lévrier Integral Reserve on Cap Blanc and Cuevecillas Integral Reserve on the Côte des Phoques, were added in 1986. It was inscribed as a UNESCO World Heritage Site in 1989.

The surrounding waters are some of the richest fishing waters in western Africa and serve as nesting grounds for the entire western region. The contrast between the harsh desert environment inland and the biodiversity of the marine zone has resulted in a land- and seascape of outstanding natural significance.

Battering surf and shifting sand banks characterize the entire length of the park's shoreline. The Ras Nouadhibou (formerly Cap Blanc) peninsula, which forms Dakhlet Nouadhibou (formerly Lévrier Bay) to the east, is 50 kilometers long and up to 13 kilometers wide. The peninsula is administratively divided between Western Sahara and Mauritania, with the Mauritanian port and railhead of Nouadhibou located on the eastern shore. Dakhlet Nouadhibou, one of the largest natural harbors on the west coast of Africa, is 43 kilometers long and 32 kilometers wide at its broadest point. Fifty kilometers southeast of Ras Nouadhibou is Arguin. In 1455 the first Portuguese installation south of Cape Bojador (in present-day Western Sahara) was established at Arguin. Farther south is the coastline's only significant promontory, seven-meter-high Cape Timiris. From this cape to the marshy area around the mouth of the Senegal River, the coast is regular and marked only by an occasional high dune.

The Coastal Zone, or Sub-Canarian Zone, extends the length of the approximately 754-kilometer-long Atlantic coast. Prevailing oceanic trade winds from the Canary Islands modify the influence of the harmattan, producing a humid but temperate climate. Rainfall here is minimal; in Nouadhibou it averages less than three centimeters annually and occurs between July and September. Temperatures are moderate, varying from mean maximums of 28°C and 32°C for Nouadhibou and Nouakchott, respectively, to mean minimums of 16°C and 19°C.

The park is host to one of the world's most diversified communities of nesting piscivorous birds in the world. At least 108 bird species have been recorded, representing both Palaearctic and Afrotropical realms. Wintering shorebirds number over three million and include hundreds of thousands of black tern (Chlidonias nigra) and flamingo {Phoenocopterus ruber), ringed plover (Charadrius hiaticula), grey plover (Pluvialis squatarola), knot (Calidris canutus), redshank (Tringa totanus) and bar-tailed godwit (Limosa lapponica). 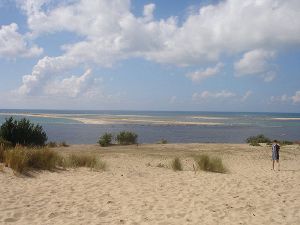 The area is one of the most important wintering grounds for European spoonbill (Platalea leucorodia leucorodia). Breeding birds include white pelican (Pelecanus onocrotalus), reed cormorant (Phalacrocorax africanus), gull-billed tern (Gelochelidon nilotica), Caspian tern (Hydroprogne caspian), royal tern (Sterna maxima) and common tern (Sterna hirundo), together with several species or subspecies with an African distribution, such as endemic heron (Ardea cinerea monicae) and spoonbill (Platalea leucorodia balsaci) and western reef heron (Egretta gularis). Much of the breeding is on sand banks, including the islands of Tidra, Niroumi, Nair, Kijji, and Arguim.

Several species of sea turtle and dolphin, used by the fishermen to attract shoals of fish, can also be found.

On coastal dunes vegetation is rare. At the foot of ridges, however, large tamarisk bushes, dwarf acacias, and swallowworts may be found. Some high grass, mixed with balsam, spurge, and spiny shrubs, grows in the central region. The north has little vegetation.

Despite the Almoravid domination of Spain in the eleventh and twelfth centuries, there seems to be little evidence of contact during that time between Mauritania and Europe. The inhospitable coastline of Mauritania continued to deter voyagers until the Portuguese began their African explorations in the fifteenth century. Lured by legends of vast wealth in interior kingdoms, the Portuguese established a trading fort at Arguin, southeast of Cap Blanc (present-day Ras Nouadhibou), in 1455. The king of Portugal also maintained a commercial agent at Ouadane in the Adrar in an attempt to divert gold traveling north by caravan. Having only slight success in their quest for gold, the Portuguese quickly adapted to dealing in slaves. In the mid-fifteenth century, as many as 1,000 slaves per year were exported from Arguin to Europe and to the Portuguese sugar plantations on the island of Sáo Tomé in the Gulf of Guinea.

Because of its rich fishery and strategic location, the territory was highly coveted and disputed by the European colonial powers of Portugal, France, England, Prussia/Germany, and the Netherlands.

With the merger of the Portuguese and Spanish crowns in 1580, the Spaniards became the dominant influence along the coast. In 1633, however, they were replaced by the Dutch, who were the first to begin exploiting the gum arabic trade. Produced by the acacia trees of Trarza and Brakna and used in textile pattern printing, this gum arabic was considered superior to that previously obtained in Arabia. By 1678 the French had driven out the Dutch and established a permanent settlement at Saint Louis at the mouth of the Senegal River, where the French Company of the Senegal River had been trading for more than 50 years.

The Maures (Moors), with whom the Europeans were trading, considered the constant rivalries between European powers a sign of weakness, and they quickly learned the benefits of playing one power against another. For example, they agreed to give monopolies to both the French and the Dutch. The Maures also took advantage of the Europeans whenever possible, so that when the French negotiated with the amir of Trarza to secure a monopoly on the gum arabic trade, the amir in exchange demanded a considerable number of gifts. Thus began the custom of the Maures expecting an annual payment for doing business with a government or a company. By 1763, the British had expelled France from the West African coast, and France recovered control only when the Congress of Vienna in 1815 recognized French sovereignty over the coast of West Africa from Cap Blanc south to Senegal.

The sinking of the Medusa 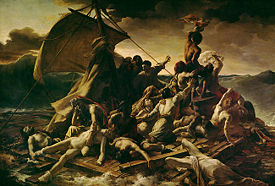 The Raft of the Medusa by Théodore Géricault, an oil on canvas, hangs in the Louvre Museum in Paris.

In June 1816, the French frigate Méduse embarked from Rochefort in western France, bound for the Senegalese port of Saint-Louis. The Meduse headed a convoy of three other ships: the storeship Loire, the brig Argus and the corvette Écho. The frigate's mission was to accept the British surrender of Senegal. The new French governor of Senegal, Colonel Julien-Désire Schmaltz, and his wife Reine Schmaltz were among the passengers. Viscount Hugues Duroy de Chaumereys had been appointed captain of the frigate, despite having spent little time aboard ships during the previous 20 years.[1][2]

In an effort to make good time, the Méduse overtook the other ships, but it drifted 100 miles (161 km) off course. On July 2, it ran aground on a sandbank off the West African coast, near today's Mauritania in the Banc d'Arguin. The grounding was widely blamed on Captain De Chaumereys perceived incompetence.[3][4] The crew's efforts to free the ship failed. On July 5, the passengers and crew began an attempt to travel the 60 miles (97 km) distance to the African coast in the frigate's six life boats. Although the Méduse was carrying 400 people, including 160 crew, there was space for only about 250. The remainder of the ship's complement — at least 146 men and one woman — piled onto a hastily-built raft that partially submerged once it was loaded. Seventeen crew members opted to stay aboard the grounded Méduse. The captain and crew aboard the other boats intended to tow the raft, but after only a few miles the raft was turned loose.

After 13 days at sea, on July 17, 1816, the raft was rescued by the Argus by chance. No particular search effort was made by the French for the raft.[5] When rescued, only 15 men were alive. They suffered from starvation, dehydration and madness. The incident became a huge public embarrassment for the French monarchy, only recently restored to power after Napoleon's defeat in 1815. The other boats became separated and most arrived at St Louis Island in Senegal. Some put ashore further along the coast and lost some of their party to heat and starvation. Of the 17 men that remained behind on the Méduse, only three were still alive when rescued by the British Navy on August 13th, 42 days later.

The local population comprises about 500 or so Imraguen tribesmen who live in seven villages within the park. They base their economy on subsistence fishing using traditional methods. 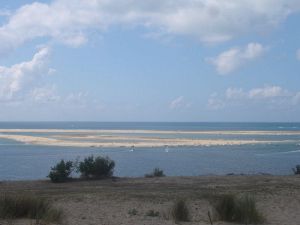 The Banc d'Arguin, created on June 24, 1976 by Decree No. 74 176/P/G and established as a National Park in 1978, is unique in a number of ways. It is the largest national park in Western Africa north of Zaire. As a coastal park, it consists of half marine and half terrestrial environments. The wilderness of the area, combining the austerity of the desert and the biodiversity of the marine zone, result in land and seascape of exceptional contrasting natural value. The traditional activities of the resident fishermen provide a unique cultural element.[6]

The wetlands area was designated a Wetland of International Importance under the Ramsar Convention in 1982. Two outlying satellite reserves, Baie du Lévrier Integral Reserve on Cap Blanc and Cuevecillas Integral Reserve on the Côte des Phoques, were added in 1986. It was inscribed as a UNESCO World Heritage Site in 1989.

The Banc d'Arguin National Park was established to protect both thenatural resources and the valuable fisheries, which makes a significant contribution to the national economy, as well as scientifically and aesthetically valuable geological sites. Although the park was created as a means of protecting its environment, overfishing by international fleets in the waters just off Banc d'Arguin, outside the park, is depleting fish resources and may cause a decline of the breeding colonies of fish-eating bird species.

In 2006 Mauritania sold fishing rights to the EU in exchange for external debt reduction, prompting arguments of overfishing, sustainability, neocolonialism, and the rights of local people. [7]

Retrieved from https://www.newworldencyclopedia.org/p/index.php?title=Banc_d%27Arguin_National_Park&oldid=1021452
Categories:
Hidden category:
This page was last edited on 8 July 2019, at 20:46.
Content is available under Creative Commons Attribution/Share-Alike License; additional terms may apply. See Terms of Use for details.