Artemisia is a large, diverse genus of mostly perennial and aromatic herbs and shrubs in the daisy family Asteraceae, characterized by alternate leaves and small flower heads. Many of the perhaps 400 species in the genus are valued for their essential oils or as ornamentals. Well-known species include wormwood, mugwort, tarragon, and sagebush.

Many of the plant components that are so vital to the survival and reproduction of the plants—leaves, flowers, volatile oils—also provide a larger value for humans. The leaves and essential oils are used medicinally, including the production of an anti-malarial compound from Artemisia annua. Various species are used for culinary purposes, with A. absinthium used in vermouth and absinthe, and A. dracunculus (tarragon) popular in French cuisine. Although many species are wind-pollinated, there is evidence of insect pollination for some species (Tkach et al. 2007), with the flowers offering nectar to the insects in exchange for pollination. The attractive foliage and colorful flower-heads of some species make them desirable ornamental plants. 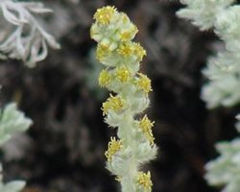 The family Asteraceae or Compositae, to which Artemisia belongs, is known as the aster, daisy, or sunflower family. It is the largest family of flowering plants in terms of number of species. According to the Royal Botanical Gardens of Kew, the family comprises more than 1,600 genera and 23,000 species. The name 'Asteraceae' is derived from the type genus Aster and refers to the star-shaped flower head of its members, epitomized well by the daisy. "Compositae," an older but still valid name (McNeill et al. 2006), means "composite" and refers to the unique inflorescence Inflorescences: How flowers are arranged on the stem The Seed Site. Retrieved June 11, 2008. (described below).

Asteraceae is a taxon of dicotyledonous flowering plants. In addition to the daisy and members of Artemisia, other well-known members of the family include lettuce, chicory, globe artichoke, safflower, dandelion, ragwort, and sunflower.

Plants belonging to the Asteraceae Information about Compositae or Asteraceae The Stanford Dahlia Project. Retrieved June 11, 2008. share all the following characteristics (Judd et al. 1999). None of these traits, taken separately, can be considered synapomorphic.

The most common characteristic of all these plants is a flower head (formerly composite flower), which is often thought to be a single flower but is actually a densely packed cluster of numerous, small, individual flowers, usually called florets (meaning "small flowers"). Plants with flower heads include daisies and sunflowers. Flower heads in members of the family Asteraceae typically comprise one or both of two kinds of florets. Florets occupying the outer perimeter of a flower head like that of a sunflower each possess a long strap-like petal, termed a ligule. Such florets, are called ray florets to distinguish them from the usually more numerous disc florets occupying the inner portion of the flower head (or disc). Each of the disc florets has fused petals forming a tubular corolla. 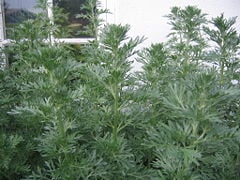 The genus Artemisia contains between 200 and 400 described species. It comprises hardy plants known for their volatile oils. Members of the genus range from dwarf herbaceous plants to tall shrubs. These are mostly perennial plants and are frequently aromatic (Mucciarelli and Maffei 2002). They all have alternate leaves, tubular florets, and small capitula, which usually occur as pendant, racemose, capitate, or paniculate inflorescences, rarely solitary (Mucciarelli and Maffei 2002). The fern-like leaves of many species are covered with white hairs.

They grow in temperate climates of the Northern Hemisphere and Southern Hemisphere, usually in dry or semi-dry habitats. They can be found from the Arctic alpine or mountainous areas to the dry deserts, and dominate the steppe communities of Asia, South Africa, and the New World (Mucciarelli and Maffei 2002). Many species are wind pollinated, although there is evidence for insect pollination in some species based on their having colorful capitula and sticky pollen (Tkach et al. 2007). Some species are self-pollinated (Tkach et al. 2007).

Some botanists split the genus into several genera, but DNA analysis (Watson et al. 2002) does not support the maintenance of the genera Crossostephium, Filifolium, Neopallasia, Seriphidium, and Sphaeromeria. Three other segregate genera, Stilnolepis, Elachanthemum, and Kaschgaria, are maintained by this evidence.

Common names used for several species include wormwood, mugwort, sagebrush, and sagewort, while a few species have unique names, notably tarragon (A. dracunculus) and southernwood (A. abrotanum). Occasionally some of the species are called sages, causing confusion with the Salvia sages in the family Lamiaceae.

Artemisia species are used as food plants by the larvae of a number of Lepidoptera species.

The aromatic leaves of various species of Artemisia are medicinal, such as Artemisia absinthium, absinth wormwood or common wormwood, which is used medicinally as a tonic, stomachic, febrifuge, and anthelmintic. Artemisinin, extracted from Chinese wormwood, Artemisia annua, is the active ingredient in the anti-malarial combination therapy 'Coartem', produced by Novartis and the World Health Organization. It is useful for strains of malaria resistant to quinine.

Some Artemisia species are valued for culinary purposes, although most have an extremely bitter taste. Absinth or common wormwood, A. absinthium, in addition to the above-mentioned medicinal purposes, is used in brewing wormwood beer and in such beverages as vermouth and absinthe. The aperitif vermouth (derived from the German word for wormwood, wermut) is a wine flavored with aromatic herbs, but originally with wormwood. Absinthe is a highly potent spirit that contains wormwood. Artemisia arborescens (tree wormwood, or sheeba in Arabic) is a very bitter herb indigenous to the Middle East that is used in tea, usually with mint. A. dracunculus (tarragon) is widely used as a herb, particularly important in French cuisine. It is one of the four fines herbes of French cooking, and particularly suitable for chicken, fish, and egg dishes. Tarragon is one of the main components of Bearnaise sauce.

Artemisia absinthium also is used to repel fleas and moths. The bitterness of the plant also led to its use by wet-nurses for weaning infants from the breast, as in this speech by Shakespeare from Romeo and Juliet Act I, Scene 3:

Various Artemisia species are grown as ornamental plants, with the fine-textured ones used for clipped bordering, with their attractive green, grayish, or silver foliage linking or contrasting those plants with stronger colors. All grow best in free-draining sandy soil, unfertilized, and in full sun.

Both absinthe wormwood, Artemisia absinthium, and mugwort, Artemisia vulgaris are used with such religious practices as Wicca, being believed to have multiple effects on the psychic abilities of the practitioner. The beliefs surrounding this genus are founded upon the strong association between the herbs of the genus Artemisia and the moon goddess Artemis, who is believed to hold these powers. She is known also by Diana, Selene, and Phoebe. In Hellenistic culture, Artemis was a goddess of the hunt, and protector of the forest and children.

It is also said that the genus Artemisia (which includes over 400 plants) may be named after an ancient botanist. Artemisia was the wife and sister of the Greek/Persian King Mausolus from the name of whose tomb we get the word mausoleum. Artemisia, who ruled for three years after the king's death, was a botanist and medical researcher, and died in 350 B.C.E. (GHO 2008).

In Russian culture, the fact that Artemisia species are commonly used in medicine, and their bitter taste is associated with medicinal effects, has caused wormwood to be seen as a symbol for a "bitter truth" that must be accepted by a deluded (often self-deluded) person. This symbol has acquired a particular poignancy in modern Russian poetry, which often deals with the loss of illusory beliefs in various ideologies. 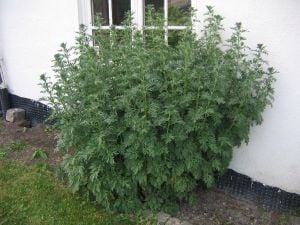 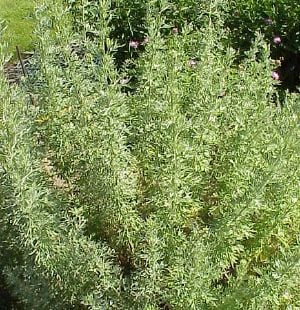 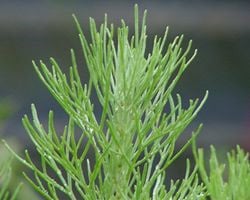 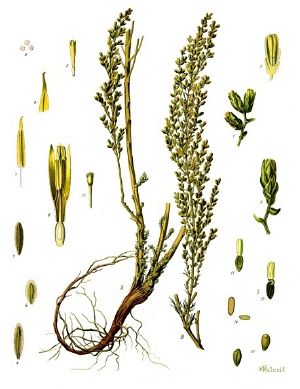 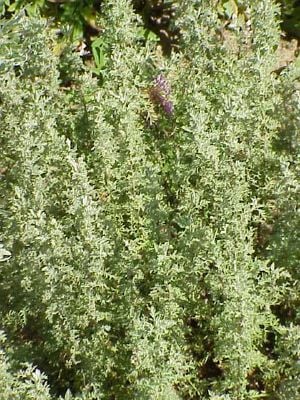 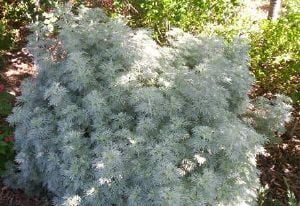