Lettuce is the common term for any plants of the genus Lactuca of the flowering plant family Asteraceae (or, alternatively, Compositae), and especially refers to plants of the commercially important species Lactuca sativa. The term lettuce also is used to refer to the edible, succulent leaves of L. sativa, which commonly are eaten raw in salads, but also may be eaten cooked. L. sativa is the most commonly used salad vegetable (Katz and Weaver 2003).

Lettuce provides values for the ecosystem and for humans. Ecologically, the wild and cultivated forms of lettuce provide food for diverse animals, including insects (such as the larvae of some Lepidoptera), rabbits, and deer. Thus, the lettuce plants are foundational for food chains. In terms of humans, the cultivated lettuce plants are eaten, whether cold and raw as typical in some countries (in salads, hamburgers, etc.) or cooked as typical in countries such as China. Although generally considered a poor source of nutrients, lettuce does provide many of the same nutrients as other green vegetables, albeit mostly in smaller amounts (Katz and Weaver 2003). Its low calories make it a popular diet food. There also is some medicinal use attributed to lettuce, including ingredients considered useful as a sleep inducer and sedative.

Both the English name and the Latin name of the genus are derived from lactis, the Latin word for "milk" or milk-forming, referring to the plants milky juice. The word sativa means "common" (Katz and Weaver 2003).

Lettuce belongs to the Asteraceae (or Compositae) family, which is known as the aster, daisy, or sunflower family. It is a taxon of dicotyledonous flowering plants, including chicory, globe artichoke, sunflower, yacón, safflower, and Jerusalem artichoke. The Asteraceae is the second largest family in the Division Magnoliophyta, with some 1,100 genera and over 20,000 recognized species. Only the orchid family (Orchidaceae) is larger.

Plants belonging to the Asteraceae share "all" the following characteristics (Judd et al., 1999). None of these traits, taken separately, can be considered synapomorphic.

The most common characteristic of all these plants is an inflorescence or flower head; a densely packed cluster of many small, individual flowers, usually called florets (meaning "small flowers"). The composite nature of the inflorescences of these plants led early taxonomists to call this family the Compositae.

Lettuce refers to those plants comprising the genus Lactuca. There are over 100 wild species of Lactuca, as well as the commercially grown Lactuca sativa.

Lettuce (Lactuca sativa) is a temperate annual or biennial plant most often grown as a leaf vegetable. The lettuce plant has a short stem initially (a rosette growth habit), but when it blooms the stem lengthens and branches, and it produces many flower heads that look like those of dandelions, but smaller. This is called bolting. When grown to eat, lettuce is harvested before it bolts. 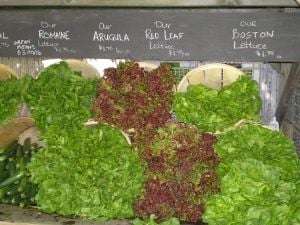 The following is another division, into six commonly recognized Cultivar Groups of lettuce; there are hundreds of cultivars of lettuce selected for leaf shape and color, as well as extended field and shelf life, within each of these Cultivar Groups: 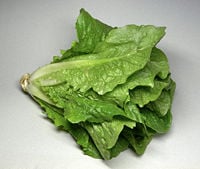 Some lettuces (especially iceberg) have been specifically bred to remove the bitterness from their leaves. These lettuces have a high water content with very little nutrient value. The more bitter lettuces and the ones with pigmented leaves contain antioxidants.

Lettuce and chicory output in 2005

The United States is the largest producer of lettuce in the world, with most production occurring in California and Arizona (Katz and Weaver 2005). Other areas with suitable climates include the Mediterranean Coast, the eastern portions of England, the Negev Desert in Israel, and parts of Australia. Major producers in terms of nations include Spain, Italy, France, Germany, and Greece.

Lettuce is considered to be a poor source of nutrients (Bender and Bender 2005). While it is rich in calcium, iron, and somewhat vitamins A and C (Herbst 2001), and has many of the same nutrients as other green vegetables, it contains these mostly in smaller amounts (Katz and Weaver 2003). Lettuce is low calorie and is a moderate source of fiber, it has essentially no fat or protein, and is considered a relatively low to moderate source of vitamins and minerals (Katz and Weaver 2003). Darker green leaves contain the most nutrients (Herbst 2001). 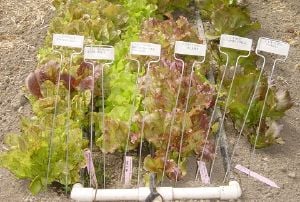 Lettuce is a source of antioxidants, which are considered to have anti-carcinogenic properties. Among the antioxidant compounds in lettuce are 0-beta-carotene (a precursor to vitamin A) and anthocyanin (which gives the red color in some varieties of lettuce)(Katz and Weaver 2003).

The oil from large lettuce seeds are used for cooking.

Some medicinal use is attributed to lettuce. The milky liquid in Lactuca sativa and its wild relatives, called latex, contains sesquiterpene lactones, which are the active ingredients in preparations used as a sleep inducer and sedative (Katz and Weaver 2003). Lettuce also is used in folk medicine to treat such ailments as coughs, nervousness, tension, and pain (Katz and Weaver 2003).

Lettuce grown in low light, low temperature conditions in greenhouses in the winter may accumulate high levels of nitrate, which can attribute to blue baby syndrome in infants and may be carcinogenic (Katz and Weaver 2003).