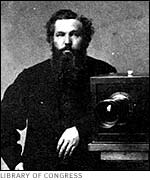 Alexander Gardner (October 17, 1821 – December 10, 1882) was an American photographer who is best known for his photographs of the American Civil War and his portraits of American President Abraham Lincoln.

As Mathew Brady's leading photographer during the early days of the Civil War, Gardner produced stark pictures of Union troops in battle, Lincoln at Antietam, the ruins of Richmond, and Robert E. Lee's surrender at Appomattox.

Many of Gardner's pictures were translated into woodcuts for Harper's Weekly and distributed to a national audience, serving as an early form of photojournalism. In 1866 he published Gardner's Photographic Sketch Book of the Civil War, an iconic work that for many Americans produced a defining image of the Civil War. His photos became foundational to American photography. They combined, for the first time, words and images in a sophisticated and moving account.

Gardner was born in Paisley, Scotland, in 1821 to James and Jean Gardner. His mother’s maiden name was Glenn, an Ayrshire family with many of its members being well-to-do farmers, eminent ministers, and prominent physicians.[1]

The family moved to Glasgow, where his father soon died, and the education of the family fell to his mother. Alexander was a ready scholar, and soon became proficient in astronomy, botany, chemistry and photography. When he was fourteen he was apprenticed to a jeweler, in Glasgow, and served with him for seven years.

Gardner had a Calvinist upbringing and was influenced by the work of Robert Owen, Welsh socialist and father of the cooperative movement. By adulthood he desired to create a cooperative in the United States that would incorporate socialist values. In 1850, Gardner and others purchased land near Monona, Iowa, for this purpose, but Gardner never lived there, choosing to return to Scotland to raise more money. He stayed there until 1856, becoming owner and editor of the Glasgow Sentinel in 1851.

While visiting The Great Exhibition in 1851 in Hyde Park, London, he saw the photography of American Mathew Brady, and thus began his interest in the subject. Upon his return to Glasgow, Gardner began to experiment with photography and started reviewing exhibitions of photographs in the newspaper. Early in 1852, he pulled out of active association with the paper and devoted his time to learning about the new art of photography.

In 1856, Gardner and his family moved to the United States. Learning that many friends and family members at the cooperative he had helped to form were dead or dying of tuberculosis, he stayed in New York. There he initiated contact with Brady and went to work for him, and over the course of time, became the manager for Brady's Washington, D.C., gallery.

Gardner had become an expert in the new collodion (wet-plate process) photographs that were rapidly replacing the daguerreotype, and he developed a reputation as an outstanding portrait photographer. Gardner invented the Imperial photograph, which was a large print measuring 17 by 21 inches. These were very popular, and Brady was able to sell them for between $50 and $750, depending on how much retouching was required.[2]

After Abraham Lincoln’s victory in the November 1860 presidential election there was a dramatic increase in the demand for Gardner’s work as soldiers preparing for war wanted to be photographed in uniform before going to the front line. 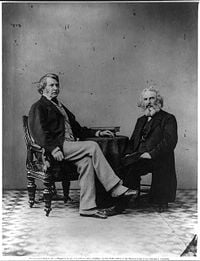 In July 1861, Brady, his assistant, a newspaper reporter, and Alfred Waud, a sketch artist working for Harper’s Weekly, witnessed Bull Run, the first major battle of the war. It was because of Gardner’s relationship with Allan Pinkerton, who was head of the intelligence operation that became known as the Secret Service, that Brady’s idea to photograph the war was presented to Lincoln. Pinkerton then recommended Gardner for the position of chief photographer under the jurisdiction of the U.S. Topographical Engineers. In November 1861, Gardner was appointed to the staff of General George McClellan, who at that time was the commander of the Army of the Potomac. With his appointment, Gardner’s management of Brady’s Washington, D.C., gallery ended. Gardner was granted the honorary rank of captain and photographed the battle of Antietam (September 1862), developing in his own traveling darkroom.[2] 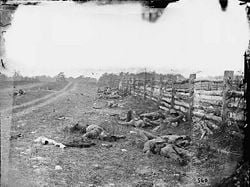 Photograph of the field at Antietam with Confederate dead by a fence on the Hagerstown road (1862).

When Lincoln dismissed Gen. McClellan from command of the Army of the Potomac in November 1862, Gardner’s role as chief army photographer diminished. It was around this time that Gardner ended his working relationship with Brady. Gardner had worked for the photographer Mathew Brady from 1856 to 1862. Gardner's work was usually attributed to Brady, and despite his considerable output, historians have tended to give Gardner less than full recognition for his documentation of the Civil War.[3]

During the winter of 1862 Gardner followed General Ambrose Burnside, photographing the Battle of Fredericksburg. Next, he followed General Joseph Hooker. In May 1863, Gardner and his brother James opened their own studio in Washington, D.C, hiring many of Brady's former staff. Gardner photographed the Battle of Gettysburg (July 1863) and the Siege of Petersburg (June 1864–April 1865) during this time.

Among his photographs of Abraham Lincoln were the last to be taken of the President, four days before his assassination. He also documented Lincoln's funeral, and photographed the conspirators involved (with John Wilkes Booth) in Lincoln's assassination. Gardner was the only photographer allowed at their execution by hanging, photographs of which would later be translated into woodcuts for publication in Harper's Weekly. 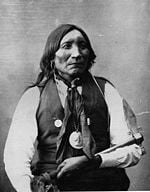 Gúipä'go (Lone Wolf), head chief of the Kiowa tribe photographed by Gardner in 1872.

He published a two-volume work: Gardner's Photographic Sketch Book of the Civil War in 1866. Each volume contained 50 hand-mounted original prints. Not all the photographs were Gardner's; after his experience with Brady he made sure to credit the negative producer and the positive print printer. As the employer, Gardner owned the work produced, like any modern day studio. The sketchbook contained work by Timothy H. O'Sullivan, James F. Gibson, John Reekie, William R. Pywell, James Gardner (his brother), John Wood, George N. Barnard, David Knox and David Woodbury among others.

Because of the high cost of his book it failed commercially, but in 1867, Gardner began his involvement with the Union Pacific Railway Expedition as chief photographer. In September of that year, Gardner traveled with his son and friend William Pywell to St. Louis to document the building of the railroad. He published these photos in Across the Continent on the Kansas Pacific Railroad in 1868.[4]

After 1871, Gardner gave up photography and helped to found an insurance company. Gardner spent his later years working in a philanthropic capacity. He copied a thousand daguerreotypes for the Metropolitan Police Department in Washington, D.C. He worked with the Masonic Mutual Relief Association, becoming its president in 1882, and helped found the Saint John’s Mite Association to help Washington’s poor. Early in December 1882, Gardner became ill and his condition deteriorated rapidly. He died on December 10, 1882 at the age of 61.[2]

In 1961 Frederic Ray, art director of the Civil War Times, noticed that two of the photographs, taken in different locations on the battlefield, appeared to show the same corpse. In one scene a Confederate soldier's corpse lay on the southern slope of Devil's Den. Gardner had captioned this photo A Sharpshooter's Last Sleep.

But in another scene the body had moved 40 yards to a rocky niche. Gardner captioned this photo The Home of a Rebel Sharpshooter. Apparently Gardner had moved the soldier's corpse to the rocky outcropping for the sake of creating a more dramatic image. He even turned the soldier's head to face the camera and leaned a gun against the rocks.

Although Gardner identified the soldier as a sharpshooter, the weapon beside him is not a sharpshooter's rifle. It was probably a prop, placed there by Gardner.[5]

This faked photographed has been well researched by William Frassanito in his book Gettysburg: A Journey in Time (1975).

His work remains in collections at the National Archives, the Library of Congress, the George Eastman House, and the New York Historical Society.

Cornell Library's seven-millionth volume was Gardner’s Photographic Sketch Book of the War, a gift of Thomas A. Mann and Diann Goodman Mann in 2002. The book is now housed in the Division of Rare and Manuscript Collections at Cornell University. It was added to Cornell's holdings of significant rare books, manuscripts, and photographs documenting the history of the abolitionist movement and the American Civil War.[6]

The Alexander Gardner Lincoln Glass Plate Negative, the original collodion wet-plate negative of the portrait of Abraham Lincoln made by Gardner, is the centerpiece of the Indiana Historical Society's Lincoln Collections. Lincoln sat for this photograph on November 8, 1863, just eleven days before delivering the Gettysburg Address. It is one of the best-known photographs of Lincoln and was used by sculptor Daniel Chester French as the model for the Lincoln Memorial in Washington, D.C. The collection includes a modern positive print of the image and the period envelope in which the glass plate negative was originally stored.[7]

Retrieved from https://www.newworldencyclopedia.org/p/index.php?title=Alexander_Gardner_(photographer)&oldid=1052650
Categories:
Hidden category:
This page was last edited on 15 May 2021, at 09:42.
Content is available under Creative Commons Attribution/Share-Alike License; additional terms may apply. See Terms of Use for details.