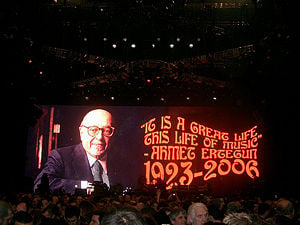 Ahmet Ertegün (July 31, 1923 – December 14, 2006) was a Turkish American who co-founded Atlantic Records and made a major contribution to the record industry. He also co-founded the New York Cosmos soccer team of the former North American Soccer League and was inducted into the Rock and Roll Hall of Fame in 1987.

Producing or co-producing most of the Atlantic records during this golden age of popular music, Ertegun also wrote songs for Atlantic artists under the pseudonym "Nugetre" (Ertegun spelled backwards). After selling the label to Time Warner in 1967, Ertegün continued to lead Atlantic for more than a decade as it expanded into the realms of soul and rock, featuring highly successful artists ranging from Aretha Franklin to Led Zeppelin.

Much loved in the music world, Ertegün was honored with several memorial concerts after his death in 2006. The main exhibition hall at the Rock and Roll Hall of Fame is named after him.

Born in Istanbul, Turkey, Ertegun and his family moved to Washington, D.C. in 1935 with their father Münir Ertegün, who was appointed the Turkish Ambassador to the United States in that year. Münir Ertegün raised Ahmet as a Muslim like, himself.

Ahmet's older brother Nesuhi introduced him to jazz music, taking him to see the Duke Ellington and Cab Calloway orchestras in London at the age of nine. At 14, Ahmet's mother bought him a record-cutting machine which he used to compose and to add lyrics to instrumental records. The brothers also frequented Milt Gabler’s Commodore Record Store, assembled a large collection of over 15,000 jazz and blues 78s, and became acquainted with musicians such as Ellington, Lena Horne, and Jelly Roll Morton. Ahmet and Nesuhi staged concerts by Lester Young, Sidney Bechet, and other jazz giants, often at the Jewish Community Center, which was the only place that would allow a mixed audience and mixed band. They also traveled to New Orleans and Harlem to listen to music and developed a keen awareness of developing musical tastes.

Also in 1944, Münir Ertegün died and was buried in Arlington National Cemetery. About two years later, President Truman ordered the battleship USS Missouri to return his body to his homeland as a demonstration of U.S. power opposing Russian pressure on Turkey.

Ahmet graduated from St. John's College in Annapolis in 1944. At the time of his father’s death, he was taking graduate courses in Medieval philosophy at Georgetown University. Ahmet and Nesuhi elected to live in the United States even though the rest of the family returned to Turkey. While Nesuhi moved to Los Angeles, Ahmet stayed in Washington and decided to get into the record business as a temporary measure to help put him through college, after which he would return to Turkey. 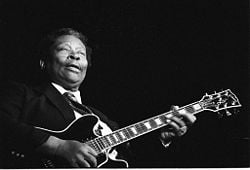 In 1949, after 22 unsuccessful record releases, Atlantic had its first hit with Stick McGhee's "Drinkin' Wine Spo-Dee-O-Dee." The company expanded through the 1950s. Jerry Wexler and later Nesuhi Ertegün joined as partners. It recruited or discovered artists such as Ruth Brown, Joe Turner, The Clovers, The Drifters, The Coasters, and Ray Charles.

The Ertegün brothers brought a jazz sensibility, as well as many jazz artists, into R&B, successfully combining blues and jazz styles from around the country. Atlantic challenged the primacy of the major labels of the time by discovering, developing, and nurturing new talent. Eventually, Atlantic became the premier rhythm-and-blues label and set new standards in producing high quality recordings. In 1957, Atlantic was among the first labels to record in stereo.

Ertegun himself wrote a number of classic blues songs, including "Chains of Love" and "Sweet Sixteen," under the pseudonym "A. Nugetre." The songs were given expression first by Big Joe Turner and later by B.B. King, whose version of "Sweet Sixteen" is considered a classic. "Nugetre" also wrote the early Ray Charles hit "Mess Around," with lyrics that drew heavily on Pinetop Smith. Ertegün was part of the shouting choral group on Turner's classic early rock song "Shake, Rattle, and Roll," along with Wexler and songwriter Jesse Stone.

In the 1960s, often in partnerships with local labels such as Stax Records in Memphis, Atlantic became instrumental in the growth of soul music, with artists such as Ben E. King, Solomon Burke, Otis Redding, Percy Sledge, Aretha Franklin, and Wilson Pickett. Ertegün helped popularize "blue-eyed soul" when he discovered the Rascals at a Westhampton nightclub in 1965 and signed them to Atlantic. They went on to chart 13 top 40 singles in four years. In the late 1960s, Ertegün heard Led Zeppelin's demo and knew they would be a smash hit after hearing the first few songs. He quickly signed them. He also convinced Crosby, Stills, and Nash to allow Neil Young to join them on one of their tours, thereby founding Crosby, Stills, Nash, and Young.

The Ertegün brothers and Wexler sold the Atlantic label to Warner Bros.-Seven Arts in 1967 for $17 million in stock. Ahmet Ertegün continued at Atlantic's helm, though less directly involved as a producer. He used his considerable personal skills in negotiations with major stars, such as when The Rolling Stones, who were shopping for a record company to distribute their independent Rolling Stones Records label. Ertegün personally conducted the negotiations with Mick Jagger, successfully completing the deal between The Rolling Stones and Atlantic, when other labels had offered the band more money.

In 1973, the Ertegün brothers took some of the money from the sale of Atlantic and co-founded the New York Cosmos soccer team of the North American Soccer League. They were instrumental in bringing in soccer legends like Pelé, Carlos Alberto, and Franz Beckenbauer to the club.

Aged 83, Ahmet Ertegün was injured after a fall at a Rolling Stones performance in New York on October 29, 2006 for the sixtieth birthday of former United States President Bill Clinton. Ertegün slipped and hit his head backstage. Although he was initially in stable condition, he soon took a turn for the worse and died.

He was buried December 18 in the Garden of Sufi Tekke, Özbekler Tekkesi in Sultantepe, Üsküdar, İstanbul, next to his brother, his father, and his great-grandfather Şeyh İbrahim Edhem Efendi. At the garden were hundreds of mourners, including his wife Mica, members of the Ertegün family, Turkish dignitaries and entertainers.

A more informal salute to Ertegün took place on July 31, 2007, the anniversary of his birth, at Grauman's Egyptian Theatre in Hollywood. Several of his friends shared anecdotes about their experiences with Ertegün and the assembled gathering then saw a special screening of the American Masters documentary Atlantic Records: The House That Ahmet Built. Among those who paid tribute to Ertegün in person were: Solomon Burke, Jerry Leiber and Mike Stoller, Keith Emerson, Peter Asher, and Spencer Davis.

Later than year, Led Zeppelin reunited for a tribute show to Ertegün at the O2 Arena in London on December 10, 2007. The band headlined a bill that also included Paolo Nutini, Mick Jones of Foreigner, and Bill Wyman's Rhythm Kings who backed those two acts as well as playing themselves. The show was held to raise money for the Ahmet Ertegün Education Fund, which pays for university scholarships in the United Kingdom, United States, and Turkey.

In 1987, Ertegün was inducted into the Rock & Roll Hall of Fame, of which he himself was a founder. In the late 1980s, with the support of Bonnie Raitt and others, he provided $1.5 million to help establish The Rhythm and Blues Foundation to award monies to underpaid blues artists. The foundation's establishment arose from a lengthy battle by Ruth Brown and other Atlantic artists to obtain unpaid past royalties from the company; other record companies later also contributed. Among early recipients of payments were John Lee Hooker, Bo Diddley, Johnny "Guitar" Watson, Brown herself, and the Staple Singers.

Ertegün received an honorary doctorate in music from the Berklee College of Music in Boston in 1991, and was awarded the Grammy Trustees Award for his lifetime achievements in 1993. At the tenth annual Rock and Roll Hall of Fame Induction Dinner in 1995, it was announced that the museum's main exhibition hall would be named after Ertegün.

The United States Library of Congress honored Ertegün as a Living Legend in 2000. With brother Nesuhi, he was inducted into the National Soccer Hall of Fame in 2003. In 2005, the National Academy of Recording Arts and Sciences presented Ahmet with the first "President's Merit Award Salute To Industry Icons." Ertegün was also a recipient of The International Center in New York's Award of Excellence.