In the mid 1950s, Leiber and Stoller created a string of ground-breaking, humorous hits for The Coasters, including "Young Blood," "Searchin'," "Charlie Brown," and "Yakety Yak." Earlier, they had written the blues song "Hound Dog" for Big Mama Thornton, which went on to become the signature hit for Elvis Presley in his early career, as well as "Kansas City," which became a major hit for Wilbert Harrison. Among their other iconic hits for Presley were "Loving You," "Don't," and "Jailhouse Rock."

As producers, Leiber and Stoller were the first to surround black R & B music with elaborate production values, enhancing its emotional power with The Drifters in such songs as "There Goes My Baby" and "On Broadway." The song "Stand By Me," co-written by Ben E. King, is considered a classic R & B ballad. The Clovers' "Love Potion #9 was another humorous hit in their earlier Coasters' vein.

Leiber and Stoller were also a major influence on producer Phil Spector, who worked with them on recordings of The Drifters and Ben E. King and went on to create the famous "Wall of Sound" as an independent producer. Leiber and Stoller later owned their own record company and, focusing on the "girl-group" sound, released classic hits such as "Leader of the Pack" by the Shangri-Las and "Chapel of Love" by the Dixie Cups. They also wrote the Peggy Lee hits "I'm a Woman" and "Is That All There Is?" (1969), the latter of which won her a Grammy Award for Best Female Pop Vocal Performance and was later named to the Grammy Hall of Fame.

Jerry Leiber originally came from Baltimore, Maryland, and Mike Stoller was from Long Island, New York. However, they met in Los Angeles in the 1950s, where Stoller was a freshman at Los Angeles City College, while Leiber was a senior at Fairfax High School. When not in school, Stoller played piano and Leiber worked in a record store. After they met, they found that they shared a love of blues and rhythm and blues.

In 1950, Jimmy Witherspoon recorded and performed the team's first commercial song, "Real Ugly Woman." Their first hit composition was "Hard Times," recorded by Charles Brown, which was a rhythm and blues hit in 1952. "Kansas City," recorded in 1952 (as "KC Loving") by Little Willie Littlefield, would become a number-one hit in 1959 for Wilbert Harrison. In 1952, they wrote "Hound Dog" for Big Mama Thornton, which became a hit for her in 1953. It also became a world-famous hit for Elvis Presley in 1956, although in a bowdlerized version. Their later songs often had lyrics more appropriate for pop music, and their combination of rhythm and blues styles with pop lyrics revolutionized rock and roll.

The duo formed Spark Records in 1953. Their hits during this time included "Smokey Joe's Cafe," "Riot in Cell Block #9," both for the The Coasters. The label was later bought by Atlantic Records, which hired Leiber and Stoller as independent producers.

"Black Denim Trousers and Motorcycle Boots" was a popular Lieber and Stoller song that became a hit for The Cheers in the fall of 1955. It went to number six on the Billboard Hot 100 singles charts. Soon after, the song was recorded by Edith Piaf in a French translation titled "L'homme A La Moto." 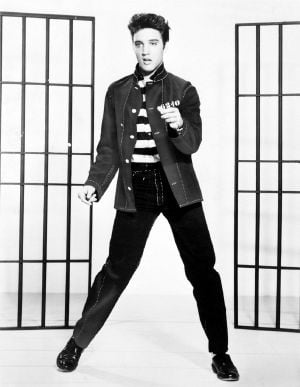 Elvis Presley's version of Leiber and Stoller's "Jailhouse Rock" held the number one spot for seven weeks in the fall of 1957.

At Atlantic, Leiber and Stoller revitalized the career of the The Drifters and continued to turn out hits for The Coasters. Their songs from this period include "Charlie Brown," "Searchin'," "Yakety Yak," "Stand By Me," and "On Broadway," among numerous other hits. For The Coasters alone, they wrote 24 songs that appeared in the national charts.

In the mid-50s, the team signed to produce records for RCA Victor in an innovative deal that allowed them to produce for other labels. This, in effect, made them the first independent record-producers. In 1956, Stoller survived the sinking of the SS ''Andrea Doria''. After his rescue, Leiber greeted him at the dock with the news that "Hound Dog" had become a hit for Elvis. His reply was reportedly "Elvis who?" The song went on to become Presley's signature song in his early years.

Presley's version of "Hound Dog" was a near exact copy of a version by Freddie Bell and the Bellboys that was recorded in early 1955. The melody and much of the lyrics of the song as originally sung by Big Mama Thornton were substantially changed in this version, by parties unknown. However, the Bell/Presley version of the song owes much to that of Leiber and Stoller. Presley went on to record several dozen Leiber-Stoller songs, many written specifically for him, including "Jailhouse Rock," "Don't," "Treat Me Nice," and "You’re So Square."

"Ruby Baby" was originally recorded by The Drifters and was a major R & B hit for them in 1956. It later became a number two Billboard Hot 100 hit when Dion released his remake as a single in 1962.

In the early 1960s, Phil Spector served an apprenticeship of sorts under Leiber and Stoller in New York City, developing his record producer's craft while assisting and playing guitar on their sessions, including "On Broadway" for The Drifters. Leiber and Stoller also produced a remarkable series of records for United Artists' record division, including influential hits by Jay and the Americans ("She Cried"), The Exciters ("Tell Him"), and The Clovers ("Love Potion #9"). New York's Brill Building, where Leiber and Stoller produced many of rock and roll's classic hits, along with other songwriting teams such as Gerry Goffin and Carole King, Burt Bacharach and Hal David, and Neil Sedaka and Howard Greenfiel.

In 1964, Leiber and Stoller founded and briefly owned Red Bird Records, which focused on popular "girl groups" and issued such number-one hits as the Shangri-Las' "Leader of the Pack" and the Dixie Cups' "Chapel of Love." Of the label's first 30 singles released, 11 reached the Top 40. After selling Red Bird, the team worked as independent producers and continued to write songs. Their best known song from this period is "Is That All There Is?" recorded by Peggy Lee in 1969, which would go on to win a Grammy Award. Their last major hit production was "Stuck In the Middle With You" by Stealers Wheel in 1972. In 1975, they recorded an album of art songs with Peggy Lee, entitled Mirrors. A remixed and expanded version of this album was released in 2005 as Peggy Lee Sings Leiber & Stoller.

Mezzo-soprano Joan Morris and her pianist-composer husband William Bolcom have recorded an album of "other songs by Leiber and Stoller," featuring a number of their more unusual (and satiric) works (including "Let's Bring Back World War I," written specifically for them, and "Humphrey Bogart," a tongue-in-cheek song about obsession with the actor).

Leiber and Stoller's catalog of classic rock and roll and R & B hits is unmatched by any other individual or songwriting team. Their, meticulous craft and the high level of creativity which they brought to rock-and-roll songwriting was a major influence on the rock songwriters of the 1960s, from Gerry Goffin and Carole King to the great writers of the Motown era. John Lennon and Paul McCartney also both paid tribute to the great influence Leiber and Stoller's songs had on the development of their own craft.

Leiber and Stoller were inducted into the Songwriters Hall of Fame in 1985 and Rock and Roll Hall of Fame in 1987. In 1991, Leiber and Stoller were honored with the ASCAP Founders' Award. They won Grammy awards for "Is That All There Is?" and for the cast album of Smokey Joe's Cafe, a 1995 Broadway musical based on their work. The musical revue was also nominated for seven Tony awards. Leiber and Stoller also have a star on the Hollywood Walk of Fame. In early 1988, the Elvis Presley version of "Hound Dog" entered the Grammy Hall of Fame. In 2000, the British Academy of Songwriters presented them the Ivor Novella Award.