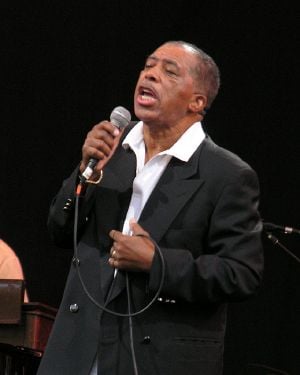 Ben E. King was The Drifters' best known lead singer, with hits including "There Goes My Baby," "This Magic Moment," and "Save the Last Dance for Me."

The Drifters are a long-lived American doo wop/R&B band, who helped create soul music with gospel-style vocals. The Drifters began in 1953 at the instigation of record producer Ahmet Ertegun and singer Clyde McPhatter. The early Drifters had several R & B hits. McPhatter left the group in 1954 when he was drafted and a number of contentious personnel changes soon followed.

The group was inducted into the Rock and Roll Hall of Fame in 1988. Due to disputes over the rights to the name, today there are several groups who perform under the name, "The Drifters." 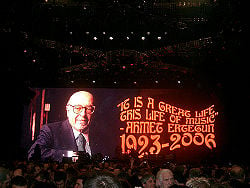 Atlantic Record impresario Ahmet Ertegun was instrumental in the formation of the Drifters.

In May 1953, Ahmet Ertegun of Atlantic Records approached Clyde McPhatter after he left the Dominoes and signed him to the fledgling R & B and jazz label to form a new group. McPhatter first recruited several members of his earlier group, the Mount Lebanon Singers, but later settled on Gerhart and Andrew Thrasher on baritone and second tenor, respectively, Bill Pinkney on high tenor, Willie Ferbee as bass, and Walter Adams on guitar. This is the group which produced the group's first hit: "Money Honey." The Drifters had several additional successes before McPhatter was drafted in May 1954, after which he pursued a solo career. He sold his share of the group to George Treadwell a former jazz trumpeter and husband of legendary singer Sarah Vaughan, who served as the group's manager.

McPhatter was first replaced by David Baughn, who had been on the group's first recording session. While his voice was similar to McPhatter's, his erratic behavior made him unsuitable in the eyes of Atlantic Records' executives. Baughn soon left the group and was replaced by Cleveland native Johnny Moore (of The Hornets). This line-up had a major R & B hit in 1955 with "Adorable," followed by several others ("Ruby Baby," "I Got To Get Myself A Woman," and "Fools Fall In Love").

In the mid 1950s, The Drifters began working with legendary songwriters Jerry Leiber and Mike Stoller, who eventually became the group's producers as well. Their 1956 hit "I Gotta Get Myself a Woman" marked the beginning of what many consider the group's golden age. However, low salaries and other disputes plagued The Drifters.

Johnny Moore was drafted in November 1957 and replaced by Bobby Hendricks, who had briefly been with The Swallows. However, the group was still not able to break into mainstream markets.

Manager George Treadwell eventually fired the entire Drifters' singing personnel and hired most of the group previously known as The Five Crowns, including lead singer Ben E. King, promoting them under the name of The Drifters. This is the group whose sound is now generally associated with the name.

Songwriter Carole King penned Drifters' hit "Up on the Roof."

This new line-up released several singles which became major chart hits. "There Goes My Baby," was the first commercial rock-and-roll recording to include a string orchestra. "This Magic Moment," "Save The Last Dance For Me," and "I Count The Tears" soon followed.

However, personnel changes started almost immediately. Lover Patterson, who had managed the Five Crowns and was now the Drifters' road manager, did not get along with Treadwell. Since Patterson had Ben E. King under personal contract, he refused to let King tour with the group. New member Johnny Lee Williams thus did the touring. However, King continued to record with The Drifters for about a year before beginning a successful solo career. His voice was so associated with the group by this time that Ben E. King's solo hits, such as "Stand By Me" and "Rose in Spanish Harlem," are often thought to be songs by The Drifters.

Williams was subsequently replaced by Rudy Lewis of The Clara Ward Singers gospel group. It is Lewis who took the lead on such hits as "Some Kind Of Wonderful," "Please Stay," and "Up On The Roof."

Johnny Moore returned in 1964, after his military service and a failed solo career, making the group a quintet consisting of Moore, Charlie Thomas, Rudy Lewis, Gene Pearson, and Johnny Terry. Lewis died the night before before the group was scheduled to record "Under the Boardwalk," and Johnny Moore took over as the lead singer on that session, which produced the group's last major hit.

By March 1970, following a number of additional line-up changes, The Drifters had broken up. In January 1971 Johnny Moore produced a session which was subsequently sold to Atlantic, resulting in "A Rose By Any Other Name" and "Be My Lady," the Drifters' last Atlantic releases.

The Drifters eventually reappeared in England and underwent many additional bewildering personnel changes. Throughout the 1970s, the only charted records for the group were disco songs on the British charts. In 1999 the group's longest serving member, Johnny Moore, died. In December 2006, writs were served in the London High Court by Tina Treadwell, daughter of George, over the rightful control of The Drifters' name and products.