From New World Encyclopedia
Jump to:navigation, search
Previous (The Crusades)
Next (The Drifters)

The first British national newspaper to develop an online version, The Daily Telegraph remains the highest selling "quality" daily newspaper in Britain. Thus, despite changes in the newspaper industry due to innovations in technology, The Daily Telegraph' has continued to be successful, and determined to maintain its place offering one of the several options available to the British public to receive timely and relevant information about newsworthy events. 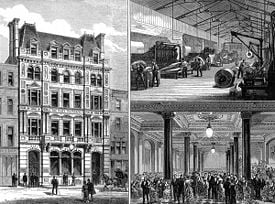 In 1882 the Daily Telegraph moved to new Fleet Street premises, which were pictured in the Illustrated London News.

The Daily Telegraph was established on June 29, 1855, by Colonel Arthur B. Sleigh. He controlled it only briefly before selling it to his printer, Joseph Moses Levy, father of the 1st Baron Burnham. Levy appointed his sons as editors and relaunched the paper on September 17. His most significant and successful move was reducing the price of the paper to a penny, the first of the "penny press." Within twelve months the new paper was outselling The Times.

In 1908, Kaiser Wilhelm II of Germany gave a controversial interview[1] to The Daily Telegraph which severely damaged Anglo-German relations and added to international tension leading to World War I.

In 1928, the son of the 1st Baron Burnham sold the paper to the 1st Viscount Camrose, in partnership with his brother Viscount Kemsley and the 1st Baron Iliffe. Both the Camrose (Berry) and Burnham (Levy-Lawson) families remained involved in management until Conrad Black took control in 1986.

The Daily Telegraph reached new heights of readership under the guidance of Michael Berry, Lord Hartwell, who began editing the paper in 1954 after the death of his father. Berry introduced the popular column "The Way of the World," started The Sunday Telegraph, and was one of the first to add color magazine supplements. Lord Hartwell is credited with instilling a strong sense of journalistic integrity in the Daily Telegraph. He retired in 1987.

The Daily Telegraph's sister Sunday paper, The Sunday Telegraph, was founded in 1961. The conservative polemicist Sir Peregrine Worsthorne is probably the best known journalist associated with the title (1961-1997), eventually being editor for three years from 1986. In 1989, the Sunday title was briefly merged into a seven-day operation under Max Hastings' overall control.

The Telegraph is traditionally seen as being on the right of the political spectrum.[2] According to a survey conducted in 2004, 61 percent of Telegraph readers were Conservative Party supporters compared with 31 percent of the general population.[3]

The combination of personal links between the paper's editorial team and the leadership of the Conservative Party, along with the paper's influence over Conservative activists, has resulted in the paper often being jokingly referred to as the Torygraph.

After taking over ownership in 2004, Sir David Barclay suggested that The Daily Telegraph might in the future no longer be the "house newspaper" of the Conservative Party. In an interview with The Guardian he said, "Where the government are right we will support them." The editorial board continued to endorse the Conservatives in the 2005 general election.

The Daily Telegraph continues to be the highest selling British "national quality" newspaper, with an average circulation of 901,238. This is compared with a circulation of 653,780 for The Times, 432,980 for the Financial Times, 253,737 for The Independent, and 382,393 for The Guardian as of November 2006.[4] These figures do not take into account the varying numbers of free copies of each paper given away at hotels, railway stations, and in airplanes.

Until January 2004 the newspaper group was controlled by Canadian businessman, Conrad Black. Black, through his holding company Ravelston Corporation, owned Hollinger Inc. which in turn owned 30 percent of Hollinger International and, under a deal struck by Andrew Knight through which Black bought the newspaper group in 1986 following Lord Hartwell's retirement, owned 78 percent of the voting rights. Hollinger Inc. also owned the Chicago Sun-Times, the Jerusalem Post, and other right-leaning publications such as The Spectator. In June 2004, The Daily Telegraph was bought by the Barclay brothers, Sir David and Sir Frederick Barclay.

On January 18, 2004, Black was fired as chairman of the Hollinger International board over allegations of financial wrongdoing. Black was also sued by the company. Later, it was reported that the Barclay brothers, Sir David and Sir Frederick, had agreed to purchase Hollinger Inc. from Black, giving them the controlling interest in the newspaper group. They then launched a takeover bid for the rest of the group, valuing the company at £200 million. However, a suit was filed by the Hollinger International board with the U.S. Securities and Exchange Commission to try to block Black from selling shares in the company until an investigation into his dealings could be completed. Black filed a counter-suit but eventually United States judge Leo Strine sided with the Hollinger International board and blocked Black from selling his Hollinger Inc. shares and interests to the Barclay brothers. On March 7, 2004, the twins announced they were launching another takeover bid, this time just for the Daily Telegraph and its Sunday sister paper. Owner of the Daily Express, Richard Desmond, was also interested in purchasing the paper, selling his interest in several pornographic magazines to finance the initiative. Desmond withdrew in March 2004 when the price climbed above £600 million.

Eventually, the Barclay brothers purchased Hollinger, and with it the Telegraph, for around £665 million in late June 2004.[5]

November 15, 2004, saw the tenth anniversary of the launch of the Telegraph's website Electronic Telegraph. Now rebranded to telegraph.co.uk the website was the UK's first national online newspaper. The online version has won several awards, including 'Most Innovative Technology of the Year' in the 2004 Newspaper Awards commended.[6] In 2006, the Telegraph moved from Canada Place in Canary Wharf, to Victoria Plaza, near Victoria Station in central London.[7]

There has been much speculation about the launch of a compact edition of The Daily Telegraph to counter the change in size of The Times to a tabloid. However, the Telegraph denied these claims and tried to attract disgruntled Times readers who want to read a more upmarket broadsheet. One of its advertising slogans was "Impact, Not Compact."

The Telegraph is nonetheless noted for the humor and quality of writing of many of its obituaries.

On Wednesday, the 24th of February, 1988, the Daily Telegraph was printed with the wrong date: “Thursday 25 February” was printed by mistake. This caused complaints from confused readers, but also inspired the first front page cartoon by Matt Pritchett with the caption: "I hope I have a better Thursday than I did yesterday."

Retrieved from https://www.newworldencyclopedia.org/p/index.php?title=The_Daily_Telegraph&oldid=1031318
Categories:
This page was last edited on 24 January 2020, at 20:35.
Content is available under Creative Commons Attribution/Share-Alike License; additional terms may apply. See Terms of Use for details.