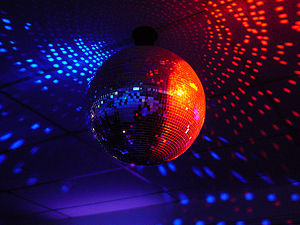 Disco is a genre of dance-oriented music popular from the mid-1970s through the early '80s. Musical influences on disco include Motown, funk, soul music, mambo, and salsa. Strings, horns, electric pianos, and electric guitars created a lush background sound from the music, with orchestral instruments such as the flute often used for solo melodies. Unlike in rock, a lead guitar is rarely used.

While performers and singers garnered the lion's share of public attention, the behind-the-scenes producers played an equal, if not more important role in disco's development, creating the innovative sounds and production techniques that were a key part of the "disco sound." Films such as Saturday Night Fever contributed to disco's rise in mainstream popularity.

A lively club culture developed around disco, characterized by youth-oriented fashion, strobe-lighted dance floors, and often drugs and promiscuous sex. Disco's popularity began to fade in the 1980s but has experienced a revival in recent years.

Disco was also important in the development of Hip-Hop music, as well as disco's direct descendants: the 1980s and 1990s genres of house music and its harder-driving offshoot, techno.

Role of producers and DJs

Disco has its musical roots in late 1960s' northern soul music, especially the Philly and New York soul, both of which were evolutions of Detroit's Motown sound. The Philly Sound is typified by lavish percussion. Music with proto-"disco" elements appeared in the late 1960s and with "Tighten Up" and "Mony, Mony," "Dance to the Music," and "Love Child." Two early songs with disco elements include Jerry Butler’s 1969 "Only the Strong Survive" and Manu Dibango's 1972 "Soul Makossa." A number of Motown hits also resembled the disco style and were later covered by disco artists. The term disco was first used in print in an article by Vince Aletti in the September 13, 1973, edition of Rolling Stone magazine titled "Discotheque Rock '72: Paaaaarty!"

The disco sound was also shaped by the producer Tom Moulton, who wanted to extend the enjoyment of the music and thus created the "Remix," which has influenced many other latter genres such as Rap, Hip-Hop, Techno and others. DJs and remixers would often re-edit existing songs using reel-to-reel tape machines. Their remixed versions would add in percussion breaks, new sections, and new sounds. Influential DJs and remixers who helped to establish what became known as the "disco sound" included Moulton, David Mancuso, Nicky Siano, Shep Pettibone, Larry Levan, Walter Gibbons, and later Frankie Knuckles.

Disco was also shaped by nightclub DJs such as Francis Grasso, who used multiple record players to seamlessly mix tracks from genres such as soul, funk, and pop music at discotheques, creating the forerunner to later styles such as hip-hop and house.

The Hues Corporation's 1974 "Rock The Boat," a U.S. number-one single and million-seller, was one of the early disco songs to top the charts. Others included "Walking in Rhythm" by The Blackbyrds, "Rock Your Baby" by George McCrae, and "Love's Theme" by Barry White's Love Unlimited Orchestra. Also in 1975, Gloria Gaynor released the first side-long disco mix vinyl album, which included a remake of The Jackson 5's "Never Can Say Goodbye" and two other songs, "Honey Bee" and "Reach Out (I'll Be There)." Also significant during this early disco period was Miami's KC and the Sunshine Band. Formed by Harry Wayne Casey ("KC") and Richard Finch, KC and the Sunshine Band had a string of disco-definitive, top-five hits between 1975-1976, including "Get Down Tonight," "That's the Way (I Like It)," "(Shake, Shake, Shake) Shake Your Booty," and "I'm Your Boogie Man." 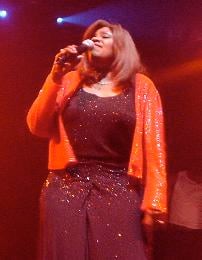 Disco hit the airwaves with Marty Angelo's Disco Step-by-Step Television Show in 1975, followed by Steve Marcus' Disco Magic/Disco 77, David Bergman's Soap Factory (1978), and Merv Griffin's, Dance Fever (1979), hosted by Deney Terrio, who is credited with teaching actor John Travolta to dance for his role in Saturday Night Fever. Several parodies of the disco style were created, most notably "Disco Duck" recorded by Rick Dees, at the time a radio Disc Jockey in Memphis, Tennessee. The Rolling Stones, tongues firmly in cheeks, released a long playing (8:26) disco version of the song "Miss You" to accompany their 1978 album Some Girls. Frank Zappa famously parodied the lifestyles of disco dancers in "Dancin' Fool" on his 1979 Sheik Yerbouti album.

The "disco sound," while unique, defies a simple description, since it was an ultra-inclusive art form that drew on as many influences. Generally it tended to emphasize instrumental music over vocals and its rhythm was driving and upbeat, thus very dance-oriented. Vocals could be frivolous or serious love songs, even socially conscious commentary. The music tended to be layered and soaring, with reverberated vocals often doubled by horns over a background "pad" of electric pianos, rhythm guitars, and a variety of other instruments, both orchestral and electric.

Synthesizers were fairly common in disco, especially in the late 1970s. The rhythm was usually laid down by prominent, syncopated bass lines and by drummers using a drum kit, African/Latin percussion, and electronic drums, such as Simmons and Roland drum modules. The sound was enriched with solo lines and harmony parts played by a variety of orchestral instruments, such as harp, violin, viola, cello, trumpet, saxophone, trombone, clarinet, flugelhorn, French horn, tuba, English horn, oboe, flute, and piccolo.

By the late 1970s, many major U.S. cities had thriving disco club scenes that were centered around discotheques, nightclubs, and private loft parties where DJs would play disco hits through powerful PA systems for the dancers. Some of the most prestigious clubs had elaborate lighting systems that throbbed to the beat of the music. 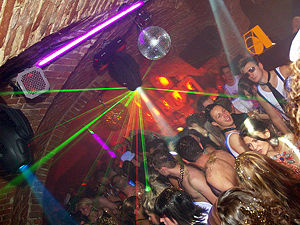 The decadent culture at Studio 54 got its start in disco's heyday.

Some cities had disco-dance instructors or dance schools that taught people how to do popular disco dances such as "Touch Dancing," and "the Hustle." There were also disco fashions that dancers wore for nights out at their local disco, such as sheer, flowing Halston dresses for women and shiny polyester Qiana shirts with pointy collars for men, preferably open at the chest, often worn with double-knit suit jackets.

For many dancers, the primary influence of the 1970s disco age is still predominantly the film Saturday Night Fever. In the 1980s this developed into the music-and-dance style of such films as Fame, Flashdance, and the musical Chorus Line.

In addition to the dance and fashion aspects of the disco club scene, there was also a thriving drug subculture, particularly for drugs that would enhance the experience of dancing to the loud music and the flashing lights, such as cocaine. Famous disco bars included the very important Paradise Garage as well as cocaine-filled celeb hangouts such as Manhattan's Studio 54, which was operated by Steve Rubell and Ian Schrager. Studio 54 was notorious for the hedonism that went on within; the balconies were known for sexual encounters, and drug use was rampant. Its dance floor was decorated with an image of the "Man in the Moon" that included an animated cocaine spoon.

Some historians have referred to July 12, 1979, as the "day disco died" because of an anti-disco demonstration that was held in Chicago. Rock-station DJs Steve Dahl and Garry Meier, along with Michael Veeck, son of Chicago White Sox owner Bill Veeck, staged Disco Demolition Night, a promotional event with an anti-disco theme between games at a White Sox doubleheader for disgruntled rock fans.

From "disco" to "dance sound"

The transition from the late 1970s disco styles to the early 1980s dance styles was marked primarily by the change from complex arrangements performed by large ensembles of studio-session musicians to a leaner sound, in which one or two singers would perform to the accompaniment of synthesizer keyboards and drum machines.

In addition, dance music during the 1981-83 period borrowed elements from blues and jazz, creating a style the diverged from the disco of the 1970s. This emerging music was still known as disco for a short time. Examples of early 1980s dance sound performers include D. Train, Kashif, and Patrice Rushen.

Faster tempos and synthesized effects, accompanied by guitar and simplified backgrounds, moved dance music toward the funk and pop genres.