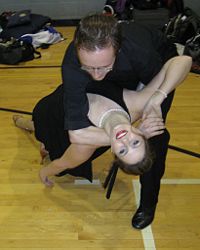 Mambo can be danced simply or with highly stylized moves such as the "dip" pictured here.

Mambo is a Cuban musical form and dance style. The word mambo ("conversation with the gods") is the name of a priestess in Haitian Voodoo, derived from the language of the African slaves who were imported into the Caribbean. The mambo is a musical and dance vehicle which contained the culture, religion, and identity of a people and lived through different regions and times to still unite individuals through harmony and understanding across all boundaries.

The fusion of swing and Cuban music produced this fascinating rhythm and in turn created a new sensational dance. The mambo could not have been conceived earlier since up to that time, Cuban and American jazz forms were still not wedded. The mambo is attributed to Perez Prado who introduced it at La Tropicana nightclub in Havana in 1943. Since then, other Latin-American band leaders such as Tito Rodriquez, Pupi Campo, Tito Puente, Machito, and Xavier Cugat have achieved styles of their own and furthered the mambo craze.

The mambo first appeared in the United States in New York's Park Plaza Ballroom—a favorite hangout of enthusiastic dancers from Harlem. The spirited dance gained its excitement in 1947 at the Palladium and other renowned places, such as The China Doll, Havana Madrid, and Birdland.

The mambo craze did not last long, and today the mambo is much limited to advanced dancers. Teachers agree that this is one of the most difficult of dances. Two of the greatest contributions of the mambo is that it led to the development of the cha-cha, and as an authentic nightclub style of mambo dancing, increasingly known in the 1990s known as the salsa.

Today, the mambo is enjoying a renewed popularity due to a number of films featuring the dance as well as a man named Eddie Torres, a New York dance pro known as the "Mambo King of Latin Dance." Steadily building a reputation as a dancer, instructor, and choreographer, Torres has become the leading exponent of the style.

In the back country of Haiti, the mambo is a voodoo priestess, who serves the villagers as counselor, healer, exorcist, soothsayer, spiritual advisor, and organizer of public entertainment. Mambo is the term for a female (as opposed to the Houngan, or male) priest. They are the highest form of clergy in the religion, whose responsibility it is to preserve the rituals and songs and maintain the relationship between the spirits and the community as a whole.

However, there is not a folk dance in Haiti called the "mambo." The mambo dance originated in Cuba where there were substantial settlements of Haitians.

The history of modern mambo begins in 1938, when a song called "Mambo" was written by Orestes and Cachao López. The song was a danzón, descended from European social dances like the English country dance, French contredanse, and Spanish contradanza, but it used rhythms derived from African folk music. The contradanza had arrived in Cuba in the eighteenth century, where it became known as danza and grew very popular. The arrival of black Haitians later that century changed the face of the danzon, adding a syncopation called cinquillo (which is also found in another contradanza-derivative, Argentine tango). 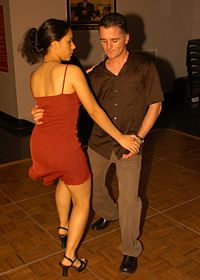 By the end of the nineteenth century, contradanza had grown lively and energetic, unlike its European counterpart, and was then known as danzón. The 1877 song "Las alturas de Simpson" was one of many tunes that created a wave of popularity for danzón. One part of the danzón was a coda which became improvised overtime. The bands then were brass (orquestra tipica), but was followed by smaller groups called charangas.

The most influential charanga was that of Antonio Arcano, who flourished in the late 1930s. It was Arcano's cellist, Orestes Lopez, whose "Mambo" was the first modern song of the genre. His brother, bassist and composer Cachao López, is often described as "the inventor of the mambo."

In the late 1940s, a musician named Perez Prado came up with the mambo dance and became the first person to market his music as "mambo." After leaving Havana, Prado moved his music to Mexico, and then New York City. Along the way, his style became increasingly homogenized in order to appeal to mainstream American listeners.

Following in the footsteps of Prado came a wave of mambo musicians, such as Enrique Jorrin. Some experimented with new techniques, such as faster beats and the use of side steps in the dance; this latter innovation formed the foundation of chachachá, and was the result of Jorrin's experimentation. Chachachá was very pop-oriented, especially after Arthur Murray further simplified the dance, which was taught in his nationwide chain of dance studios.

By the mid-1950s, mambo mania had reached fever pitch. In New York, the mambo was played in a high-strung, sophisticated way that had the Palladium Ballroom, the famous Broadway dance-hall, jumping. The Ballroom soon proclaimed itself the "temple of mambo," for the city's best dancers—the Mambo Aces, "Killer Joe" Piro, Augie and Margo Rodriguez, Paulito and Lilon, Louie Maquina, and Cuban Pete—gave mambo demonstrations there and made a reputation for their expressive use of arms, legs, head, and hands. Augie and Margo became the highest paid dance duo in the world and were still dancing professionally in Las Vegas 50 years later.

Mambo remained popular throughout the United States and Cuba until the 1960s, when a combination of boogaloo and pachanga (both modified forms of mambo) were created and supplanted the traditional mambo.

There was fierce rivalry between bands. The bands of Machito, Tito Puente, Tito Rodriguez, and Jose Curbelo delighted habitués such as Duke Ellington, Bob Hope, Marlon Brando, Lena Horne, and Afro-Cuban jazz pioneer Dizzy Gillespie. The shows were popular with Afro-Americans, Puerto Ricans, Cubans, Upper East-Side WASPs, and Jews and Italians from Brooklyn. Class and color melted away in the incandescent rhythm of the music. Even jazz musicians such as Erroll Garner, Charlie Parker, Sonny Rollins, and Sonny Stitt fell under the mambo's charm, as can be heard on the many Latin recordings they made in the 1950s.

In 1954, the cha-cha-cha, a kind of mambo created by the Cuban violinist Enriqué Jorrin, a member of the Orquesta America Charanga, swept through Havana and New York. Easier to dance than the mambo, with a squarish beat and a characteristic hiccup on the third beat, it spread to Europe, before being dethroned in the early 1960s by the pachanga and then the boogaloo.

Mambo returned to prominence in the 1995 when Guinness Brewery used Perez Prado's track Guaglione in an advertising campaign featuring the dancing of Dublin actor Joe McKinney. The song was released as a single and reached number two in the UK charts. In 1999, Lou Bega released a cover version of Mambo No. 5, another Prado original, which became a hit across Europe and the United States.

Impact of the mambo

The mambo originated from Africa and Europe and is practiced very often in the Caribbean where this music and dance have become a specialty of the arts of the islands. The mambo has become an ethnomusicological tool in preserving the ancient rituals and music of the Bantu and the English, French and Spanish courtly music. Through this acculturation, the mambo helped in the absorption of individuals into a new world because of the displacements of slavery and economic changes, i.e. planters and slaves who fled to Cuba after Haiti's independence.

Today, in Afro-Caribbean music, mambo is the section of an arrangement in danzon and related styles which feature instrumental improvisation. The beginning of the evolution of this section is attributed to the work of Machito and his Afro-Cubans, who included material, new to Afro-Caribbean music, for brass and saxophones, borrowed from the big band. Israel "Cachao" López added an open vamp to danzon and called it "nuevo ritmo" ("new rhythm"), which was later called the "mambo section."