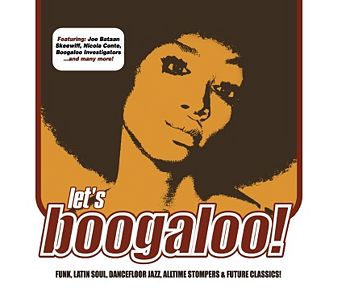 Boogaloo (shing-a-ling, popcorn music) is a musical genre of Latin music and dance that was very popular in the United States in the late 1960s. Boogaloo originated in New York City among teenage Cubans and Puerto Ricans. The style was a fusion of popular styles such as R&B, rock and roll and soul music with mambo and 'son montuno'. Boogaloo entered the mainstream through the American Bandstand television program.

The boogaloo dance was loose and interpretive in style. Early Boogaloo used a twelve-step sequence that was later sped up into a thirty-step sequence. The most common musical feature was a mid-tempo, looping melody that doubled as the anchoring rhythm, often played on piano or by the horn section. The presence of vocals, especially a catchy, anthematic chorus, was another distinguishing feature, especially in comparison to other instrumental dances like the mambo, guajira and guaracha. The Latin boogaloo (also spelled "bugalu") is distinguished from the funk-oriented dance style by the same name, which is generally known as the 'electric boogaloo'.

In the 1950s and 1960s, many Americans in the United States listened to a number of styles of music, including 'jump blues', R&B and doo wop. Puerto Ricans in New York City shared in these tastes, but also listened to genres like mambo or chachacha. There was much intermixing of Latinos, especially Puerto Ricans and Cubans, and African Americans—clubs that catered to both groups tried to find a musical common ground to attract both. Boogaloo was the result of this search, a marriage of many styles including Cuban 'son montuno' and 'guajira', Puerto Rican/Cuban 'guaracha', mambo and most uniquely, American R&B/soul. Boogaloo can be seen as "the first Nuyorican music" (René López), and has been called "the greatest potential that (Latinos) had to really cross over in terms of music" (Izzy Sanabria). Styles like doo wop also left a sizable infuence, through Tony Pabón (of Pete Rodríguez Band), Bobby Marín, King Nando, Johnny Colón and his vocalists Tony Rojas and Tito Ramos. Puerto Ricans (Herman Santiago and Joe Negroni) played a foundational role in the major doo wop group, Frankie Lymon & the Teenagers. Herman Santiago was the author of the groups Number One hit single "Why Do Fools Fall In Love."

Though boogaloo did not become mainstream nationwide until later in the decade, two early Top 20 hits came in 1963—Mongo Santamaria's performance of the Herbie Hancock piece "Watermelon Man" and Ray Barretto's "El Watusi." Inspired by these two successes, a number of bands began imitating their infectious rhythms (which were Latinized R&B), intense conga rhythms and clever novelty lyrics. Some long-time veteran Latin musicians played an occasional boogaloo number, including Perez Prado and Tito Puente, but most of the performers were teenagers like The Latin Souls, The Lat-Teens, Pucho & His Latin Soul Brothers, and Joe Bataan and The Latinaires. The older generation of Latin musicians have even been accused of initially using their influence to repress this youth-oriented movement. The term boogaloo was probably coined in about 1966 by Richie Ray and Bobby Cruz. The biggest boogaloo hit of the 60s was "Bang Bang" by the Joe Cuba Sextet, which achieved unprecedented success for Latin music in the United States in 1966 when it sold over one million copies. Other hits included Johnny Colón’s "Boogaloo Blues," Pete Rodríguez’s "I Like It Like That," and Hector Rivera’s "At the Party." Boogaloo also spread to Puerto Rico, where top band El Gran Combo released some material. Though the dance craze was over by the turn of the decade, boogaloo was popular enough that almost every major and minor Latin dance artist of the time recorded at least a few boogaloos on their albums.

In 1966, the same year of Joe Cuba's pop success, there was the closing of New York City's Palladium Ballroom, a well-known venue that had been the home of big band mambo for many years. The closing marked the end of mainstream mambo, and boogaloo ruled the Latin charts for about two years before salsa music began to take over.

Boogaloo remains extremely popular to this day in Cali, Colombia, where the genre is played extensively, along with salsa and pachanga, in various FM and AM radio stations and hundreds of dance clubs. The Caleños prefer their boogaloo sped up, from 33 to 45 RPM, to match the city's fast dance style.

Retrieved from https://www.newworldencyclopedia.org/p/index.php?title=Boogaloo&oldid=1064544
Categories:
Hidden category:
This page was last edited on 8 February 2022, at 21:48.
Content is available under Creative Commons Attribution/Share-Alike License; additional terms may apply. See Terms of Use for details.