Solomon Burke (born James Solomon McDonald, March 21, 1940 – October 10, 2010) was an American rhythm and blues performer and songwriter who, despite only moderate success as a recording artist, has had a major impact on the music business. A Grammy Award-winning singer/songwriter, Burke drew from gospel, soul, and blues to create a unique R&B style when the genre was still in its formative stages.

Beginning his career as a gospel music artist and preacher, after he signed with Atlantic Records in the 1960s, his career focused along secular lines. He had a string of R&B hits, including "Cry to Me," "If You Need Me (Call Me)," "Tonight's the Night," and "Goodbye Baby (Baby Goodbye)." Most of his music, however, did not cross over to the pop charts as did fellow gospel-turned R & B stars Aretha Franklin and Wilson Pickett. Burke nevertheless reached mainstream audiences through his writing of the iconic R & B hit "Everybody Needs Somebody to Love," which became widely known from covers by The Rolling Stones, Pickett, and the soundtrack of the hit movie The Blues Brothers.

In the late 1960s, Burke left Atlantic and signed with several labels over the next decade. His biggest hit came in 1969: A cover of Creedence Clearwater Revival's "Proud Mary." In later decades he toured widely and performed at numerous R&B retrospective concerts, where his powerful voice and charismatic stage presence made him a popular attraction.

Burke was inducted into the Rock and Roll Hall of Fame in 2001. "Everybody Needs Somebody to Love" is included on Rolling Stone Magazine's list of the 500 Greatest Songs of All Time.

Burke was born James Solomon McDonald on March 21, 1940, in Philadelphia, Pennsylvania. Before his teens, he was already preaching at his family's church in Philadelphia and hosting his own gospel radio show. As a young adult, he continued working in the gospel radio business and preaching. He recorded gospel and some R&B on the Apollo label in the late 50s. In 1960, he signed with Atlantic Records and, like several other gospel singers of the era, began moving towards more secular music.

His first minor hit was "Just Out of Reach of My Open Arms" in 1961, a cover of a country song. In 1962 he reached the R & B Top Five with "Cry to Me," followed the next year by the hit recording of "If You Need Me (Call Me)." In 1964, he wrote and recorded his best-known song, "Everybody Needs Somebody to Love." The song was almost immediately covered by The Rolling Stones and later by Wilson Pickett, who paid tribute to Burke in his preaching-style introduction to the song. In 1965, Burke topped the R&B charts with "Got to Get You Off of My Mind." In 1980, "Everybody Needs Somebody" reached new audiences and became a rock and R & B standard when it was performed by John Belushi and Dan Akroyd in the climactic concert scene of the hit movie The Blues Brothers.

Burke's powerful singing and stage presence were well-received by live audiences, as well as both peers and critics. However, he was not able to break through into the mainstream. He moved to the Bell label in 1969, and recorded for Dunhill, MGM, and Chess labels in the 70s.

In the 80s and 90s, Burke was one of the chief exponents of classic soul music, touring and producing record albums in a style that merged his gospel and R&B roots. As a result, his music was mainly marketed to an audience that appreciated Burke's musical roots rather than pop music. Burke's live and recorded music remained a favorite of those who wanted to experience a legendary soul singer who had maintained his original style. In 1987, he appeared in the movie The Big Easy as Daddy Mention. He would continue to tour with a 21-piece band through the 1990s.

Known as a successful family man with a huge number of grandchildren, in 2000 Burke and his family were invited to perform at the Jubilee of the Family at the Vatican. Since then, he has been invited back to the Vatican by both Pope John Paul II and Pope Benedict XVI for the Vatican's Christmas celebration. He was inducted into the Rock and Roll Hall of Fame in 2001. 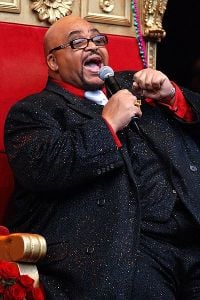 Burke's career was revived to some degree in 2002 with the release of Don't Give Up On Me on Fat Possum Records, in which he sang songs written specifically for the album by top-rank artists, including Bob Dylan, Brian Wilson, Van Morrison, and Elvis Costello. The album won the Grammy Award for Best Contemporary Blues Album.

In 2004, Burke was featured in the 2004 movie Lightning in a Bottle, singing "Turn on Your Love Light" and "Down in the Valley." In the same year he was featured on the song "I Pray On Christmas" on the Blind Boys Of Alabama album Go Tell It On The Mountain, which won a Grammy for Best Traditional Gospel Album. Also in 2004, Burke recorded a duet with Italian soul singer Zucchero.

In September 2006, Burke returned to his country roots with the release of a 14-track album titled Nashville. It included guest vocals from Emmylou Harris, Dolly Parton, Patty Griffin, Gillian Welch, and Patty Loveless. He also made a number of memorable live performance, including duets with Jerry Lee Lewis at his "Last Man Standing" concert in New York (2006) and guest slots on The Tonight Show with Jay Leno and Late Night with Conan O'Brien. In 2007, Burke co-hosted a celebration of Atlantic Records founder Ahmet Ertegun's life's work at Lincoln Center in New York.

Did you know?
Solomon Burke often performed his concerts while seated on a golden throne

In June 2008, he released a new album, Like A Fire, with songs written by Ben Harper, Eric Clapton, Jesse Harris, and Keb' Mo', for which he received a Grammy nomination. This was followed by a European summer tour with concerts in Portugal, England, Denmark, Germany, Belgium, Austria, France, Switzerland, Norway, Slovakia, and Sweden. On these last tours he often performed seated (usually in royal "King Solomon" splendor). Nevertheless, he remained an infectiously energetic presence on stage.

In 2010, Burke came out with the Willie Mitchell-produced Nothing's Impossible for E1 Entertainment, for which he also received a Grammy nomination. Later in 2010, he released his final album, Hold on Tight, a collaboration album with De Dijk, a Dutch band. 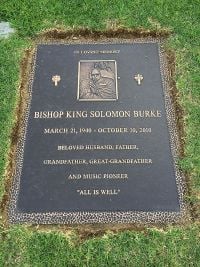 On October 10, 2010, Burke died at Amsterdam Schiphol Airport while on a plane from Washington Dulles Airport that had just landed. He had been due to perform with De Dijk in Amsterdam on October 12. His death was due to natural causes.

Burke's funeral was held on October 22, 2010, at the City of Refuge in Gardena, California and was open to the public. It was simulcast on the internet and at a memorial service held at the Sharon Baptist Church in Philadelphia that was led by Minister Lester Fields and Solomon's younger sister, Apostle Laurena Burke Corbin, and attended by Burke's extended East Coast family.

Burke was buried in the Murmuring Trees section of the Forest Lawn Memorial Park in Hollywood Hills, Los Angeles, California.

Even though Burke was not a pop hit-maker—he never had a top-20 hit on the pop charts—he made his mark as an important early pioneer in soul music. While recording for Atlantic Records in the 1960s, he infused a country sound into his R & B works, producing unique melodic ballads with sophisticated arrangements. His highly polished, emotional songs, which combined gospel, pop, and country influences, set the pattern for successful, early soul music. Burke's music played a major role in influencing major artists like the Rolling Stones, who on their early albums covered Burke's "Cry to Me" and "Everybody Needs Somebody to Love."

Considered a soul music legend, Solomon Burke was inducted into the Rock and Roll Hall of Fame in 2001. Several of his children and grandchildren have had successful careers in various facets of the music industry.

Neil Portnow, President/CEO of The Recording Academy, praised Burke soon after his death:

A deeply spiritual man, his love and passion for his craft kept him touring and performing to sold-out audiences right up to his final days ... The music industry has lost one of its most distinctive voices.[1]