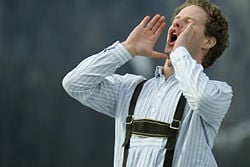 A yodeler in Salzburg, Austria

Yodeling (or yodelling, jodeling) is a form of singing that involves singing an extended note which rapidly and repeatedly changes in pitch from the vocal or chest register (or "chest voice") to the falsetto voice, making a high-low-high-low sound. This vocal technique is used in many cultures throughout the world and dates back tens of thousands of years, to the domestication of animals.

In Alpine folk music, it was probably developed in the Swiss Alps as a method of communication between mountain peaks, later becoming part of the region's traditional music. In Persian and Azeri classical music, singers frequently use tahrir, a yodeling technique that oscillates on neighboring tones. In Georgian traditional music, yodeling takes the form of krimanchuli technique, and is used as a top part in three/four part polyphony. In Central Africa, Pygmy singers use yodels within their elaborate polyphonic singing. Yodeling is often used in American bluegrass and country music.

Yodeling shows how intrinsic not only communication, but music and art are to the human condition. Having endured thousands of years, yodeling is still very popular today all over the world, having performed the dual purpose of letting people communicate and providing a format to express music as well. Yodeling, like other forms of music, provides joy to both the performer and the listener.

The yodel is an ancient rural form of calling, tens of thousands of years old and directly linked to the domestication of animals. It was a way of communicating between cowherders from mountain to mountain.[1] Yodeling developed from the sudden alterations of the vocal register, from low pitches, to high falsetto tones, sung with vowel sound, nonlexical syllables. Yodels create distinct breaks at the moment of transition between the two registers. A genuine yodel consisted of these acoustic signals and did not make up any recognizable words.

Lyrics were incorporated when cowherders began congregating in villages and singing together. In choirs or duos, one yodeler would take the lead and the others would accompany in a subtle harmony. The melody would be mostly improvised. in the Appenzell region of Switzerland, yodelers would sometimes accompany musicians who were swinging cowbells.[1]

The earliest mention of the yodel dates back to the fourth century C.E., and Roman Emperor Julian complaining about the wild, shrieking songs coming from the mountain people to the north. The earliest written record where a yodel is mentioned by name is found in a collection entitled Bicinia Galca, Latin Germanica, from 1545, where it was described as "the call of a cowherd from Appenzell."[1]

Some argue that yodels imitate the sound of the long alpenhorn, another cowherder communication tool. This remains to be corroborated and seems far-fetched, as yodeling and the domestication of grazing animals predate the invention of the alpenhorn.[1]

Yodeling was carried to the United States mostly by German immigrants. Traditional arguments trace yodeling in the United States as far back as 1815.[2] In the foothills of the Appalachian mountains, especially mid-Pennsylvania—many of the British and Irish settlers already there were meeting their new German neighbors, who happened to carry the yodeling tradition. As they migrated further south, they met Scandinavians (who practiced a unique form of yodeling called kolning), French, Mexican, and Africans, all of which further influenced the American yodel. The Germans gradually transformed their yodels into something a bit more musical, blending them with, for example, Irish narrative ballads.[1]

In the 1920s, Jimmy Rodgers, the "Father of Country Music," began to graft yodeling into the blues and country music. He influenced the likes of Hank Snow, Merle Haggard, and Gene Autry, among others. He was also responsible for infusing yodeling into jazz, after he teamed up with Louis Armstrong on "Blue Yodel #9." Around the same time, Patsy Montana was growing famous as a solo country star with her big hit, "I Wanna Be A Cowboy's Sweetheart," which included upbeat yodeling. It caught on quickly among country singers.[1]

Iranian and Azeri classical singing employ a tahrir technique, which employs a similar vocal mechanism to that used in yodeling. Tahrir frequently uses long passages in the upper vocal ranges, longer than those typically used in alpine style yodeling.[3] Singing techniques used by the Mbuti pygmies in the rainforests of Africa are also described as yodels, resembling birdsongs.[4] 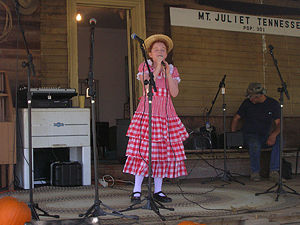 A young American yodeler shows what she can do.

All human voices are considered to have at least two distinct vocal registers, called the "head" and "chest" voices, which result from different ways that the tone is produced.[5] Most people can sing tones within a certain range of relatively lower pitch in their chest voices, and then a certain range of relatively higher pitch in their head voices. There is often a gap between these ranges, especially in inexperienced or untrained singers. Experienced singers, who can control their voices to the point where these ranges overlap, can easily switch between them to produce high-quality tones in either. Yodeling is a particular application of this technique, wherein a singer might switch between these registers several times in but a few seconds, at a high volume. Going back and forth over this "voice break" repeatedly produces a very distinctive type of sound.

For example, in the famous example syllable "Yudl—Ay—EEE—Ooooo," the "EEE" is sung in the head voice, while all other syllables are in the chest voice. The best places for Alpine-style yodeling are those with an echo. They include lakes, rocky gorges, anywhere with a distant rock face, the outdoor areas between office buildings, in a canoe next to a rocky shoreline, or down a long hallway, and best of all, a mountain range. "Appenzeller" and "Bravour Jodler" are yodeling standards which are performed by many different singers.

Yodeling is still popular. Indeed, an entire genre of music is devoted to it, known as Alpine yodeling.[6] It has also found its way from country into popular music, and retains a world-wide following. There are many yodeling festivals that take place all over the world on a yearly basis. 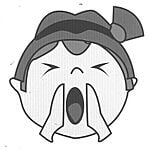 According to the Oxford English Dictionary the word yodel is derived from a German word jodeln (originally Bavarian) meaning "to utter the syllable jo."

Retrieved from https://www.newworldencyclopedia.org/p/index.php?title=Yodeling&oldid=1089760
Categories:
Hidden category:
This page was last edited on 28 November 2022, at 13:45.
Content is available under Creative Commons Attribution/Share-Alike License; additional terms may apply. See Terms of Use for details.