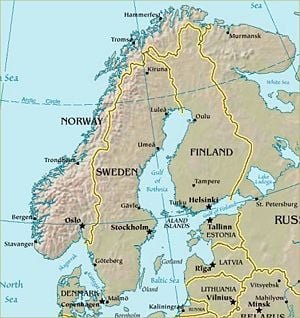 The Scandinavian Peninsula is a large peninsula in Northern Europe, consisting principally of the mainland territories of Norway and Sweden. A small part of northwestern Finland is sometimes also considered part of the peninsula. It is part of the larger Fennoscandia region which includes the Kola Peninsula, Karelia and Finland.

The peninsula is bounded by the Barents Sea of the Arctic Ocean on the north, the Kattegat and Skagerrak Seas on the south, the Norwegian Sea and North Sea on the west, and the Baltic Sea, Gulf of Bothnia and Bay of Bothnia on the east.

The Scandinavian mountain range, part of the ancient Baltic Shield, forms the border between Norway and Sweden. In Norway the mountains reach the coastline and are deeply dissected by fjords. The eastern side of the range lies in Sweden and has extensive slopes of gentle gradient down to the Baltic Sea, and consists mostly of flat, heavily forested land dotted with lakes.

The region known as Scandinavia is centered on the Scandinavian Peninsula. As a linguistics, cultural, and historic area, it covers a more inclusive range of Northern Europe. The countries of the peninsula consistently rank high on a number of international analysis and monitoring systems in such areas as foreign policy, environmental sustainability, global competitiveness, technological advancement, education, freedom of the press, human development, health, and democracy. They are recognized for their contributions toward the promotion of peace and stability throughout the world in the form of humanitarian efforts, peace keeping missions and generous foreign aid. 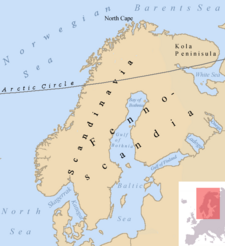 Galdhøpiggen, the highest mountain on the Scandinavian Peninsula.

The name Scandinavian is derived from Scania,[1][2][3][4] a region at the southernmost extremity of the peninsula.

The Scandinavian Peninsula is the largest peninsula in Europe. It is approximately 1,850 kilometers (1,150 miles) long and between approximately 370–805 km (230-500 mi) wide. About one quarter of the peninsula lies north of the Arctic Circle, with the northernmost point at Cape Nordkyn.

The peninsula is bordered by several bodies of water including:

The Scandinavian mountain range, which runs through the peninsula, generally defines the borders between Norway, Sweden and Finland in the north, and continues into the central parts of southern Norway. The western sides of the mountains drop precipitously into the North Sea and Norwegian Sea, forming the famous fjords of Norway, while to the northeast they gradually curve towards Finland.

Galdhøpiggen is the highest mountain on the Scandinavian Peninsula, at 2,469 m (8,100 ft) above sea level. Glittertind, also known as Glittertinden, is the second highest mountain in the range, at 2,465 m above sea level, including the glacier at its peak (without the glacier, it is 2452 m). Both mountains are located within the municipality of Lom, in the Jotunheimen mountain area. Glittertind had earlier been a challenger for the title as the highest mountain in Norway, as measurements including the glacier was slightly higher than Galdhøpiggen. The glacier has, however, shrunk in recent years, and the dispute has been settled in Galdhøpiggen's favor. [5] These mountains also house the largest glacier on mainland Europe, Jostedalsbreen.

The climate across the peninsula varies from tundra (Köppen: ET) and subarctic (Dfc) in the north, with cool marine west coast climate (Cfc) in northwestern coastal areas reaching just north of Lofoten, to humid continental (Dfb) in the central portion, and to marine west coast (Cfb) in the south and southwest.[6]

The region is rich in timber, iron and copper with the best farmland in southern Sweden. Large petroleum and natural gas deposits have been found off Norway's coast in the North Sea and the Atlantic Ocean. 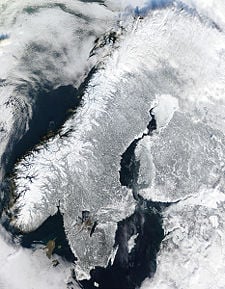 With a landscape largely shaped by glaciers over the last ice age, the Scandinavian Peninsula is as picturesque in the winter as it is cold. Image courtesy of MODIS Rapid Response Project at NASA/GSFC.

The Scandinavian Peninsula occupies part of the Baltic Shield, a stable and large crust segment formed of very old, crystalline metamorphic rocks. Most of the soil covering this substrate was scraped by glaciers during continental glaciation, especially in the northern part, where the shield is nearest the surface. As a consequence of this scouring, elevation, and climate, only a very small percentage of land is arable (3 percent in Norway).[7]

Although the Baltic Shield is largely stable and resistant to the influences of other neighboring tectonic formations, the weight of nearly four kilometers of ice sheet caused the terrain to sink. When the ice sheet disappeared, the shield rose again, a tendency that continues to this day at a rate of about 1 meter per century (Ostergren 2004). Conversely, the south part has tended to sink down to compensate, causing the flooding of the Low Countries and Denmark.

Extremely heavy, thick glaciers formed during the last ice age, deepening river valleys, which were invaded by the sea when the ice melted. The glaciers ran off the mountains and scoured troughs into Norway’s coastline with depths that reached well below sea level. When the glaciers melted, the seawater rushed into these deep troughs to form the famous fjords which line the peninsula's west side, along Norway’s coast. In the south the glaciers deposited many sedimental deposits, configuring a very chaotic landscape. Many of these fjords are well over 2,000 feet (610 meters) deep. The deepest fjord on Norway’s coast, known as Sogn Fjord, lies in southwest Norway and is 4,291 feet (1,308 m) deep.

Glaciers also carved the mountains in Norway and northernmost Sweden. South of this mountainous region, however, Sweden consists mostly of flat, heavily forested land dotted with lakes. Lake Vänern and Lake Vättern, the largest of the country’s lakes, do not freeze completely during the winter months and can be seen clearly at the bottom of the peninsula. Lake Vättern, the smaller of the two lakes, was connected to the Baltic Sea during the last ice age. After the ice melted, a tremendous weight was lifted off of the peninsula, and the landmass rose up to separate the lake from the Baltic Sea. To the northeast of the peninsula lies Finland with more than 55,000 lakes, most of which were also created by glacial deposits.

The crystalline substrate and absence of soil exposes mineral deposits of metals, such as iron, copper, nickel, zinc, silver and gold. 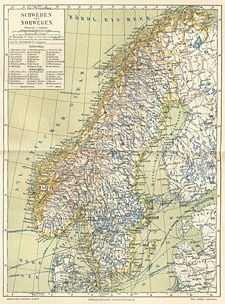 The Scandinavian Peninsula political borders in 1888.

The first recorded human presence in the southern area of the peninsula and Denmark dates from 12,000 years ago (Tilley 2003, 9). As the ice sheets from the glaciation retreated, the climate allowed a tundra biome that attracted reindeer hunters. The climate warmed gradually, favoring the growth of perennial trees first, and then deciduous forest which brought animals such as the aurochs. Groups of hunters-fishers-gatherers began to inhabit the area from the Mesolithic (8200 B.C.E.), until the advent of agriculture in the Neolithic (3200 B.C.E.).

The northern and central part of the peninsula is partially inhabited by the Sami people, often referred to as "Lapps" or "Laplanders." In the earliest recorded periods they occupied the arctic and subarctic regions as well as the central part of the peninsula as far south as Dalarna, Sweden. They speak the Sami language, a non-Indo-European language of the Finno-Ugric family, which is related to Finnish and Estonian.

The other inhabitants of the peninsula, according to ninth century records, were the Norwegians on the west coast of Norway, the Danes in what is now southern and western Sweden and southeastern Norway, the Svear in the region around Mälaren as well as a large portion of the present day eastern seacoast of Sweden and the Geats in Västergötland and Östergötland. These peoples spoke closely related dialects of an Indo-European language, Old Norse. Although political boundaries have shifted, these peoples still are the dominant populations in the peninsula in the early twenty-first century (Sawyer 1993).

Much of the present-day population of the peninsula is concentrated in its southern section; Stockholm and Gothenburg, both in Sweden, and Oslo in Norway are the largest cities.[8] 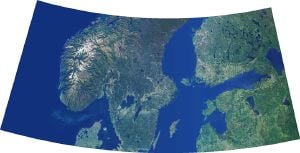 Scandinavia and the Baltic region.

Although the Nordic countries look back on more than 1,000 years of history as distinct political entities, the international boundaries of the region came late and emerged gradually. It was not until the middle of the seventeenth century that Sweden secured an outlet on the Kattegat and control of the south Baltic coast. The Swedish and Norwegian boundaries were finally agreed to and marked out in 1751. The Finnish and Norwegian border on the peninsula was established after extensive negotiation in 1809, and the common Norwegian-Russian districts were not partitioned until 1826. Even then the borders were still fluid, with Finland gaining access to the Barents Sea in 1920, but ceding this territory to Russia in 1944.[9]

Denmark, Sweden and Russia dominated political relations within the Scandinavian Peninsula for centuries, with Iceland, Finland and Norway only gaining full independence in the twentieth century.