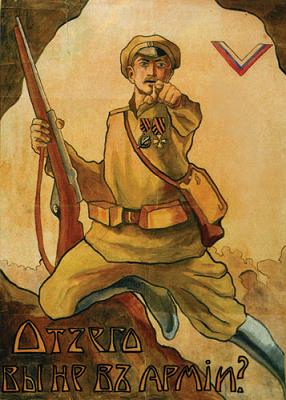 "Why aren't you in the army?" Volunteer Army recruitment poster during the Russian Civil War.

The Volunteer Army (Добровольческая армия in Russian, or Dobrovolcheskaya armiya) was a counterrevolutionary army in South Russia during the Russian Civil War of 1918-1923. Part of the wide White Russian resistance movement, the Volunteer Army itself was a spent force by early 1920, although resistance continued, mainly in the East, until June, 1923. The White movement received some support from the West European powers, who sympathized with their cause but this was inadequate and insufficient to defeat the Soviets. The Western powers were busy with the follow-up to the end of World War I, including extending their empires by carving up former German and Ottoman Empire possession among themselves. No one, too, foresaw all the implications of a communist Russia. One reason fro this was that Russia was not yet an industrial power, and did not appear to represent much of a threat. By World War II, the situation was very different and in the post-World War II world, the Soviet were a super-power in their own right, one that at times rivaled the United States for world supremacy. The Soviets were better organized and had the support, at this stage, of the general population who assumed that they would benefit from the communist system. In contrast, many aristocrats, associated with a failed, authoritarian regime, fought in the various White militia. Had the resistance movement succeeded, world history would have taken a different course. The Second World War may still have occurred but East Europe would probably not have fallen to communism, and the Cold War would not have happened.

The Volunteer Army began forming in November-December of 1917 by General Mikhail Alekseev in Novocherkassk and General Lavr Kornilov and his supporters. Konilov had been a senior officer in the Russian army. A Cossack, he became Supreme Commander-in-Chief in June, 1917 until the Soviets pulled out of the war March 3, 1919. The Volunteer Army was part of the wider so-called White Russian resistance movement against the communists. Initially, the Volunteer Army included volunteering officers, cadets, students and Cossacks. On December 27, 1917 (January 9, 1918), the creation of the Volunteer Army was officially announced. Alekseev became its overall leader, Kornilov—its Commander-in-chief, General Alexander Lukomsky - its Chief of Staff, General Anton Denikin—commander of the 1st Division and General Sergey Markov – commander of 1st Officers regiment. They also created the so called Special Council at the headquarters, which included also included prominent civilian politicians such as Peter Struve, Pavel Milyukov, Mikhail Rodzianko, Sergey Sazonov and Boris Savinkov. 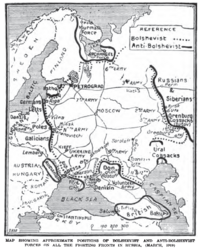 In the Autumn of 1918, the governments of Great Britain, France and the USA increased their material and technical assistance to the Volunteer Army. With the support from Entente, the forces of the South Russian Whites were combined into the so called Armed Forces of South Russia (Вооружённые силы Юга России, or Vooruzhenniye sily Yuga Rossii) under the command of Denikin. In the late 1918 – early 1919, Denikin managed to inflict a defeat on the 11th Soviet Army and capture the North Caucasus region. In January of 1919, the Caucasus Volunteer Army was divided into the Caucasus Army and the Volunteer Army, which would later be joined by the Don Army, created from the remnants of Krasnov's Cossack army. After capturing Donbass, Tsaritsyn and Kharkov in June 1919, Denikin began to advance towards Moscow on June 20 (July 3). According to his plan, the main blow to Moscow was to be inflicted by the Volunteer Army (40,000 men) under the command of General Vladimir May-Mayevsky.

The term "White Russian" refers to the opposition to the Bolshevik-communist revolutionaries, whose symbolic color was red. There was no single, dominant ideology. Among White Army leaders, neither General Kornilov of the Volunteer Army nor General Denikin also of the Volunteer Army were monarchists. On the other hand, General Wrangel—also Volunteer Army—did have monarchist sympathies, but, as he made it clear, was willing to serve under a non-Bolshevik democratically elected Russian government. In any event, although many of its officers held monarchist ideas, it is inaccurate to state, as it is done sometimes, that the White Army was a monarchist army. It can be said, however, that the White Army as a whole generally believed in a united multinational Russia (being opposed to separatists who wanted to create nation-states in the place of the old Russian Empire).

The White Army also drew support from other political movements, including democrats, social revolutionaries, and others who opposed the October Revolution; at other times and in other places, the same groups supported the Red Army instead.

The rank-and-file troops of the White Army included both active opponents of the Bolsheviks (many Cossacks, for example), and spanned a variety of volunteers and conscripts, from nobles to peasants.

Some leaders of the White movement, particularly General Wrangel, formulated political concepts based on Russian traditionalism that were taken up and developed in emigre circles after the end of the Civil War by Russian thinkers such as Ivan Ilyin; who had many philosophical similarities with the Slavophiles. This became known as the "White Idea." It has been argued if the "White Idea" was in fact developed after the war, or simply was formulated after the war in a more doctrinal format. Not all White Army veterans were sympathetic to it, although virtually all organized veterans were (i.e. the Russian All-Military Union). 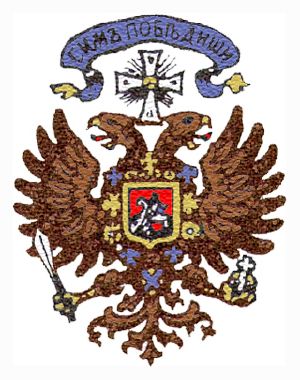 Monarchist tendencies reached a peak amidst the veterans of the White movement, while republicanism became rarer. The liberal policies of Alexander Kerensky and his socialist-democratic oriented provisional government were seen as largely responsible for preparing the country for the October Revolution. In August of 1922, two months before its defeat, the far eastern White Army of General Mikhail Diterikhs went as far as to convene the Zemskiy Sobor of Preamursk, and elect (without his participation) Grand Duke Nikolai Nikoaievich Romanov as tsar of all Russia.

There were also independent groups such as the Green Army as well as the Black Army of Nestor Makhno, who declared themselves against both the Reds and Whites, although occasionally they sought alliances with one side or the other.

At times the Western Allies, the Central Powers, and other foreign forces provided assistance to several White Army units, and there were some volunteer units on the ground. However, the Western powers were recovering from the cost and devastation of World War I, and were not in a position to offer much support even if their sympathies were on the side of the White Russians. This caused the Soviets to accuse the White Army of representing the interests of foreign powers.

The White Army was also accused by the Soviets of cruelty in its conquered territories, usually against the workers, for which the Soviet historiography would dub this regime "Denikinschina." Some of the units and formations of the Volunteer Army possessed good military skills and fighting strength due to a large number of officers in its ranks, who hated and despised the Soviets. However, the Volunteer Army's fighting efficiency started to decrease in the summer of 1919 in light of significant losses and conscription of mobilized peasants and even Red Army soldiers in captivity.

During the counter-offensive of the Red Army (since October 1919), the Volunteer Army sustained a decisive defeat and rolled back to the South. In the early 1920, it retreated to the areas beyond the Don region and was reduced to a Corps of 5,000 men under the command of General Alexander Kutepov.

On March 26 and March 27, 1920, the remnants of the Volunteer Army were evacuated from Novorossiysk to the Crimea, where they merged with the army of Pyotr Wrangel. 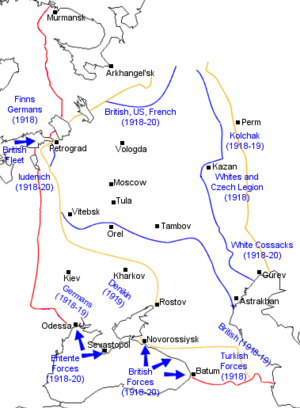 The Russian Civil War between Whites and Reds raged from November of 1917 until 1921, with isolated pockets of resistance continuing in the Far East until 1923. The White Army, with the occasional aid of Allied (and sometimes, Central powers) forces from outside Russia (Japanese, British, Canadian, French, American, German, Australian (including two who received the Victoria Cross for their actions against the Red Army), Greek, Czechoslovak) held sway in some areas (especially Siberia, Ukraine and the Crimea) for periods of time and put considerable bodies of troops into the field. But they failed to unite or to co-operate effectively amongst themselves, and the Bolshevik Red Army eventually gained the upper hand.

The major theaters of the White armies can be grouped as follows:

By 1924, the Soviets controlled the whole of mother Russia. A few White Russians continued to campaign for resistance in exile but and the communkist regime would last until its collapse in 1991. Had the Volunteer Army and the White Russians won, world history would have been very different.