From New World Encyclopedia
Jump to:navigation, search
Previous (The Tale of the Heike)
Next (The Volunteer Army)

The Times is a national newspaper published daily in the United Kingdom since 1785, and under its current name since 1788. For much of its history it has been regarded as Britain's newspaper of record and is preserved in the British Library's newspaper library in that capacity. Long regarded as one of the world's greatest newspapers, The Times has nonetheless faced financial and other challenges. Under various owners, the quality and reputation of the paper's editorial writing varied, although it continued to maintain high standards of reporting and accuracy. Challenged as all print newspapers have been by the advent of the internet, The Times has adapted and maintained its influential role. As the world moves toward increasingly effective and instant communication, the paper continues to impact society both in the role of news and opinion on matters of political import, as well as providing information in the areas of entertainment and general lifestyle interest.

The Times was founded by John Walter in 1785 as The Daily Universal Register. Unhappy with the Universal being universally ignored by the public, Walter changed the title after 940 editions on January 1, 1788, to The Times. John Walter also served as the first editor of the paper. He resigned in 1803, handing ownership and editorship to his son, John Walter the second. The first John Walter had spent sixteen months in Newgate prison for libel printed in The Times, but his pioneering efforts to obtain European news, especially from France, helped build the paper's reputation among policy makers and financiers.

The Times used contributions from significant figures in the fields of politics, science, literature, and the arts to build its reputation. For much of its early life, the profits of The Times were very large and the competition minimal, with the result that it could pay high rates for good information and writers.

In 1809, John Stoddart was appointed general editor, replaced in 1817 with Thomas Barnes. Under Barnes and his successor in 1841, John Thadeus Delane, the influence of The Times rose to great heights, especially in politics and amongst the City of London. Its companion paper, The Sunday Times, was established in 1822 with a separate editorial staff.

The Times was the first newspaper to send war correspondents to cover particular conflicts. W. H. Russell, the paper's correspondent with the army in the Crimean War, was immensely influential[1] with his dispatches back to England.

In other events of the nineteenth century, The Times opposed the repeal of the Corn Laws until the number of demonstrations convinced the editorial board otherwise, and only reluctantly supported aid to victims of the Irish Potato Famine. During the American Civil War, The Times represented the view of the wealthy classes, favoring the secessionists, but it was not a supporter of slavery.

John Walter the third succeeded his father in 1847. Though the Walters were becoming more conservative, the paper continued as more or less independent. From the 1850s, however, The Times began to suffer from the rise in competition from the "penny press," notably The Daily Telegraph and The Morning Post.

In 1908, Alfred Harmsworth, 1st Viscount Northcliffe, bought the struggling paper. He secured the paper financially, but his sensationalist approach led to a loss in reputation as a serious newspaper.

In 1922, John Jacob Astor, a son of William Waldorf Astor, 1st Viscount Astor, bought The Times from the Northcliffe family estate. The paper gained a measure of notoriety in the 1930s with its advocacy of German appeasement. Sir William Haley, who had served as general director of the BBC, took over the editorship in 1952. Under his leadership, The Times regained its editorial reputation.

In 1967, members of the Astor family sold the paper to Canadian publishing magnate Roy Thomson, and in the same year it started printing news on the front page for the first time. (Previously, the paper's front page featured small advertisements, usually of interest to the moneyed classes in British society.)

An industrial dispute left the paper shut down for nearly a year (December 1, 1978 – November 12, 1979). Union demands were at loggerheads with the Thomson Corporation's desire to cut jobs. In order to save both titles, the company was forced to find a buyer who could afford to maintain the costly operation or the power to break the Printing Union's influence over the affairs of the paper. Several possible buyers appeared, including Robert Maxwell, and Lord Rothermere; however, only one buyer was in a position to take over successfully—the Australian media baron Rupert Murdoch. In 1981, The Times and The Sunday Times were purchased from Thomson by Rupert Murdoch's News International. Both papers had their survival guaranteed and it marked a significant own goal for the radical elements within the Trade Union movement.

Murdoch soon began making his mark on the paper, replacing its editor, William Rees-Mogg, with Harold Evans in 1981. One of his most important changes was in the introduction of new technology and efficiency measures. In March-May 1982, following agreement with print unions, the hot-metal Linotype printing process used to print The Times since the nineteenth century was phased out and replaced by computer input and photo-composition. This allowed the staff of the print rooms of The Times and The Sunday Times to be reduced by half from 375 to 186.[2] However, direct input of text by journalists ("single stroke" input) was still not achieved, and this was to remain an interim measure until 1986, which saw The Times move from its home at New Printing House Square in Gray's Inn Road (near Fleet Street) to new offices in Wapping.[3]

In November 2003, News International began producing the newspaper in both broadsheet and compact (or tabloid) sizes. On September 13, 2004, the weekday broadsheet was withdrawn from sale in Northern Ireland. Since November 1, 2004, the paper has been printed solely in compact format. Whilst the newspaper published dual editions, some claimed that the compact version featured more sensationalist stories than the broadsheet, such as celebrities on the front page.[4][5] This was denied by management at News International.[6][7]

The certified average circulation figures for November 2005 showed that The Times sold 692,581 copies per day. This was the highest achieved under Robert Thomson's editorship, and ensured that the newspaper remained ahead of The Daily Telegraph in terms of full rate sales, although The Daily Telegraph remains the market leader for broadsheets, with a circulation of 905,955 copies, owing to over 300,000 discount subscribers each day. Tabloid newspapers, such as The Sun, have continued to outsell both papers with a circulation of around 3,274,855, with their far broader appeal and content.

Long considered the UK's newspaper of record, The Times is generally viewed as a serious publication with high standards of journalism. Others, including employees of The Times, feel it has gone downmarket since being acquired by Murdoch,[8] citing its coverage of celebrities as evidence, though this increased coverage of and emphasis on celebrity- and sports-related news is rarely given prominence on the front page.

Although usually editorially independent, some such as Robert Fisk,[9] seven times British International Journalist of the Year, became critical. Fisk resigned as foreign correspondent in 1988 over what he saw as political censorship of his article on the shooting down of Iran Air Flight 655 in July of that year.

The British Business Survey 2005 named The Times as the UK's leading daily newspaper for business people. This independent survey was sponsored by The Financial Times, The Guardian, The Daily Telegraph, The Economist, and The Times.

The latest figures from the national readership survey show The Times to have the highest number of middle class 25–44 year-old readers, and the largest numbers of readers in London of any of the "quality" papers. 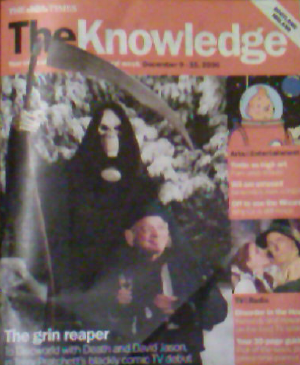 T2 was developed as The Times' main supplement, featuring various lifestyle columns. On September 5, 2005, it relaunched as Times 2, aimed at women and describing itself as The thinking woman's daily supplement. It has an image of the day and a modern morals column, where people write in asking if they lead moral lives. The supplement continues to be popular with male readers, containing a sudoku and a simpler, concise crossword puzzle.

Crème is the newspaper's supplement for "PAs, secretaries, executive assistants and anyone who works in administrative support."[10] It is read by more secretaries than The Guardian and The Evening Standard.

The Times Magazine accompanies the newspaper on Saturday, and features columns touching on various subjects such as celebrities, fashion and beauty, food and drink, homes and gardens or simply writers' anecdotes. Notable contributors have included Gordon Ramsay, one of Britain's highest profile chefs, and Giles Coren, Food And Drink Writer of the Year in 2005.

The Knowledge is supplied in the newspaper on Saturday. This includes information on 'Arts & Entertainment' and 'TV & Radio', offering detailed information on shows. It is usually divided into sections of 'Starts', 'Screen' which includes film, DVD, Internet, and Games, 'Stages' which is further split into Theatre, Dance, Opera, and Comedy, 'Sounds' which provides information about Music, Clubs, and Concerts, and 'Sights' further sectioned into Museums, Galleries, Events, and Kids.

Body and Soul is included with Saturday editions. This is a weekly guide to a better lifestyle, and also includes a pull out named The Times Money.