Alexander Fyodorovich Kerensky (Russian: Алекса́ндр Фёдорович Ке́ренский, Aleksandr Fjëdorovich Kerenskij) (May 4 [O.S. April 22] 1881 – June 11, 1970) served as the second Prime Minister of the Russian Provisional Government until Vladimir Lenin was elected by the All-Russian Congress of Soviets following the Bolshevik coup d'etat in which the Provisional Government was overthrown by the Bolsheviks and replaced by the Soviet during the October Revolution.

In the aftermath of the collapse of the autocracy, hastened by Russian losses in World War I, and caught between the monarchists and the revolutionaries, Kerensky proved unable to create a functioning government. The result was a short-lived attempt at creating democracy. However, autocratic Russia was without a strong civil society and democratic institutions on which to create such a government. What followed was the takeover by the communists, who would rule Russia until their collapse in 1991.

Kerensky, a son of a headmaster, was born in Simbirsk (now Ulyanovsk), the same town as Vladimir Lenin (then Ulyanov). At one point Kerensky's father, Fyodor, had taught the young Vladimir Ulyanov at Kazan University. Kerensky graduated with a degree in Law from St. Petersburg University in 1904. He showed his political allegiances early on, with his frequent defense of anti-Tsarist revolutionaries. He was elected to the Fourth Duma in 1912 as a member of the Trudoviks, a moderate labor party. A brilliant orator and skilled parliamentary leader, he became a member of the Provisional Committee of the Duma as a Socialist Revolutionary and a leader of the socialist opposition to the regime of the ruling tsar, Nicholas II.

When the February Revolution broke out in 1917, Kerensky was one of its most prominent leaders, and was elected vice-chairman of the Petrograd Soviet. He simultaneously became the first Minister of Justice in the newly-formed Provisional Government. When the Soviet passed a resolution prohibiting its leaders from joining the government, Kerensky delivered a stirring speech at a Soviet meeting. Although the decision was never formalized, he was granted a de facto exemption and continued acting in both capacities.

After the first government crisis over Pavel Milyukov's secret note re-committing Russia to its original war aims on May 2-4, Kerensky became the Minister of War and the dominant figure in the newly formed socialist-liberal coalition government. Under Allied pressure to continue the war, he launched what became known as the Kerensky Offensive against the Austro-Hungarian/German South Army on June 17 (Old Style). At first successful, the offensive was soon stopped and then thrown back by a strong counter-attack. The Russian Army suffered heavy losses and it was clear from many incidents of desertion, sabotage, and mutiny that the Russian Army was no longer willing to attack.

Kerensky was heavily criticized by the military for his liberal policies, which included stripping officers of their mandate (handing overriding control to revolutionary inclined "soldier committees" instead), the abolition of the death penalty, and the presence of various revolutionary agitators at the front. Many officers jokingly referred to commander-in-chief Kerensky as "persuader-in-chief."

On July 2, 1917, the first coalition collapsed over the question of Ukraine's autonomy. Following widespread unrest in Petrograd and suppression of the Bolsheviks, Kerensky succeeded Prince Lvov as Russia's Prime Minister. Following the Kornilov Affair at the end of August and the resignation of the other ministers, he appointed himself Supreme Commander-in-Chief as well. He retained his other posts in the short-lived Directory in September and the final coalition government in October 1917 until it was overthrown by the Bolsheviks.

Kerensky's major challenge was that Russia was exhausted after three years of war, while the provisional government did not offer much motivation for a victory outside of continuing Russia's obligations towards its allies. Furthermore, Lenin and his Bolshevik party were promising "peace, land, and bread" under a communist system. The army was disintegrating due to a lack of discipline, which fostered desertion in large numbers.

Despite the pressure, Kerensky and the other political leaders continued their obligation to Russia's allies by continuing its involvement in World War I. They feared that the economy, already under huge stress from the war effort, might become increasingly unstable if vital supplies from France and the United Kingdom were cut off. Some also feared that Germany would demand enormous territorial concessions as the price for peace (which indeed happened in the Treaty of Brest-Litovsk). The dilemma of whether to withdraw was a great one, and Kerensky's inconsistent and impractical policies further destabilized the army and the country at large.

Furthermore, Kerensky adopted a policy that isolated the right-wing conservatives, both democratic and monarchist-oriented. His philosophy of "no enemies to the left" greatly empowered the Bolsheviks and gave them a free hand, allowing them to take over the military arm or "voyenka" of the Petrograd and Moscow Soviets. His arrest of Kornilov and other officers left him without strong allies against the Bolsheviks, who ended up being Kerensky's strongest and most determined adversaries, as opposed to the right wing, which evolved into the White movement.

During the Kornilov affair, or the "Kornilov" mutiny as it was termed by Soviet historiography, Kerensky had distributed arms to the Petrograd workers, and by October most of these armed workers had gone over to the Bolsheviks. From October 25 1917 to October 27 1917 the Bolsheviks launched the second Russian revolution of the year. Kerensky's government in Petrograd had almost no support in the city. Only one small force, the First Petrograd Women's Battalion, was willing to fight for the government against the Bolsheviks, but this force too crossed over to the revolution without firing a single shot. It took less than 20 hours before the Bolsheviks had taken over the government with virtually no resistance.

Kerensky escaped the Bolsheviks and went to Pskov, where he rallied some loyal troops for an attempt to retake the capital. His troops managed to capture Tsarskoe Selo, but were beaten the next day at Pulkovo. Kerensky narrowly escaped, and spent the next few weeks in hiding before fleeing the country, eventually arriving in France. During the Russian Civil War he supported neither side, as he opposed both the Bolshevik regime and the White Movement. 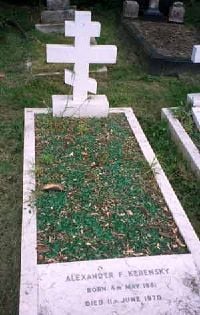 Kerensky lived in Paris until 1940, engaged in the endless splits and quarrels of the exiled Russian democratic leaders. In 1939, Kerensky married the former Australian journalist Lydia ‘Nell' Tritton. When the Germans overran France at the start of World War II, they escaped to the United States. Tritton and Kerensky married at Martins Creek, Pennsylvania. In 1945, his wife became terminally ill. He traveled with her to Brisbane, Australia and lived there with her family until her death in February 1946. Thereafter he returned to the United States, where he lived for the rest of his life.

When Adolf Hitler's forces invaded the Soviet Union in 1941, Kerensky offered his support to Stalin, but received no reply. Instead, he made broadcasts in Russian in support of the war effort. After the war he organized a group called the Union for the Liberation of Russia, but this achieved little support.

Kerensky eventually settled in New York City, but spent much of his time at the Hoover Institution at Stanford University in California, where he both used and contributed to the Institution's huge archive on Russian history, and where he taught graduate courses. He wrote and broadcast extensively on Russian politics and history. His last public speech was delivered at Kalamazoo College, in Kalamazoo, Michigan.

Kerensky died at his home in New York City in 1970, one of the last surviving major participants in the turbulent events of 1917. The local Russian Orthodox Churches in New York refused to grant Kerensky burial on the ground that he was a freemason and largely responsible for Russia falling to the Bolsheviks. A Serbian Orthodox Church also refused. Kerensky's body was then flown to London where he was buried at Putney Vale non-denominational cemetery.

Kerensky is often portrayed as a Russian "Hamlet," unable to take decisive action while events around him were swirling out of control. In hindsight, had he understood the threat of the impending Bolshevik Revolution, there are undoubtedly things that he would have done differently. His failure was largely due to inability to grasp the nature of the Bolshevik threat but also his adherence to state apparati that no longer worked. "Kerensky was trying to maintain the forms of a government functioning under normal legal procedures in a State lacking both armed power and popular approval."[1]

Our major purpose was to unite all the creative forces of the country in order (1) to re-establish the functioning of the state apparatus, (2) to create the basis of a new post-revolutionary political and social order, and (3) to continue the defense of the country. The only way of opposing the forces of disruption which were driving the country into chaos and civil war, was to draw into the government the leading representatives of all political parties without exception, whether bourgeois or socialist, which recognized the new order and the supreme authority of the Constituent Assembly (Russia). It was clear that the latter had to be summoned, in spite of the war, at the earliest possible date.[2]

However, there were several problems with this plan. The attempt to include everyone, including the soldiers who were away at war in the voting for the Constituent Assembly delayed its creation. That together with Kerensky's refusal to pull out of the war undermined the support for the Provisional Government and allowed his enemies to organize a coup d'etat.