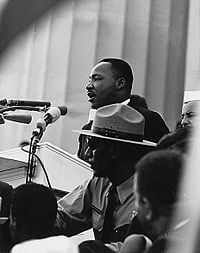 American Civil Rights Movement is one of the most famous social movements of the twentieth century. Here, Martin Luther King is giving his "I Have a Dream" speech, in front of the Lincoln Memorial during the 1963 March on Washington for Jobs and Freedom

Social movements are large informal groupings of individuals and/or organizations focused on specific political or social issues. They are a type of group action. Modern Western social movements became possible through education (the wider dissemination of literature), and increased mobility of labor due to the industrialization and urbanization of nineteenth century societies. It has been suggested that the freedom of expression, education, and relative economic independence prevalent in the modern Western culture is responsible for the unprecedented number and scope of various contemporary social movements. However others point out that many of the major social movements of the last hundred years grew up, like the Mau Mau in Kenya, to oppose Western colonialism.

Political science and sociology have developed a variety of theories and empirical research on social movements. For example, some research in political science highlights the relation between popular movements and the formation of new political parties. Generally, though, the emergence of social movements is tied to perceived need for social change and the opportunity for the general public to express their protest. In recent times, the awareness of the need for social change has been coupled with a climate in which such change has become possible. This reflects the advance of humankind toward a world in which human rights of all are recognized and people desire to live in peace and harmony, with prosperity for all.

The term social movement was introduced in 1850, by the German sociologist Lorenz von Stein in his book, History of the French Social Movement from 1789 to the Present (1850).

Sidney Tarrow defines a social movement as "collective challenges to elites, authorities, other groups or cultural codes by people with common purposes and solidarity in sustained interactions with elites, opponents and authorities." He specifically distinguishes social movements from political parties and interest groups.[2]

Social movements thus defined did not exist before the late eighteenth century, although individual elements like campaigns have a longer history.[3] Tilly argues that the early growth of social movements was connected to broad economic and political changes including parliamentarization, market capitalization, and proletarianization.

Political movements that evolved in late eighteenth century, like those connected to the French Revolution and Polish Constitution of May 3, 1791, are among the first documented social movements, although Tilly notes that the British abolitionist movement has "some claim" to be the first social movement (becoming one between the sugar boycott of 1791, and the second great petition drive of 1806). The labor movement and socialist movement of the late nineteenth century are seen as the prototypical social movements, leading to the formation of communist and social democratic parties and organizations. From 1815, Great Britain after victory in the Napoleonic Wars, entered a period of social upheaval. Similar tendencies were seen in other countries as pressure for reform continued, for example in Russia with the Russian Revolution of 1905 and of 1917, resulting in the collapse of the Russian State around the end of the First World War.

In 1945, Britain, after victory in the Second World War, entered a period of radical reform and change. In the 1970s, women's rights, peace, civil rights, and environmental movements emerged, often dubbed "New Social Movements." Some find in the end of the 1990s, the emergence of a new global social movement, the anti-globalization movement. Some social movement scholars posit that with the rapid pace of globalization, the potential for the emergence of new types of social movement is latent—they make the analogy to national movements of the past to describe what has been termed a global citizens movement.

Sociologists have developed several theories related to social movements. Chronologically they include:

Social movements differ in scope, type of change aimed for, target of the movement, methods used, and geographic range.

There are two types of scope: Reform and radical. Reform movements are dedicated to changing some norms, usually legal ones. Examples of such a movement would include a trade union with the goal of increasing workers' rights, a green movement advocating a set of ecological laws, or a movement supporting the introduction of capital punishment or the right to abortion. Some reform movements may advocate a change in custom and moral norms, for example, condemnation of pornography or proliferation of a particular religion. The nature of such movements is not just related to the issue but also to the methods used. There could be reformist or radical methods used to achieve the same end.

Radical movements are dedicated to changing value systems. Those involve fundamental changes, unlike the reform movements. Examples include the American Civil Rights Movement which demanded full civil rights and equality under the law to all Americans regardless of race (this movement was broad and included both radical and reformist elements), the Polish Solidarity (Solidarność) movement which demanded the transformation of communist political and economy system into democracy and capitalism, and the South African shack dwellers' movement Abahlali baseMjondolo which demanded the full inclusion of shack dwellers into the life of cities.

Social movements can be either innovative or conservative in nature. Innovative movements want to enable particular norms, values, and so forth. The singularitarianism movement advocating deliberate action to effect and ensure the safety of the technological singularity is an example of an innovation movement. Conservative movements try to preserve existing norms and values for example, anti-immigration groups. The anti-machines nineteenth century Luddites movement or the modern movement opposing the spread of genetically modified food could be seen as conservative movements in that they aimed to fight specific technological changes. However they are progressive in ways that movements that are simply anti-change per se, (such as being anti-immigration) by being against a specific change that they consider to be harmful to society. 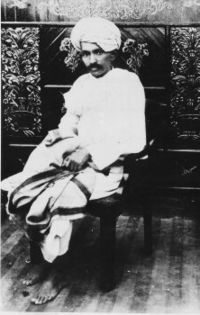 Gandhi in 1918, when he led the Kheda Satyagraha.

Peaceful movements stand in contrast to violent movements. Within violent movements, there is a distinction drawn between regular fighting and terrorist tactics. The Zapatista Army of National Liberation is an example of traditional arms whereas Hezbollah, Basque Euskadi Ta Askatasuna (ETA), or Provisional Irish Republican Army (IRA) are examples of organizations that have used terrorist tactics on occasion.

Movements can be as small as a school or can reach a global scale. Global movements have goals or objectives for the entire human race. Examples include the first, second, third, and fourth internationals (where Marx and Bakunin met), the World Social Forum, the PGA and the anarchist movement seek to change society at a global level. Most social movements have a more local scope. They are based on local or regional objectives, such as protecting a specific natural area, lobbying for the lowering of tolls in a certain motorway, or squatting a building about to be demolished for gentrification and turning it into a social center.

Social movements are not eternal. They have a life cycle: They are created, they grow, they achieve successes or failures, and, eventually, they dissolve and cease to exist.

They are more likely to evolve in the time and place which is friendly to the social movements: Hence, their evident symbiosis with the nineteenth century proliferation of ideas like individual human rights, freedom of speech, and civil disobedience. Social movements occur in liberal and authoritarian societies, but in different forms. There must always be polarizing differences between groups of people: in the case of "old movements," they were the poverty and wealth gaps. In case of the "new movements," they are more likely to be the differences in customs, ethics, and values. Finally, the birth of a social movement needs what sociologist Neil Smelser calls an "initiating event:" A particular, individual event that will begin a chain reaction of events in the given society leading to the creation of a social movement.

For example, the American Civil Rights movement grew from the reaction to black woman, Rosa Parks, riding in the whites-only section of the bus (although it is important to note that Rosa Parks was not acting alone or spontaneously—typically activist leaders lay the groundwork behind the scenes of interventions designed to spark a movement). The Polish Solidarity movement, which eventually toppled the communist regimes of Eastern Europe, developed after trade union activist Anna Walentynowicz was fired from work. The South African shack dwellers' movement Abahlali baseMjondolo grew out of a road blockade in response to the sudden selling off of a small piece of land promised for housing to a developer. Such an event is also described as a volcanic model—a social movement is often created after a large number of people realize that there are others sharing the same value and desire for a particular social change. Thus, one of the main difficulties facing the emerging social movement is spreading the very knowledge that it exists. Second is overcoming the free rider problem—convincing people to join it, instead of following the mentality "why should I trouble myself when others can do it and I can just reap the benefits after their hard work."

Many social movements are created around some charismatic leader. After the social movement is created, there are two likely phases of recruitment. The first phase will gather the people deeply interested in the primary goal and ideal of the movement. The second phase usually comes after the given movement had some successes and has become popular. People who join in this second phase will likely be the first to leave when the movement suffers any setbacks and failures.

Eventually, the social crisis can be encouraged by outside elements, like opposition from government or other movements. However, many movements had survived a failure crisis, being revived by some hardcore activists even after several decades.