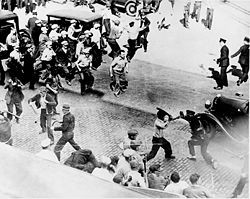 Teamsters, armed with pipes, riot in a clash with police in the Minneapolis Teamsters Strike of 1934.

Riots occur when crowds or even small groups of people gather to commit acts of violence and property damage, usually in reaction to a perceived grievance or out of dissent. Some claim that rioters are motivated by a rejection of, or frustration with, legal channels through which to air their grievances. Riots typically involve vandalism and the destruction of private and public property. The specific property to be targeted varies depending on the cause of the riot and the inclinations of those involved. Targets can include shops, cars, restaurants, state-owned institutions, and religious buildings. Due to the nature of riots, inherently violent and with large numbers of angry people, personal injury is a likely outcome. Although the grievances that lead to riots are often justified, and the authorities as much to blame as the mob of angry people, the use of violence to achieve these goals is problematic. Civil disobedience, the use of non-violent resistance to injustice, is a preferable option. The ultimate solution, however, is a society in which all members are able to live in happiness and prosperity, with their needs and desires respected and channels of communication functioning to resolve any problems.

Legal Definitions of a Riot

Under English law, a riot is defined by the Public Order Act 1986 as 12 or more persons who "together use or threaten unlawful violence for a common purpose and the conduct of them (taken together) is such as would cause a person of reasonable firmness present at the scene to fear for his personal safety." A single person can be liable for an offense of riot when they use violence provided that it can be shown there were at least 12 present using or threatening violence. The violence can be against the person or against property. This carries the possibility of a fine and a sentence of up to ten years' imprisonment.

If there are fewer than 12 people present, the lesser offense of "violent disorder" is charged, for which there is a requirement for at least three persons to use or threaten unlawful violence together. This is defined similarly to riot, but no common purpose is required.

Until 1973, the Riot Act had to be read by an official—with the wording exactly correct—before any police action could take place. The wording that had to be read out to the assembled gathering was as follows:

Our Sovereign Lord the King chargeth and commandeth all persons, being assembled, immediately to disperse themselves, and peaceably to depart to their habitations, or to their lawful business, upon the pains contained in the act made in the first year of King George, for preventing tumults and riotous assemblies. God Save the King.

If the group did not disperse after the act was read, lethal force could legally be used against the crowd.

Under United States federal law, a riot is defined as

As every state in the United States has its own laws (subject to the Supremacy Clause), each has its own definition of riot. In New York State, for example, the term "riot" is not defined explicitly, but under § 240.08 of the N.Y. Penal Law, “A person is guilty of inciting to riot when he urges ten or more persons to engage in tumultuous and violent conduct of a kind likely to create public alarm.”[2]

Riots have occurred for many different reasons. Examples include discontent as a result of poor working or living conditions, government oppression, taxation or conscription, conflicts between races or religions, or even the outcome of a sporting event.

A race riot or racial riot is an outbreak of violent civil unrest in which racism is a key factor. The term entered the English language in the United States in the 1890s. Early use of the term in the United States referred to race riots involving dominant culture mob action against individuals or groups of people from minority races. Much later, the term came to describe violence and property destruction by racial minority groups, often directed at neighborhood businesses, government representatives, and law enforcement agencies perceived as unfairly targeting racial groups. Mob rule, religious animosity, vigilantism, Jim Crow, lynching, racial profiling, economics, police brutality, institutional racism, urban renewal, and racial identity politics are often cited as causes of these riots.

A prison riot occurs in a prison, usually when those incarcerated rebel openly against correctional officials. It is usually instigated by prisoners who claim that the administration is degrading them, by direct physical or psychological force. Riots may also be caused by poor living standards, such as improper plumbing, lack of exercise time, a lack of educational facilities, or lack of the privilege of attending them. A prison riot can also occur because the criminals housed inside prisons simply want to be disorderly.

Student riots, college riots, or campus riots are riots precipitated by students from a college, university, or other school. These riots often occur after football games, and can be seen as a form of hooliganism; however, sports are not always the cause of such riots. College riots were generally political in nature in the 1960s and the 1970s, and sometimes were a result of peaceful demonstrations oppressed by the authorities. Alcohol abuse has also been involved in fueling college riots.[3] 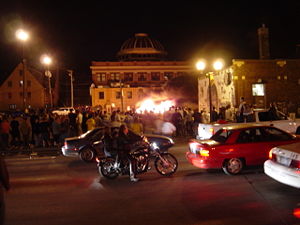 Fans of the Minnesota Golden Gophers riot in the Dinkytown neighborhood of Minneapolis, Minnesota after the Gophers won the 2003 Frozen Four.

Violence by supporters of sports teams dates back to Roman times, when supporters of chariot racing teams were frequently involved in major sports riots. A notable example of this is the Nika riots of 532.

In both the stands and the streets, sports fans may resort to violence to express loyalty to a team, to release frustration with a team’s performance, or to intimidate opponents. Violence may also be related to nationalism or as an outlet for underlying social tensions. It is often alcohol-related.

The actions of English football hooligans in the 1980s caused English teams to be banned from European competition for six years after the Heysel Stadium disaster in 1985. There was a collective sigh of relief from security experts in the United States when England failed to qualify for the 1994 FIFA World Cup. Alan Rothenberg, chairman of the World Cup organizing committee in the United States in 1994, said:

There were three countries in the world whose presence would have created logistical and security problems, so we're very pleased they won't be coming: Iraq, Iran and England.[4]

Riots are typically dealt with by the police (as riot control), although methods differ from country to country. Tactics and weapons used can include attack dogs, water cannons, plastic bullets, rubber bullets, pepper spray, and flexible baton rounds. Many police forces, such as the London Metropolitan Police Service, have dedicated divisions to deal with public order situations. The policing of riots is controversial due to allegations that officers instigate, provoke, or exacerbate situations into full-blown riots; also, while the weapons described above are officially designated as non-lethal, a number of people have been injured or died as a result of their use.

Rioters often make use of various tactics to counter the police, including gas masks (to protect against chemical weapons), projectiles such as rocks, bottles and Molotov cocktails, and firecrackers to scare away K-9 units, and the removal of police weapons (batons, shields).

Federal troops firing at the oncoming mob in the New York Draft Riots.

The worst riots in United States history with respect to lives lost were the New York Draft Riots, which took place during the Civil War when immigrant factory workers forcibly resisted the federal government's military draft.

The 1992 Los Angeles riots were regarded as the worst in twentieth-century U.S. history. The 1968 Democratic National Convention, however, saw the most well-remembered riots and were a strong influence towards the eventual American withdrawal from Vietnam at the end of the Vietnam War. Also notable were riots in response to the assassination of civil rights leader Martin Luther King, Jr., the anarchist and anti-globalization riots such as the Seattle protests of the WTO Ministerial Conference of 1999, known as the "Battle of Seattle," and the 2005 Toledo Riot between neo-Nazis and protesters in Toledo, Ohio.[5] 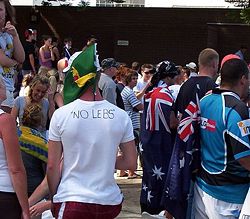 The Sydney Riot of 1879 is one of the earliest riots at an international cricket match. Riots have become major news generators, including the Aboriginal riots in response to the death of an Aboriginal boy,[6] and the 2005 summer race riots on the beaches of the eastern Sydney suburbs, most prominently Cronulla.[7]

The Partition of India in 1947 was a traumatic event in South Asian history that followed the independence of the region from British colonial rule. The ensuing riots resulted in the deaths of hundreds of thousands of Hindus and Muslims, with Hindus being massacred in the newly formed Pakistan, and Muslims being killed in India.

The Tiananmen Square protests of 1989 were a series of demonstrations led by students, intellectuals, and labor activists in the People's Republic of China (PRC) between April 15, 1989 and June 4, 1989. The demonstrations centered on Tiananmen Square in Beijing, and garnered world attention. Following the violence, the government conducted widespread arrests to suppress protesters and their supporters, cracked down on other protests around China, banned the foreign press from the country, and strictly controlled coverage of the events in the PRC press.

The Jakarta Riots of May 1998 were a series of riots against ethnic Chinese Indonesians in Jakarta and Surakarta, Indonesia. There were also hundreds of documented accounts of ethnic Chinese women being raped, tortured, and killed.[8] Human rights groups determined that the Indonesian military was involved in the riots, which degenerated into a pogrom.[9]

In 2006, there were nationwide riots in Pakistan and numerous other areas over the Jyllands-Posten Muhammad cartoons controversy.[10]