Seiko emphasizes the idea that "reliable quality is the starting point of communication between Seiko and its customers"[1] in its corporate motto: "True communications with customers through reliable quality."[2] The company identifies "trust" as the social value it is aiming for. Social values such as trust are not only a strong foundation for business, but also the foundation of society itself. Social values define corporate responsibility and corporate ethics. 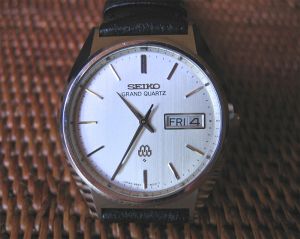 In 1913, Seikosha launched the first wrist watch made in Japan, the Laurel. The first watches produced under the Seiko brand appeared in 1924. In 1930, Seiko began to manufacture camera shutters. The watch production division split off in 1937, as Daini Seikosha Co., Ltd., predecessor of today's Seiko Instruments Inc.; and in 1947, after the end of World War II, the retail division became Wako Co., Ltd. The company, which had been incorporated as K. Hattori & Co., Ltd. in 1917, listed on the Tokyo Stock Exchange in 1949. In 1953, Seiko sponsored Japan’s first TV commercial.

In 1958, Seiko began making commercial quartz clocks for broadcasters, using electronic oscillators regulated by quartz crystals to create a signal with a very precise frequency, that measured time more accurately than mechanical clocks. In 1969, Seiko introduced the Seiko Astron, the world's first production quartz watch; when it was introduced, it cost the same as a medium-sized car. Seiko went on to produce the first quartz chronograph. Quartz clocks and watches soon proliferated, due to their low cost of production and inherent accuracy.

In 1982, Seiko introduced the first TV watch. The company was renamed Hattori Seiko Co., Ltd. in 1983. In 1985, Orient Watches and Seiko established a joint factory. In 1990, the company became Seiko Corporation. After reconstructing and creating its operating subsidiaries (such as Seiko Watch Corporation, Seiko Clock Inc.), it became a holding company in 2001, and was renamed Seiko Holdings Corporation in July 2007.[4]

Seiko expanded its expertise in timepiece technology into many areas, including precision camera components, eyeglasses, and special lenses for electronic devices, timers for appliances, integrated circuit tags, and golf clubs. Seiko-Epson produces networking hardware, software, printers, and time recorders for businesses and manufacturers. Seiko is one of the few wristwatch manufacturers that produces all of its watches and movements, including lubrication oils and the luminous compounds used on watch dials, entirely in-house. Seiko has a reputation for luxury products; its strategies for sales and marketing, and for providing customer service, have become a subject of study for many business students. Seiko has been the official timekeeper at many major sporting events, including several Olympic Games (1964, 1972, 1992, 1994, 1998, and 2002) and Football World Cups (1978, 1982, 1986, and 1990).

Seiko Group (セイコー・グループ, Seikō Gurūpu) consists of three core companies, Seiko Holdings Corporation (Seiko), Seiko Instruments Inc. (SII), and Seiko Epson Corporation (Epson), all utilizing timepiece technologies in their products. Although they have some common shareholders, including the key members of the Hattori family, the three companies in the Seiko Group are not affiliated, and are managed and operated independently. Epson has established its own brand image and rarely uses "Seiko."

Seiko Holdings Corporation (SEIKO, TYO: 8050, headquartered in Tokyo), is one of the three core companies of the Seiko Group. It includes the following business lines:

Seiko is perhaps most famous for its wristwatches. Seiko is known for its advanced technology, and is one of the few wristwatch manufacturers that produces all of its watches and movements entirely in-house. Even secondary items, such as the oils used in lubricating the watches, and the luminous compounds used on the hands and the dials, are produced by the Seiko factories.

Seiko produces both quartz and mechanical watches, sold for prices ranging from around US$50 to as much as US$150,000 for the Credor Spring Drive Sonnerie in Rose Gold.[5] Seiko's mechanical watches, including the common Seiko "5" series (“5” representing the 5 essential features of the watch: Shock resistant, water resistant, automatic, with day and date display), the Seiko automatic Chronometer series, the "Bell-Matic" with a mechanical alarm, and the luxury "Credor," "King Seiko," and "Grand Seiko" lines, are the most prized by collectors.

Seiko Kinetic watches now account for a large proportion of sales. These watches have the accuracy of quartz and are entirely powered by the movements of the wrist during everyday wear. 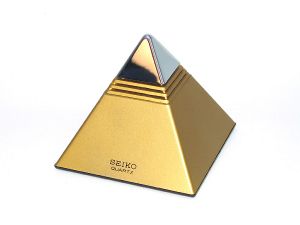 Seiko portrays its watches as a means of enhancing enjoyment of life, expressing pride, and sharing joy and emotion. Seiko Watch Corporation handles the marketing program, product planning, and after-market servicing for the Seiko, Credor, and Wired brands in Japan, and for the Seiko, Pulsar, Alba, and Lorus brands internationally.[6]

Seiko Clock Inc. dates to the earliest days of “Hattori Tokeiten,” and handles every aspect of the clock business, from product planning and development to production, sales, and service. It has manufacturing bases both in Japan and overseas; its Hong Kong base manages overseas marketing. The company seeks to deliver superior products to market through quality, innovative technology and technical prowess.[7]

In 1997, Seiko Epson publicly announced the "Spring Drive," a new watch movement developed in collaboration with Seiko Instruments and Seiko Holdings.[8] It was presented at the 1998 Basel Watch Fair and first appeared commercially in the Credor "luxury watch" range as a limited edition in 1999. A version which included an automatic winder was shown in Seiko models at the 2005 Basel Watch Fair.

Like a mechanical watch, the spring drive uses a mainspring, barrel, automatic winder, and stem winding to store energy, but the conventional escapement is replaced with a device that Seiko calls a Tri-synchro Regulator to regulate the unwinding of the mainspring. The regulator controls the use of the three forms of energy used in the Spring Drive mechanism: the mechanical power of the mainspring, created by the automatic winder; the electrical energy generated from this mechanical power; and the electromagnetic energy that governs the rotation of the glide wheel. Energy produced by the glide wheel powers a control circuit and a tiny, ultra-low consumption (~25 nanoWatts) quartz crystal oscillator, which in turn regulates the electro-mechanical braking of the glide wheel. The glide wheel's speed is sampled 8 times per second (each time it makes a complete revolution around the regulator), and compared with the reference quartz signal by the control circuit. A variable braking force is continuously applied to regulate the glide wheel's frequency. The movement never stops as in a traditional escapement; it is slowed to the proper speed by the brake. The result is a watch with hands that glide instead of ticking, as in a conventional mechanical or quartz watch. The accuracy of this watch movement is guaranteed to be within one second per day, but watch owners commonly report an accuracy of one to two seconds per week. Seiko developed a special alloy called "Spron510" for the mainspring, increasing its capacity to store 72 hours' worth of power, instead of the 40 hours stored in an average mainspring.

Seiko NPC Corporation develops products that employ analog and digital technologies, for applications in mobile devices, digital consumer electronics, and intelligent home appliances. Its quartz crystal oscillator ICs, which have the top share in the global market, are key components in the reference clock signals which control various electronic devices.[9]

Seiko began selling imported eyeglass frames in Japan in 1921, and eventually developed a full line of lenses and optical products. In 1964, it established Japan's first full-scale laboratory system, and introduced Japan's first plastic optical lenses in 1975. Seiko Optical Products is in charge of the planning, marketing, sales, and service of Seiko optical lenses and frames, and eyeglass-related products including frames and sunglasses under a variety of licensed brands. 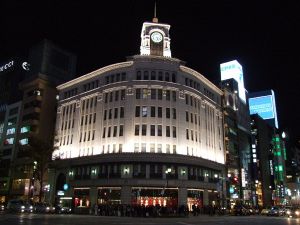 Wako Co. Ltd., an upscale specialty retailer, is a landmark in Ginza, and sells a wide range of sophisticated products, including watches, jewelry, men's and women's clothing, interior home decor, arts and crafts, eyeglasses, and foodstuffs.[10]

Seiko has been the official timer of many major sporting events:

Seiko is also named as the official timekeeper of the Gran Turismo racing game series, published by Sony.