In Christianity, Sabellianism is the belief that God the Father, God the Son and the Holy Spirit are three modes or aspects of God. Once popular but later declared heretical, Sabellianism and similar theologies developed out of the earlier teaching know as Modalistic Monarchianism, with which it is often identified. Its proponent, Sabellius, lived in the early third century C.E. and was probably a Roman presbyter.

Sabellianism differed from classical trinitarianism by insisting that the three persons of the Godhead did not constitute permanent distinctions but functioned instead as modes of God's being and activity. More particularly, the God the Father was active in the principle of creation, God the Son in the act of redemption, and God the Holy Spirit in process of sanctification.

Sabellianism's most outspoken critic was Hippolytus of Rome, who accused Pope Zephyrinus for not taking a stand against the "heresy" and later became an antipope rather than submit to Zephyrinius' protege and successor Callixtus I. Tertullian indicates that Sabellian concepts were prevalent among the rank and file of Christian believers of the time.

Although Callixtus eventually condemned the teaching, it became popular among the African churches in the mid-third century, where it was opposed by Bishop Dionysius of Alexandria. The doctrine continued to play a role during the Arian controversy and persisted in some parts until at least the sixth century, when Sabellian baptisms not performed in the name of the Trinity were declared invalid.

During the Reformation, the Spanish theologian Michael Servetus, was accused of Sabellianism, as was the great eighteenth-century philosopher and mystic Emanuel Swedenborg.

During the development of trinitarian theology, it was often proposed that the Christian God had three "faces" or "masks" (Grk. prosopa). The questions thus arose, is this threeness a matter of essence or perception? Where the three "persons" of the Godhead permanent distinctions, or modes of God's activity?

The doctrine of Sabellianianism did not actually begin with Sabellius, but with the earlier Monarchianism which emphasized the oneness of God over the the threeness of the Trinity. A certain Noetus of Smyrna was one of the first known to have taught this doctrine. Because of his insistence on denying permanent distinctions within the Godhead, he was accused by the elders of his church of teaching that "the Father suffered" (and died on the cross). Noetus denied that this was his teaching, and it is likely that his opponents were putting words in his mouth which they believed were the logical consequences of his notion of the Trinity. However, after gaining disciples, he was later interrogated again and expelled from the Church. Noetus died soon after, and did not receive Christian burial.

His pupil, Epigonus, came to Rome. According to Hippolytus (Philos. 9:7), Cleomenes, a follower of Epigonus, was allowed by Pope Zephyrinus to establish a school, which flourished with the pope's approval and that of his deacon and successor Callixtus I, a fact that led Hippoltyus himself to form a schism and become an antipope rather that submit to Callixtus' leadership. 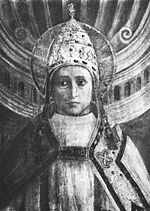 Pope Zephyrinus was accused by Hippolytus of Rome of tolerating Sabellian-type views.

Sabellius soon became the leader of the Monarchians in Rome, perhaps even before the death of Zephyrinus (c. 218). Sabellius or his followers may have considerably amplified the original Noetianism, although we cannot say for certain since their writings are now lost. He is accused by Epiphanius of having founded his views on the Gospel of the Egyptians, (not to be confused with the Gnostic Coptic Gospel of the Egyptians). Hippolytus indicates that he hoped to convert Sabellius to his own views, and attributed his failure in this to the influence of Callixtus. Later, around 220, Callixtus excommunicated Sabellius ("fearing me," says Hippolytus). However, Hippolytus accuses Callixtus of inventing a new heresy by combining the views of Theodotus and those of Sabellius, a view which is unlikely a sin, Callixtus actually excommunicated them both.

Tertullian suggests that the majority of believers at that time favored the Sabellian view of the oneness of God: "The simple," he says, "who always constitute the majority of believers, are startled at the dispensation (of the Three in One), on the ground that their very rule of faith withdraws them from the world's plurality of gods to the one only true God..."[1]

Tertullian labeled the Sabellian heresy "Patripassianism," from the Latin words pater for "father," and passus from the verb "to suffer." This goes back to the accusation that its doctrine led to the conclusion that God the Father suffered on the Cross. The term was coined by Tertullian in his work Adversus Praxeas (chapter 1), in which he accused a certain Praxeas of the dual sins of persecuting Montanism and preaching Sabellianism: "Praxeas did a twofold service for the Devil at Rome: he drove away prophecy [meaning Montanism] and he brought in heresy [meaning Sabellianism]; he put to flight the Paraclete [Holy Spirit] and he crucified the Father."

Sabellius was apparently still in Rome when Hippolytus wrote his Philosophumena (between 230 and 235), and it may be presumed that his ideas still had a following. A number of Montanists, led by Aeschines, were Monarchians, against whom Tertullian, himself a Montanist, had occasion to write.

It is important to note that the only sources for our understanding of Sabellianism are its detractors. These sometimes contradict each other on what precisely Sabellius' doctrine was, beyond what has been outlined already, and scholars today are not in agreement as to what exactly Sabellius himself taught.[2]

In any case, Sabellianism also became an issue during the debates over heretical baptism. On this issue the Roman Catholic Church came to teach that baptism by ordained priests in the name of the Father, Son and Holy Spirit was valid, even if the priest himself was a heretic. However, in the case of certain Sabellians who were baptized in one name only, the baptism would have to be repeated.

The issue came up in Africa in the mid-second century, where Bishop Dionysius of Alexandria (c. 200-265 C.E.) wrote: "Those baptized in the name of three persons... though baptized by heretics... shall not be re-baptized. But those converted from other heresies shall be perfected by the baptism of the Holy Church."

Shortly after this Pope Dionysius (of Rome) called a synod there about 260 to attempt to settle the matter of Sabellianism. The pope issued, in his own name and that of the council, a doctrinal letter stating in part: "Sabellius... blasphemes in saying that the Son Himself is the Father and vice versa." (Pope Dionysius c. 264)

Beryllus, Bishop of Bostra, is vaguely said by Eusebius (H. E., 6:33) to have taught that the Savior had no distinct pre-existence before the Incarnation, and had no divinity of his own, but that the divinity of the Father dwelt in him. Origen disputed with Beryllus in a council and convinced him of his error, and the minutes of the debate were known to Eusebius.

Sabellianism by no means disappeared as a result of these decisions, however, and was still much in evidence in the fourth century. During the Arian controversy, supporters of Arian theology often accused those who insisted that Christ and the Father were of the "same substance" of Sabellianism. Bishop Marcellus of Ancyra, in opposition to Arius, indeed developed a Monarchianism of his own, which was carried further by his disciple, Photinus.

The doctrine was also still alive in the late fourth century at Neocaesarea, where it was attacked by Basil the Great. Epiphanius (Haeres 62) about 375 C.E. notes that the adherents of Sabellius were still to be found in great numbers, both in Mesopotamia and at Rome. Moreover, so-called "Monarchian Prologues" to the Gospels were found in most old manuscripts of the Vulgate version, possibly the work of Priscillian (d. 385), who was the first person in the history of Christianity to be executed for heresy.

The Second Ecumenical Council of Constantinople in 533 C.E. declared the baptism of Sabellius to be invalid, which indicates that Sabellianism was still extant at that time as well.

Both Michael Servetus and Emanuel Swedenborg have been interpreted as being proponents of Sabellian modalism.