Psittacosis, or parrot fever, is an infectious disease caused by the bacterium Chlamydophila psittaci (formerly Chlamydia psittaci) that occurs naturally in many birds and is communicable to human beings. It is also known as ornithosis, chlamydiosis, and parrot disease. It is referred to as avian psittacosis or avian chlamydiosis when it infects birds.

Parrot fever is rare in humans but is contracted particularly from pet parrots, such as macaws, cockatiels, and budgerigars. However, it is also transmitted from pigeons, sparrows, ducks, hens, sea gulls, and many other species of bird. The incidence of infection in canaries and finches is believed to be lower than in psittacine birds (order Psittaciformes). Psittacosis can be transmitted person to person, but it is rare.

Human psittacosis may yield such symptoms as fever, headaches, cough, tiredness, and loss of appetite, but in severe cases can result in pneumonia. While fatalities in known cases are rare, they can occur.

Psittacosis is a largely preventable disease through proper care of birds and good personal hygiene. Improving the care of the bird cages of pet birds, treating ill birds, showing attentiveness to disease in flocks of pigeons, regulating bird importation, and improving the standards of cleanliness in poultry processing plants are means that can reduce incidences.

Chlamydophila psittaci is a small bacterium (0.5 micrometers) that undergoes several transformations during its life cycle. It exists as an elementary body (EB) in between hosts. The EB is not biologically active but is resistant to environmental stresses and can survive outside of a host. The EB travels from an infected bird to the lungs of a non-infected bird or person in small droplets and is responsible for infection.

Once in the lungs, the EB is taken up by cells in a pouch called an endosome, by a process called phagocytosis. However, the EB is not destroyed by fusion with lysosomes as is typical for phagocytosed material. Instead, it transforms into a reticulate body and begins to replicate within the endosome. The reticulate bodies must utilize some of the host's cellular machinery to complete its replication. The reticulate bodies then convert back to elementary bodies and are released back into the lung, often after causing the death of the host cell. The EBs are thereafter able to infect new cells, either in the same organism or in a new host.

Thus, the life cycle of C. psittaci is divided between the elementary body, which is able to infect new hosts but can not replicate, and the reticulate body, which replicates but is not able to cause new infection.

The various C. psittaci strains are similar in virulence, grow readily in cell culture, have 16S-rRNA genes that differ by less than 0.8 percent, and belong to eight known serovars. All should be considered as readily transmissible to humans.

C. psittaci serovar A is endemic among psittacine birds and has caused sporadic zoonotic disease in humans, other mammals, and tortoises. Serovar B is endemic among pigeons, has been isolated from turkeys, and has also been identified as the cause of abortion in a dairy herd. Serovars C and D are occupational hazards for slaughterhouse workers and for people in contact with birds. Serovar E isolates (known as Cal-10, MP or MN) have been obtained from a variety of avian hosts worldwide and, although they were associated with the 1920s–1930s outbreak in humans, a specific reservoir for serovar E has not been identified. The M56 and WC serovars were isolated during outbreaks in mammals. 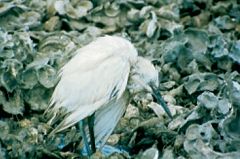 An immature blue heron with psittacosis

Birds are excellent, highly mobile vectors for the distribution of chlamydial infection because they feed on, and have access to, the detritus of infected animals of all sorts. Infected birds shed the bacteria through feces and nasal discharges, which can remain infectious for several months. Many strains remain quiescent in birds until activated under stress.

Infection is usually via the droppings of another infected bird, though it can also be transmitted via feathers and eggs (Owen 1997), with the bacteria typically either inhaled or ingested (Pesek 1998).

Initial diagnosis may be via symptoms, but is usually confirmed via an antigen and antibody test. A polymerase chain reaction (PCR) test is also available. Although any of these tests can confirm psittacosis, false negatives are possible and so a combination of tests is recommended before giving the bird a clean bill of health (Pesek 1998).

C. psittaci strains in birds infect mucosal epithelial cells and macrophages of the respiratory tract. Septicaemia eventually develops and the bacteria become localized in epithelial cells and macrophages of most organs, conjunctiva, and gastrointestinal tract. Stress will commonly trigger onset of severe symptoms, resulting in rapid deterioration and death.

Treatment is usually via antibiotics, such as doxycycline or tetracycline, and can be administered via drops in the water, or injections (Owen 1997). Many strains of C. psittaci are susceptible to bacteriophage.

The most common carriers are pet birds in the parrot family, including parrots, parakeets, macaws, and cockatiels (Longe 2006). However, other birds, such as pigeons, doves, and poultry (chickens, turkeys) can carry the disease. C. psittaci can be spread from the birds to humans through exposure to the feces of the birds, including inhaling dust from the dried bird droppings, or by handling infected birds (Longe 2005).

Humans can also spread the disease by person-to-person contact, such as by cough droplets or sputum, although this is rare (Longe 2005).

In humans, after an incubation period of 5-14 days, the symptoms of the disease appear and range from unapparent illness to systemic illness with severe pneumonia. It presents chiefly as an atypical pneumonia.

In the first week of psittacosis, the symptoms mimic typhoid: Prostrating high fevers, arthralgias, diarrhea, conjunctivitis, epistaxis, and leukopenia. Rose spots can appear and these are called Horder's spots. Splenomegaly is frequent toward the end of first week. Diagnosis can be suspected in case of respiratory infection associated with splenomegaly and/or epistaxis. Headache can be so severe that it suggests meningitis and some nuchal rigidity is not unusual. Towards the end of first week, stupor or even coma can result from severe cases.

Diagnosis involves microbiological cultures from respiratory secretions of patients, or serologically, with a fourfold or greater increase in antibody titers against C. psittaci in blood samples, combined with the probable course of the disease. Typical inclusions called Leventhal-Colle-Lillie bodies can be seen within macrophages in BAL fluid. Culture of Chlamydia psittaci is hazardous and should only be carried out in biosafety laboratories.

Longe (2005) states that only 100 to 200 cases of parrot fever are reported each year in the United States. Since the symptoms can be confused with influenza or pneumonia, many more cases may occur that are not correctly diagnosed or reported.

Bird owners, pet shop employees, and veterinarians are at greatest risk of the infection. Some outbreaks of psittacosis in poultry processing plants have been reported.

The infection is treated with antibiotics. Tetracyclines and chloramphenicol are the drugs of choice for treating patients with psittacosis. It responds sluggishly to antibiotics of the tetracycline family (Breslow 2002).

Most persons respond to oral therapy (100 mg of doxycycline administered twice a day, 500 mg of tetracycline hydrochloride administered four times a day), or 500 mg of chloramphenicol palmitate orally every 6 hours. For initial treatment of severely ill patients, doxycycline hyclate may be administered intravenously at a dosage of 4.4 mg/kg (2 mg/lb) body weight per day divided into two infusions per day (up to 100 mg per dose). In past years, tetracycline hydrochloride has been administered to patients intravenously (10-15 mg/kg body weight per day divided into four doses per day).

Remission of symptoms usually is evident within 48-72 hours. However, relapse can occur, and treatment must continue for at least 10-14 days after fever abates.

Although its in vivo efficacy has not been determined, erythromycin probably is the best alternative agent for persons for whom tetracycline is contraindicated (for example, children aged less than 9 years and pregnant women).

Prognosis for recovery is excellent with antibiotic treatment, with a recovery rate of more than 99 percent of those patients diagnosed with parrot fever (Breslow 2002). However, it can be fatal to the elderly, untreated individuals, and persons with weak immune systems (Breslow 2002).

Retrieved from https://www.newworldencyclopedia.org/p/index.php?title=Psittacosis&oldid=682517
Categories:
Hidden category:
This page was last edited on 2 April 2008, at 14:50.
Content is available under Creative Commons Attribution/Share-Alike License; additional terms may apply. See Terms of Use for details.