Pope Saint Caius, or Gaius, was the bishop of Rome from December 17, 283 to April 22, 296. Christian tradition makes him a native of Dalmatia and a member of a noble family related to the Emperor Diocletian. However, his history is clouded by later legend which associates him anachronistically with Saint Susanna and Saint Sebastian, who are said to have died during the persecutions of Diocletian, which took place after Caius' papacy had ended.

Little other information on Caius is available except that given by the Liber Pontificalis, which is not considered historically reliable. According to legend, Caius baptized the men and women who had been converted by Saint Tiburtius and Saint Castulus. He is also thought to have been the Caius who donated a house for the church's use in Rome, which was later turned into the historic Church of Santa Susanna, which stands today at the site.

His legend states that Caius took refuge in the catacombs of Rome and died a martyr. However, as his episcopacy dates from a period of peace with the Roman state, this report is generally dismissed by modern scholars. The Catholic Church today recognizes him as a "confessor" but not as a martyr. His feast day is marked on April 22 together with that of Pope Saint Soter. 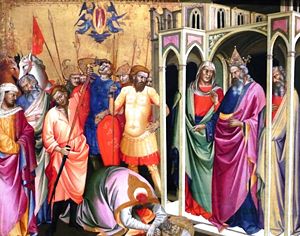 The martyrdom of Pope Caius, shown beheaded, by Lorenzo Monaco. Today, the Catholic Church lists Caius as a confessor, but not a martyr.

Caius was said to have been born in the Dalmatian city of Salona, today known as Solin near Split. He was the son of a man who was also named Caius. According to a sixth century account, two brothers named Caius and Gabinus, prominent and wealthy members of the Roman church, established a Christian place of worship in their house on the site of the later Church of Santa Susanna. It is traditionally believed that this Caius was the future pope. As Gabinus is also the name given to the father of Saint Susanna, Pope Caius came to be seen as the uncle of Susanna. However, other accounts indicate that Caius, the uncle of Susanna, was the Roman prefect (governor) of Rome at the time.

During Caius' pontificate, new churches were built and the Christian cemeteries were expanded. These catacombs were used for burials and the memorial services, and also for celebrations of the anniversaries of Christian martyrs. Because Roman law forbade cemeteries within the city limits, they were built along Roman roads on the outskirts of Rome, like the Via Appia, the Via Ostiense, and, the Via Tiburtina.

Theologically, during Caius' reign, the Novatianist schism continued to challenge the Catholic Church with its teaching that Christians must be willing to hold to their faith at the risk of death and the corollary notion that the sin of apostasy can only be absolved by God and not the church. Gnostic teachings, some centering on Jesus as the divine messenger sent to enlighten mankind, also competed with Christianity for the spiritual loyalty of the residents of Rome. The Manicheans in particular had developed a presence in the capital.

Diocletian took up the office of emperor in 284, near the beginning of Caius' episcopacy. Imperial policy under the new emperor began to emphasize the imperial cult and thus threaten the toleration shown to the Christians since the edict of Emperor Gallienus in 260. However, the tradition that Caius conducted much of his papacy while in hiding in the catacombs is almost certainly a legend, although Christians certainly used the catacombs as a place of worship and to venerate the saints and martyrs entombed there. Nevertheless, the actual persecution of Christians under Diocletian does not seem to have begun yet in Caius' time.

The Liber Pontificalis claims that, as pope, Cauis decreed that before someone could assume the position of bishop, he must first be porter, lector, exorcist, acolyte, subdeacon, deacon, and priest. He is also said to have divided the districts of Rome among the deacons. Both claims, however, are generally viewed as historically unreliable. 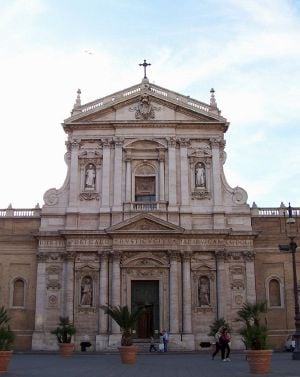 Site of the current Santa Susana in Rome, where Caius may have established an early Christian house-church

Caius is mentioned in the fourth century Depositio Episcoporum, in which he is listed as a Roman bishop but not a martyr. His tomb, with the original epitaph, was discovered in modern times in the Catacombs of Callixtus. Also discovered was his signet ring.

In 1631, his supposed residence in Rome was turned into a church. However, it was demolished in 1880, to make room for the Ministry of War, on the Via XX Settembre, and his relics were transferred to the chapel of the Barberini family.

The site of the house-church thought to have been established by Caius and Gabinus, however, is still home to the Church of Santa Susanna. It is first mentioned in this historical sources in connection with a Roman synod of 499. Traditionally, the structure is believed to have become a church devoted solely to worship around 330, under Constantine I, when numerous large house-churches came to be adapted for strictly liturgical use. The basilica was T-shaped with a central nave with twelve columns on each side, flanked by side aisles. All that is left of the earlier structure after the late sixteenth-century rebuilding are the two side chapels of the basilica church.

From the records of a Roman synod of 565, the church appears under the titulus church of Susanna. Pope Sergius I renovated the church at the end of the seventh century. Pope Leo III, the fourth pope who had been pastor of this church, rebuilt it from the ground in 796, adding the great apse and conserving the relics of the saints in the crypt. A vast mosaic of Christ flanked by Leo and the Emperor Charlemagne on one side and Saints Susanna and Felicity on the other was so badly damaged in the twelfth century by an earthquake that the interior was plastered over in a complete renovation that spanned the years 1585–1602, during which time frescoes were added by Cesare Nebbia (1536–1614).

The present church of Santa Susanna was the first independent commission in Rome for famed architect Carlo Maderno. In 1603, Maderno completed the façade, a highly influential early Baroque design. The dynamic rhythm of columns and pilasters, crowding centrally, and the protrusion and increased central decoration add further complexity to the structure.

Saint Caius is portrayed in art wearing the papal tiara. He is venerated in Dalmatia and Venice. In Florence, the Church of San Gaggio on the via Senese was dedicated to Pope Saint Caius. However, in 2003, plans were put into effect to turn it into residential council housing.

Saint Caius's feast day is on April 22, commemorated together with that of Pope Saint Soter. They were celebrated jointly in the Tridentine Calendar and in the successive versions of the General Roman Calendar until that of 1969, since then they are omitted. However, both popes are mentioned under April 22 in the Roman Martyrology, the official list of recognized saints. The entry for Saint Caius is as follows: "At Rome, in the cemetery of Callistus on the Via Appia, the burial of Saint Caius, Pope, who, fleeing from the persecution of Diocletian, died as a confessor of the faith."