Pope Saint Sixtus I was the bishop of Rome from about 117 or 119 C.E. to 126 or 128 C.E., following Pope Alexander I and succeeded by Pope Telesphorus. The spelling Xystus is also used for the first three popes named Sixtus.

Like most of the very early popes, very little is known about Sixtus. Several sources call him a martyr. However, this is considered unproved, and the "Xystus" who is commemorated in the Catholic Canon of the Mass is Sixtus II, not Sixtus I.

Sixtus I is credited as having instituted several Roman Catholic liturgical and administrative traditions, but historians believe that these were attributed to him by later writers who were interested in bolstering the papacy's claims to ancient supremacy. Like most of his predecessors, Sixtus I was believed to be buried near Saint Peter's grave in the Vatican, although there are differing traditions concerning where his body lies today. His feast is celebrated on April 6.

Sixtus was reportedly a Roman by birth, and his father's name is given as Pastor. Other than that, nothing is known about his background. The Liber Pontificalis credits him with instituting the following three ordinances:

However, most historians today dismiss these claims as a later invention, for the authors of the Liber Pontificalis dutifully ascribe to each pope one or more such decrees in accord with the view of Roman church tradition stemming from an unbroken chain of apostolic authority going back to the first "pope," Saint Peter. Similar skepticism must be applied to the claim that Sixtus appointed exactly 11 priests, four deacons, and four bishops.

Regarding the dates of Sixtus I, according to the Liberian Catalogue of popes, he ruled the Church during the reign of Hadrian "a consulatu Negro et Aproniani usque Vero III et Ambibulo," that is, from 117 to 126. The fourth century church historian Eusebius, however, states in his Chronicon that Sixtus I was pope from 114 to 124, while his Historia Ecclesiastica, using a different list, claims that Sixtus' rule was from 114 to 128. 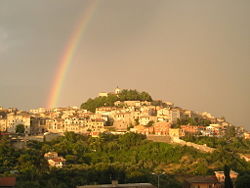 The town of Altari, where Sixtus I is the patron saint

The Felician Catalogue of popes, as well as the Liber Pontificalis and various martyrologies, tells us that Sixtus I was a martyr, though no details are provided. This gives him a somewhat more credible claim to this title than several earlier popes whom the Liber Pontificalis calls martyrs. However, Irenaeus of Lyons, writing in the second century, says nothing of his martyrdom. His successor, Telesphorus, is the first bishop of Rome after Saint Peter whom Irenaeus designates a martyr.

Sixtus was reportedly buried in the Vatican, beside the tomb of Saint Peter. The Liber Pontificalis gives his date of burial as April 3.

The relics of Saint Sixtus are said to have been transferred to Alatri in 1132, although some contend that they are still in the Vatican Basilica. The eighteenth century English Roman Catholic hagiographer Alban Butler (Lives of the Saints, April 6) stated that Pope Clement X gave some of his relics to Cardinal Jean François Paul de Gondi, who placed them in the Abbey of St. Michael in Lorraine in the seventeenth century. The Xystus who is commemorated in the Catholic Canon of the Mass is Xystus II, not Xystus I.