Pope Saint Zosimus was pope from March 18, 417 to December 26, 418. Also known as Zozimus, he succeeded Innocent I, and was followed by Boniface I. Although his reign was brief, it was turbulent and left a powerful impact on the papacy.

Zosimus is best known for his role in the Pelagian controversy. He at first pronounced the Pelagian teacher Caelestius to be orthodox and later declared him and Pelagius both to be heretical. Critics of the doctrine of papal infallibility cite this as evidence that this pope erred in his official theological judgment while conservative Catholics insist that Zosimus did not make this pronouncement ex cathedra.

Zosimus also took a deciding part in a protracted dispute in Gaul concerning the jurisdiction of the See of Arles over that of Vienne, giving decisions in favor of Arles, but not succeeding in settling the controversy. He later misstepped in using a supposed decision of the Council of Nicaea to bolster Rome's prerogatives, when in fact no such rule was passed at Nicaea. At his death, the Roman curia was divided, resulting in dual elections and rival contenders as his successor as Bishop of Rome.

Few sources commend his papacy, but like all early popes, Zosimus is considered as a saint in the Roman Catholic Church, as well as in the Eastern Orthodox Church. Zosimus was buried in the Basilica of Saint Lawrence Outside the Walls in Rome. He is not to be confused with his contemporary of the same name, who was a historian in Constantinople.

According to the Liber Pontificalis Zosimus was a Greek and his father's name was Abram. Church historian Adolf Harnack deduced from this name that the family was of Jewish origin, but this evidence is not regarded as conclusive. Nothing more is known of the life of Zosimus before his elevation to the throne of Saint Peter in Rome.

Zosimus' predecessor, Innocent I had engaged the Roman church in a major controversy in the East over the ouster of John Chrysostom as bishop of Constantinople and had also condemned the optimistic theologian Pelagius as a heretic for teaching a doctrine of moral perfectionism and denying original sin.

Zosimus' consecration as bishop of Rome took place on March 18, 417. The festival was notably attended by Bishop Patroclus of Arles, whose predecessor, Bishop Heros, had been forcibly removed by the Roman general Constantine. In the year 400, Arles had replaced Trier as the residence of the chief government official of the civil diocese of Gaul. Patroclus, who enjoyed the support of the commander Constantine, used this opportunity to procure for himself a position of supremacy over the other bishops of the region. A key part of his strategy involved winning over Zosimus to his cause, apparently by promising to act as the pope's agent in Gaul.

Patroclus quickly gained the confidence of the new pope, and as early as March 22, he received a papal letter which conferred upon him the rights of a metropolitan bishop over the other major bishoprics of the region. In addition, Patroclus was made, in effect, the papal vicar for the whole of Gaul. No Gallic cleric was permitted even to journey to Rome without bringing with him a certificate of identity from Patroclus.

The bishops of Vienne, Narbonne, and Marseilles regarded this elevation of the see of Arles as an serious infringement of their rights. They raised their objections in several letters to Zosimus, who responded by demanding obedience and threatening the bishops with excommunication. The dispute, however, was not settled until the pontificate of Pope Leo I, several decades later.

Not long after the election of Zosimus, Caelestius, a major proponent of Pelagianism who had been condemned by Innocent I, came to Rome to justify himself before the new pope, having been expelled from Constantinople.

In the summer of 417, Zosimus held a council of the Roman clergy in the Basilica of St. Clement, before which Caelestius appeared. The propositions drawn up by the deacon Paulinus of Milan, on account of which Caelestius had been condemned at Carthage in 411, were laid before him. Caelestius refused to distance himself these propositions, but held they were not heretical. At the same time, he insisted that he accepted the doctrine expounded in the letters of Pope Innocent on the subject. He also declared his own formal confession of faith, which was approved by the council as orthodox. The pope declared that it was not certain that Caelestius had ever maintained the doctrine rejected by Innocent and seemed convinced that the basic premises of Pelagianism had been misrepresented by its adversaries. 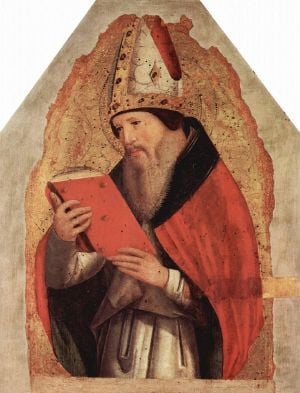 Augustine of Hippo was the primary intellectual opponent of Pelagius.

Zosimus concluded that the actions of several previous African synods against Pelagianism, not to mention the opinion of Augustine of Hippo condemning Pelagius as a heretic, were too hasty and too harsh. He wrote at once in this sense to the bishops of the African provinces, and called upon those who had anything to bring against Caelestius to appear at Rome within two months.

Soon after this, Zosimus received Pelagius's own confession of faith, together with a new treatise by him concerning the role of free will in salvation, which had been intended for Innocent I but was received after his death. The pope now held a new synod of the Roman clergy, before which both these writings were read. The assembly found nothing objectionable in Pelagius' views and held his statements to be orthodox. Zosimus again wrote to the African bishops defending Pelagius and reproving his accusers.

In response, Archbishop Aurelius of Carthage quickly called a synod, which sent a letter to Zosimus in which it was asserted that the pope had been deceived by the "heretics." In his answer, Zosimus admitted that he had settled nothing definitely, and declared his desire to continue consulting the African bishops. A new synodal letter of the African council of May 1, 418 began to persuade the pope that perhaps Pelagius was a heretic after all. Meanwhile the western emperor Honorius had decided Pelagianism was a political threat, and outlawed it. These factors were enough for Zosimus, who now recognized the "true" character of Pelagius' teaching. He thus issued his Tractoria, in which Pelagianism and its authors were finally condemned.

Jurisdictional and other issues

Shortly after this, Zosimus became involved in a dispute with the African bishops in regard to the right of appeal to the Roman see by clerics who had been condemned by their local bishops. When the priest Apiarius of Sicca was excommunicated by his bishop on account of his alleged crimes, he appealed directly to the pope, without regard to the regular course of appeal in Africa. The pope accepted the appeal and sent out his legates to Africa to investigate the matter.

Zosimus based his action on a reputed canon (decision) of the First Council of Nicaea, an ecumenical council binding on the whole church. Embarrassingly, it was in reality a canon of the more localized Council of Sardica. This mistake resulted from the fact that in the Roman manuscripts, the canons of Sardica followed those of Nicaea immediately, without an independent title. The African manuscripts contained only the canons of Nicaea, so that the canon appealed to by Zosimus was, of course, not contained in the African copies of the Nicene canons. Thus, a serious disagreement arose over the appeal, which continued after the death of Zosimus.

Other letters of Zosimus which have survived include messages sent to the bishops of the Byzantine province in Africa in regard to a deposed bishop, and to the bishops of Gaul and Spain in respect to the heresy of Priscillianism and the ordination to various grades of the clergy. The Liber Pontificalis attributes to Zosimus a decree on the wearing of the maniple, an embroidered band of silk or similar fabric which hangs from the left arm, by deacons. It also credits him with other decrees on the dedication of Easter candles in the country parishes and forbidding clerics to visit taverns.

Zosimus was buried in the Basilica of Saint Lawrence Outside the Walls.

Pope Zosimus lacked the time to get his papacy back on an even keel after several early missteps. As a result, the Roman clergy was badly divided at the time of this death, and the church faced the disturbing spectacle of double papal elections. Just after Zosimus's funeral, on December 27, 418, a faction of the Roman clergy consisting principally of deacons entered the Lateran Basilica and chose Archdeacon Eulalius as pope. The higher clergy elected Boniface I as their candidate the next day. Before the matter had been ultimately resolved in Boniface's favor, both men had been banished from Rome and imperial troops had to be called in to keep order.

Zosiumus' short reign as pope has become a prime historical example for those who deny the doctrine of papal infallibility. He was forced to change course dramatically in the Pelagian conflict, and he also made the embarrassing mistake of citing the precedent from the Council of Nicaea in favor of local excommunicated clergy appealing to Rome, when in fact no such rule had been declared by that ecumenical council. While Catholic scholars have spent much ink arguing that Zosimus was not speaking ex cathedra in these matters, there can be little doubt that his papacy proved that the "rock" upon which Saint Peter's throne sits is sometimes less than stable.