Saint Sebastian (traditionally died January 20, 287) was a Christian saint and martyr, who is said to have died during the Diocletian persecution in the late 3rd century. Though Sebastian's characterization is marred by a notable paucity of biographical details, a fanciful version of his Acta was composed in the fifth century (and falsely attributed to Saint Ambrose). In art and literature, he is commonly depicted as a beautiful, hairless youth tied to a post and pierced with arrows.

Though Sebastian's name is the subject of an elaborate etymology in Legenda Aurea, it may actually derive from the cognomen "Sebastianus." Sebaste was a common toponym in Antiquity, derived from Sebastia, "a city in Pontus that was named for Augustus Caesar, first Roman emperor."[2]

As mentioned above, the definitive facts concerning the life of Sebastian are decidedly scantly. Indeed, little is known of the martyr save the date of his death (in 287 C.E.) and the fact that he was buried along the Appian Way, as recorded in the Depositio Martyrum (354 C.E.).[3] [4] Some of these details, the most important of which was the establishment of a genealogical connection with the city of Milan, were first elaborated by Ambrose of Milan (died 397), in his sermon (number XX) on the 118th Psalm. In this discourse, St. Ambrose states that Sebastian came from Milan and that a local cult to the martyr was already popular in the fourth century.[5]

According to the martyr's fifth-century Acta[6] (still attributed to Ambrose by the seventeenth-century hagiographer Jean Bolland)[7] and the briefer account in Legenda Aurea, Sebastian was a man of Gaul who was raised and schooled in Milan. His bravery, physical might, and otherwise exceptional character led him to become involved in the Roman military, culminating with his promotion to captain of the Praetorian Guard under Diocletian and Maximian, both of whom were unaware that he was a Christian.[8]

In his military role, Sebastian was known for encouraging and supporting the Christians who were being targeted by the emperor. In one notable account (contained in every extant hagiography), he bolsters the faith of Mark and Marcellian, two Christian prisoners who were awaiting martyrdom. The captain's words of encouragement were sufficient to strengthen the resolve of the two youths, allowing them to ignore the entreaties of friends and family who begged them to forswear Christ and offer token sacrifice. Following his pious speech, Sebastian also cured a woman of her muteness: a miracle that instantly converted seventy-eight witnesses.[9]

On being informed of his captain's pro-Christian advocacy, Diocletian reproached the saint for his supposed betrayal. The furious emperor then "commanded him to be led to the field and there to be bounden to a stake for to be shot at. And the archers shot at him till he was as full of arrows as an urchin [hedgehog] is full of pricks."[10] Their appointed task (apparently) completed, the guardsmen left him there for dead.

Miraculously, the arrows failed to snuff out the life of the saint, and he was nursed back to health by the widow of Saint Castulus. Determined allow his life to serve as a witness to Christ, the convalescent Sebastian encamped upon the steps of a tower, waiting for the train of emperor Diocletian to pass by. When it did, the saint arose and decried his former master, saying "False are the words of thy idol priests, my sovereign, who say that we Christians are adversaries of the state; who cease not to pray for they welfare and that of the realm."[11] When the emperor demanded to know who addressed him in such a disrespectful tone, Sebastian replied: "I am Sebastian, raised as from death to witness against thee for they cruel persecution of the servants of Christ."[12] Though momentarily dumbfounded by the vision, the irascible emperor soon regained the command of his senses and ordered that the saint be beaten to death with cudgels and that his body be discarded in a privy. Fortunately for the memory of the saint, his body was retrieved by Lucina (a Christian widow), who buried it secretly at the site that would later provide the foundation for the saint's basilica.[13] [14][15]

Mortal remains thought to belong to Saint Sebastian are currently housed in a basilica that was built by Pope Damasus I in 367 (Basilica Apostolorum), on the site of the provisional tomb of Saint Peter and Saint Paul.[16] The church, today called San Sebastiano fuori le mura, was rebuilt in the 1610s under the patronage of Scipio Borghese.

Further, relics of the saint are understood to be distributed throughout the Christian world, as cataloged by Baring-Gould:

Relics, at Soissons, the head at Eternach, in Luxembourg, portions at Mantua, at Malaga, Seville, Toulouse, Munich, Paris, Tournai, in the Cathedral; Antwerp, in the church of the Jesuits; and at Brussels, in the Court Chapel.[17]

Sebastian, like Saint George, was one of a class of military martyrs and soldier saints of the Early Christian Church, whose cults originated in the fourth century and culminated at the end of the Middle Ages, in the 14th and 15th centuries, both in the East and the West. Details of their martyrologies may provoke some skepticism among modern readers, but certain consistent patterns emerge that are revealing of Christian attitudes. Such a saint was an athleta Christi, an "athlete of Christ," and a "Guardian of the heavens." In keeping with his supposed military rank, Saint Sebastian was regarded as the patron saint of soldiers (in general), infantrymen (in particular), athletes generally, archers and municipal police officers.[18]

A protector against the devastation of communicable disease, Sebastian is sometimes credited as one of the Fourteen Holy Helpers (a Rhinelandic cult popular from the 14th to 16th centuries C.E.).[21] Two hypotheses exist concerning the relationship between the arrow-ridden martyr and his mytho-hygienic characterization: one syncretistic, the other functional. In the first case, one can draw a parallel between the saint's stalwart stance against the emperor's archers and Apollo, the Greek god whose arrows were thought to deliver pestilence. In this way, the figure of Sebastian can be seen to Christianize a familiar literary trope.[22] The second possibility, thought by many to be more likely, is that miraculous recoveries from plagues (often on a city-wide level) occurred after prayers to the saint. When such stories accumulated, the account of the saint's patronage emerged.[23]

Likely due to the saint's depiction in artwork (described below), many gay Catholics think of Saint Sebastian as their patron and intercessor saint before God.[24] 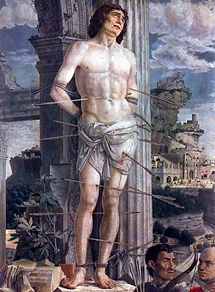 'The Martyrdom of St. Sebastian, by Andrea Mantegna.

The [25]is a mosaic in the Basilica of Sant'Apollinare Nuovo (Ravenna, Italy) dated between 527 and 565. The right lateral wall of the basilica contains large mosaics representing a procession of 26 Martyrs, led by Saint Martin and including Saint Sebastian. The Martyrs are represented in Byzantine style, lacking any individuality, and have all identical expressions. [26] is in a mosaic in the Church of San Pietro in Vincoli (Rome, Italy), which probably belongs to the year 682, shows a grown, bearded man in court dress but contains no trace of an arrow."[27] In general, these early depictions feature the saint as an older, bearded man with a stern, military bearing.[28]

As protector of potential plague victims and soldiers, Sebastian naturally occupied a very important place in the popular medieval mind, and hence was among the most frequently depicted of all saints by Late Gothic and Renaissance artists. Further, the opportunity to show a semi-nude male, often in a contorted pose, also made Sebastian a favorite subject. His shooting with arrows was the subject of the largest engraving by the Master of the Playing Cards in the 1430s, when there were few other current subjects with male nudes other than Christ. Sebastian appears in many other prints and paintings, although this was also due to his popularity with the faithful. Among many others, Sandro Botticelli, Andrea Mantegna, and Perugino all painted Saint Sebastians, and later El Greco, Gerrit van Honthorst and Gian Lorenzo Bernini. [29] These images also featured on the predella of altars, often depicting his arrest, confrontation with the Emperor, and final shooting/beating/beheading. In these depictions, the saint is seen as a figure of boyish, even effeminate, beauty, which led to the emergence of various pseudo-sexualized depictions of the saint: A sexual conter-myth was started, and as visitations of the plague grew fewer and the influence of medieval guilds also declined, the only reverence left to Sebastian became "the compromising, inadmissible patronage of sodomites or homosexuals, seduced by the nudity of an Apollonian ephebe, as glorified by Sodoma."[30] 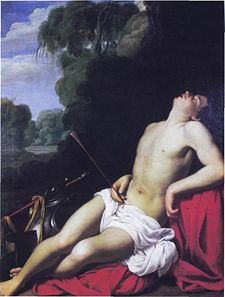