Saint Rose of Lima (April 20, 1586 – August 24, 1617), known as Santa Rosa (de Lima) in Spanish, was the first person born in the Americas to be canonized as a Catholic saint. Born in Lima, Peru, in 1586, she took the name of Rose at her confirmation in 1597. At a young age, she gave her life to prayer and mortification which upset her parents but focused her attention unfailingly on God.

When she read a biography of Saint Catherine of Siena, she was inspired to take that saint as her model. She began by fasting three times a week. She then added secret severe penances, cut off her hair, wore the "hair shirt" on her body and a spiked ring on her head, and even disfigured her face. Many of these acts were done against the wishes of her parents and in spite of the ridicule of her friends. Daily reception of the Eucharist consoled her.

Eventually, she determined to take a vow of virginity and become a nun. This presented still more trials and difficulties to Rose, as once again her parents opposed her, wishing instead that she would marry. She ultimately won their permission, and in her twentieth year, she received the habit of Saint Dominic and upon the permission of her spiritual adviser, moved permanently into a small grotto built in her parent's garden, where she had often spent nights in prayer.

Rose was outspoken against the corruption of Spanish wealth-seekers in the New World, and her sacrifices made a deep impression on the people of Lima. Many miracles followed her death in 1617. She was beatified by Clement IX, in 1667, and canonized in 1671, by Clement X, the first American to be so honored. Her feast day is celebrated on August 23, and she is represented wearing a crown of roses.

Saint Rose was born April 20, 1586, in the city of Lima, the capital of Peru. She received the baptismal name Isabel Flores de Oliva. From a large family, her father, Gaspar Flores, was a Spanish soldier and her mother, Maria de Oliva, had Incan and Spanish blood. She took the name of Rose at her confirmation in 1597. Rose was normally obedient to her parents, but not their wishes which interfered with her spiritual quest.

Rose worked hard, both at her studies and at her domestic work. In emulation of St. Catherine of Siena, whom she admired, she fasted three times a week. When she was complemented by others on account of her beauty, Rose cut off her hair, against the objections of her friends and her family. When her parents censured her for this act, she disfigured her face with pepper and lye.

This caused her parents to deplore her penitential practices more than ever; and she, in turn, began to tell of visions, revelations, visitations, and voices from heaven. Rose endured their disapproval and grew in spiritual fortitude. She spent many hours contemplating the mystery of the Eucharist, which she received daily. Rose then determined to take a vow of virginity, once again in opposition to her parents, who wished her to marry. This reportedly caused her excruciating mental agony and desolation of spirit, motivating her to even more frequent mortifications.

Daily fasting turned to perpetual abstinence from meat. Her days were filled with acts of charity and industry. Rose helped the sick and hungry around her community, bringing them to her home and taking care of them. She sold her fine needlework and grew beautiful flowers, taking them to sell in market to help her family. Her exquisite lace and embroidery helped to support her home, while her nights were devoted to prayer and penance in a little grotto which she had built. She eventually became a recluse, leaving the grotto only for her visits to the Eucharist.

Rose often wore on her head a circlet of silver, studded on the inside with sharp points, in memory of the Lord's crown of thorns. Other forms of penitence which she inflicted on her body were floggings, administered three times daily; the wearing of a hair shirt; and the dragging of a heavy, wooden cross about the garden. She rubbed her lips with gall and often chewed bitter herbs to deaden the sense of taste. Both eating and sleeping were reduced to a minimum. Naturally, her health was affected, but the physical disorders which resulted from this regime—stomach ailments, asthma, rheumatism, and fevers—were suffered uncomplainingly. 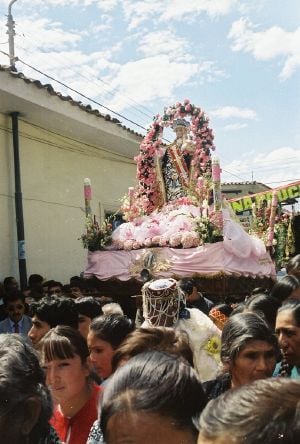 In 1602, the Dominican Order permitted her to enter a Dominican convent, without payment of the usual dowry. She donned the habit and took a vow of perpetual virginity.

In spite of the rigors of her ascetic life, Rose was not wholly detached from happenings around her, and her awareness of the suffering of others often led her to protest against some of the practices of the Spanish overlords. In the New World, the discovery of unbelievable mineral resources was doing little to enrich or ennoble the lives of the Peruvian natives. The gold and silver from this land of El Dorado was being shipped back to strengthen the empire and embellish the palaces and cathedrals of Old Spain; but at its source there was vice, exploitation, and corruption.

The natives were oppressed and impoverished, in spite of the missionaries' efforts to alleviate their miseries and to exercise a restraining hand on the governing class. Rose was cognizant of the evils, and spoke out against them fearlessly.

For 15 years, Rose bore the disapproval and persecution of those close to her, as well as the more severe trial of desolation of soul. In time, an examination by priests and physicians was indicated, and this resulted in the judgment that her experiences were indeed supernatural. Rose's last years were passed in the home of a government official, Don Gonzalo de Massa. During an illness towards the end of her life, she was able to pray, "Lord, increase my sufferings, and with them increase Thy love in my heart." This remarkable woman died on August 25, 1617, at the age of 31.

Not until after her death was it known how widely Rose's influence had extended, and how deeply venerated she was by the common people of Lima. When her body was borne down the street to the cathedral, a great cry of mourning arose from the crowd. For several days it was impossible to perform the ritual of burial on account of the great press of sorrowing citizens around her bier. She was finally laid to rest in the Dominican convent at Lima. Later, when miracles and cures were being attributed to her intervention, the body was transferred to the church of San Domingo. There it reposes today in a special chapel. 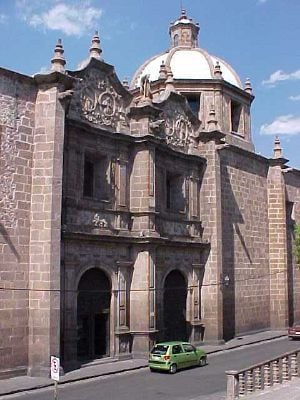 The Temple of Santa Rosa in Morelia, Mexico

Rose was beatified by Pope Clement IX in 1667, and canonized in 1671, by Pope Clement X as the first individual born in the Western Hemisphere to be canonized by the Roman Catholic Church. Her shrine, alongside those of her friends St. Martin de Porres and Alonso Abad, is located inside the convent of Santo Domingo in Lima. Many miracles reportedly followed her death. The numerous places named Santa Rosa in the New World pay homage to this saint, and Pope Benedict XVI has a special devotion to her.

The liturgical feast of Saint Rose was celebrated initially on August 30, because August 24 was the feast of the apostle Bartholomew, but the calendar reform of Vatican II moved her feast day closer to the anniversary of her death. She is now remembered liturgically on August 23, although in Peru and other Latin American countries her feast is kept as a public holiday on the traditional date of August 30.

Saint Rose is the patroness of Lima, of Peru, the Americas, the Philippines, and the city of Sittard in the Netherlands. In addition, she is also the patron saint of the city of Santa Rosa, California, in the United States.

She is depicted wearing a metal-spiked crown, concealed by roses, and an iron chain around her waist.