Parochial school is a term used (particularly in the United States) to describe a school attached to a church parish. Parochial schools teach the same core curriculum as public and non-sectarian private schools, but also include courses on the doctrines of the church and often offer a faith-based interpretation in other subjects. While there are religious schools around the world, and in heavily Catholic European nations (such as Italy, Spain and France) there are schools connected to the Catholic church, parochial schools today are a uniquely American creation that walk a delicate balance of religious instruction and secular education.

While parochial schools have offered a valuable alternative to secularized public schools for many who desire their children to be educated in a God-centered environment, the narrowness of the vision of parochial schools, as evidenced by the intention of many to preserve the Catholic faith and culture in an environment of Protestantism, builds barriers between those of different faiths.

The Catholic parochial school system developed in the early-to-mid-nineteenth century partly in response to what was seen as anti-Catholic bias in American public schools. European immigrants created schools designed to preserve their cultural heritage, including their religious and moral beliefs; these were usually maintained by the local parish.[1] In fact, historically, most American non-public schools have been Catholic schools, many of them elementary schools attached to a local parish church.

Parochial schools were originally designed to maintain the Catholic faith and culture, combating the perceived threat posed by Protestantism. With such tensions are not as acute in America in modern times, parochial schools are still designed to promote and spread the Catholic faith, and at the same time provide a secular education similar, and in some instances superior, to public schools.

The word "parochial" is an adjective which means "of or pertaining to a parish," and comes from the Middle English parochialle.[2] The term "parochial school" specifically refers to schools attached to Roman Catholic parishes or dioceses. It has also been used to include Protestant, Jewish, Muslim and other religious schools, and occasionally as a blanket term for all privately operated schools. In the United Kingdom, the term "faith school" is used for a school that has a particular religious character or has formal links with a religious organization. 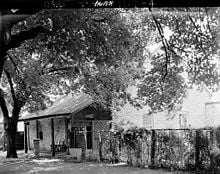 Pratte Warehouse in Ste. Geneviève, Missouri, sometimes called the “First Parochial School.” It was built in 1818 as a fur warehouse and later sold to the Sisters of Loretto for use as a school.

Originally, schools in the western world, and in many other parts of the world, were religious institutions. These early schools were often responsible for training the clergy in religious doctrine. In Europe, the Roman Catholic Church opened some of the earliest schools. Eventually, other studies, such as the Classics, mathematics, rhetoric, logic, natural sciences, art, and other subjects started to be introduced into the curriculum. By the time of the Renaissance, schools had become places for both religious and secular education. 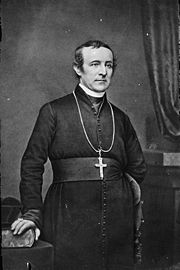 Archbishop John Hughes, one of the proponents the Catholic Churches decision to establish a comprehensive group of private schools

In the United States, the country with the largest number of parochial schools, the Catholic Church established a series of private schools connected to parishes in the late nineteenth century as a way to curtail the growing influence of Protestantism on education and society.[3] At first creating parochial schools presented many challenges; parishes were forced to provide enough money for the proposed schools, but not all parishes, especially those in more rural areas with smaller congregations had the financial capacity to do so; attendance at first was low and sometimes did not justify the cost; and tensions among Protestants and Catholics meant that in predominantly Protestant areas such attempts to were belittled and even occasionally met with violence.[4] But parochial schools persisted, and by the beginning of the twentieth century were increasing their enrollment exponentially. In fact, the beginning half of the twentieth century was perhaps the best in terms of enrollment size and popularity for parochial schools as many new parents, some not even Catholic, saw the educational benefits and advantages that such schools held for their children over public schools.[3]

Enrollment started to decline slightly after the 1960s. Cost of tuition and sometimes defection away from the Catholic church and its dogmas made some parents decide that the improving public schools, which they were already paying for in taxes, would produce a better place for their children's education. The increase in non-Catholic parochial schools also led those who were not Catholic but sent their children to parochial schools because of the quality of education to switch to schools that were linked directly to their own faith. While parochial schools have not regained the same level of enrollment they once held, they are still popular schools found throughout the United States. 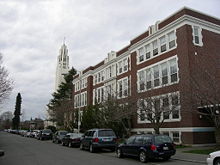 Parochial schools are generally not required by law to operate according to the same standards as a public (government-operated) school; however, the differences of law vary from state to state. Most schools, although not required, do follow and even exceed public school standards, as a way of preparing their students adequately for further education. Parochial schools receive no funding from any level of government and often tuition is charged in order to supplement funding from its parish. The schools are often administered by the local branch of the church. Although most parochial schools may have started with clergy as faculty, the demand for teachers has caused many religious schools to hire non-clergy as teachers and sometimes even administrators.[3] Religious instruction is usually added to the subjects taught in a public school.

Parochial schools are generally smaller than public schools, often having only one teacher and classroom per grade level. Many students attend parochial schools only through the end of the eighth grade, completing their final four years of school in a public high school. Catholic high schools, rather than being attached to a specific parish (whose population would be too small to support it), tend to be administered by local dioceses or by religious orders, and are sometimes attached to Catholic universities.

While not as numerous as Catholic parochial schools, there are a number of private religious schools in the United States, some of which are connected to non-Catholic denominations of Christianity. Private Jewish schools, sometimes referred to as "Complete Schools" are perhaps the most popular type of non-Christian parochial school. Other religious schools include Islamic and Hindu schools. Often times these smaller schools are located in "pocket" communities found in urban areas that have a higher number of immigrant and minority populations. As such, these parochial schools often serve not just as religious schools, but also as places to foster the sense of community and cultural identity. Many immigrants and second generation parents wish for their children to maintain a sense of their cultural identity and find that such schools help to serve this purpose.

Other issues include the type of education offered at parochial schools, particularly when it comes to subjects that may conflict with religious instruction. The most notable is the issue of human evolution which many parochial schools will not teach, substituting religious doctrine or the theory of creationism. While this is more of a controversy in public schools where the separation of church and state is applicable, parochial schools are by definition allowed to refuse to teach anything that is incompatible with their doctrines. Most parents and students understand and except this from such institutions, and sometimes even place their children in these schools for exactly this reason. However, for those families who do not strictly accept all the religious teachings, this issue may make the parochial school appear to be a less attractive option.