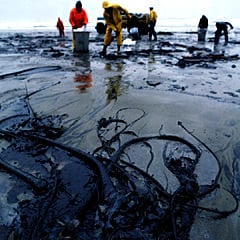 Aftermath of an oil spill.

An oil spill is the unintentional release of a liquid petroleum hydrocarbon into the environment as a result of human activity. Oil can refer to many different materials, including crude oil, refined petroleum products (such as gasoline or diesel fuel) or by-products, ships' bunkers, oily refuse, or oil mixed in waste. Most man-made oil pollution comes from land-based activity, but the term often refers to the release of oil into the ocean or coastal waters. Public attention and subsequent regulation has tended to focus mainly on seagoing oil tankers.[1]

Petroleum-based hydrocarbons can negatively impact marine life and seabirds even at low concentrations. Oil that is denser than water settles on and penetrates the seabed, and it may take months or even years to clean up. Some methods to clean up an oil spill include the use of bioremediation, dispersants, dredging, and skimming.

It should be noted that oil is also released into the environment from natural geologic seeps on the sea floor.[2] 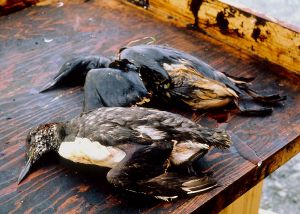 The lighter fractions of oil, such as benzene and toluene, are highly toxic, but they are also volatile and evaporate quickly. Heavier components of crude oil, such as polynuclear aromatic hydrocarbons (PAHs) appear to cause the most damage. Although they are less toxic than the lighter volatiles, they persist in the environment much longer.

A heavy oil spill can also blanket estuaries and shoreline ecosystems, such as salt marshes and tidal pools, preventing gas exchange and blocking light. The oil can mix deeply into pebble, shingle, or sandy beaches, where it may remain for months or even years.

Seabirds are severely affected by spills, as the oil penetrates and opens up the structure of their plumage, reducing the insulating ability of their feathers, making the birds more vulnerable to temperature fluctuations and much less buoyant in the water. The oiled feathers also impairs the birds' ability to fly, making it difficult or impossible to forage and escape from predators. As they attempt to preen, birds typically ingest oil that coats their feathers, causing kidney damage, altered liver function, and digestive tract irritation. The limited foraging ability coupled with the ingestion of oil quickly leads to dehydration and metabolic imbalances. Most birds affected by an oil spill die in the absence of supportive human intervention.

Marine mammals exposed to oil spills are affected in many of the same ways as seabirds. Oil coats the fur of sea otters and seals, reducing the natural insulation ability of their fur, leading to body temperature fluctuations and hypothermia. Ingestion of the oil also causes dehydration, and impaired digestion.

Cleaning up an oil spill

Some equipment used for cleanup:

Some methods used for cleanup:

Estimating the volume of a spill

For an oil spill on water, one can calculate the total volume of oil by measuring the surface area of the spill and the average thickness of the film.[6]

Volunteers cleaning up the aftermath of the Prestige oil spill.

One metric ton of crude oil is roughly equal to 308 US gallons, or 7.33 barrels.