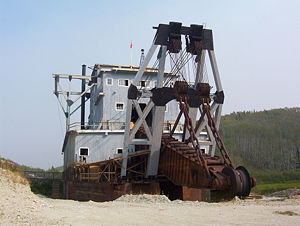 The 'business end' (excavator) of a Yukon dredge.

Dredging is an operation to excavate material from the bottom of a shallow sea or freshwater area, disposing of the material at a different location. The process of dredging may involve scraping or sucking the seabed, and the dredged materials are called "spoils." The machinery used for dredging is called a dredge, and a ship or boat equipped with a dredge is called a dredger or just a dredge (the latter term being American usage).

Dredging may be carried out to create a new harbor or waterway, to maintain navigable waterways or channels, or to make preparations for future docks or bridges. The dredged material may be used to construct new land elsewhere, or for flood or erosion control. Historically, dredging has been used for mining of gold and other valuable substances. Dredging activities may also be conducted to remove trash and debris, and to reclaim areas affected by toxic chemicals and urban runoff. On the downside, however, dredging may adversely affect aquatic ecosystems.

Without the many, almost non-stop dredging operations worldwide, much of the world's commerce would be impaired, often within a few months, because many of the world's goods are transported by ships that need appropriate channels to access harbors and seas. Recreational boating also would be constrained to the smallest vessels. Most marine dredging operations require appropriate licenses from regulatory authorities, and dredging is usually carried out by (or for) harbor companies or corresponding government agencies. 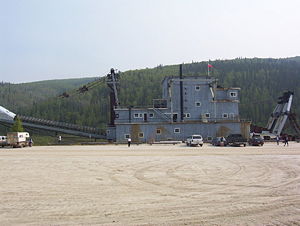 Profile view of above dredge tied up to a quay. The dredged materials are conveyed to the left side into a receiving vessel such as a barge. 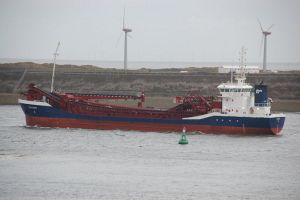 Example of a trailing suction dredger: the Orisant in the port of Ijmuiden, Netherlands.

Suction dredgers operate by sucking the bottom sediments through a long tube, resembling many vacuum cleaners. A plain suction dredger has no tool at the end of the suction pipe to disturb the material on the bottom before it is sucked up. This is often the most commonly used form of dredging.

A trailing suction hopper dredger (TSHD) trails its suction pipe when working, and loads the dredge spoils into one or more hoppers in the vessel. When the hoppers are full, the TSHD sails to a disposal area and either dumps the material through doors in the hull or pumps the material out of the hoppers. Some dredges also self-offload using drag buckets and conveyors.

The suction tube of a cutter-suction dredger (CSD) has a cutter head at the suction inlet, to loosen the earth and transport it to the suction mouth. The cutter can also be used for hard surface materials like gravel or rock. The dredged soil is usually sucked up by a wear-resistant centrifugal pump and discharged through a pipeline or to a barge. In recent years, dredgers with more powerful cutters have been built to excavate harder and harder rock without blasting.

This type of dredger functions like a cutter suction dredger, but the cutting tool is a rotating Archimedean screw set at right angles to the suction pipe.

This dredger uses the Venturi effect of a concentrated high-speed stream of water to pull the nearby water, together with bed material, into a pipe.

An airlift is a type of small suction dredge. It is sometimes used like other dredges. At other times, often an airlift is used handheld underwater by a diver. It works by blowing air into the pipe, and dragging water with it.

A bucket dredger has a bucket dredge, which is a device that picks up sediment by mechanical means, often with many circulating buckets attached to a wheel or chain. Some bucket dredgers and grab dredgers are powerful enough to work through coral reefs to make a shipping channel. 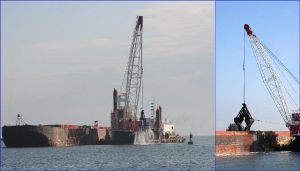 Example of the grab dredging process in Port Canaveral, Florida.

A grab dredger picks up seabed material with a clam shell grab, which hangs from either an onboard crane or a crane ship, or is carried by a hydraulic arm, or is mounted like on a dragline. This technique is often used in excavation of bay mud. Most of these dredges are crane barges with spuds.

A backhoe/dipper dredge has a backhoe similar to that found on some excavators. A crude but usable backhoe dredger can be made by mounting a land-type backhoe excavator on a pontoon. The two largest backhoe dredgers in the world were Tauracavor (Great Lakes), New York (Great Lakes) and Il Principe (Jan De Nul). Both feature a barge-mounted excavator. Small backhoe dredgers can be track mounted and work from the bank of ditches. A backhoe dredger is equipped with half-open shell. The shell is filled moving towards the machine. Usually dredges material is loaded in barges. This machine is mainly used in harbors and other shallow water.

A water injection dredger injects water in a small jet under low pressure (low pressure because the sediment should not explode into the surrounding waters, rather it is carefully moved to another location) into the seabed to bring the sediment in suspension, which then becomes a turbidity current, which flows away down slope, is moved by a second burst of water from the WID or is carried away in natural currents. Opposition claims that Water Injection Dredging is not a natural way of dredging while the side of the WID claims otherwise.

As a side note: Water injection results in a lot of sediment in the water which makes measurement with most hydrographic equipment (for instance: singlebeam echosounder) difficult and should make use of filtering to produce better results.

These dredgers use a chamber with inlets, out of which the water is pumped with the inlets closed. It is usually suspended from a crane on land or from a small pontoon or barge. Its effectiveness depends on depth pressure.

This is a bar or blade that is pulled over the seabed behind any suitable ship or boat. It has an effect similar to that of a bulldozer on land.

This is an early type of dredger, formerly used in shallow water in the Netherlands. It was a flat-bottomed boat with spikes sticking out of its bottom. As tide current pulled the boat, the spikes scraped seabed material loose, and the tide current washed the material away, hopefully to deeper water. Krabbelaar is Dutch for "scratcher."

Some amphibious dredgers can be any of the above types of dredger, which can operate normally, or by extending legs, also known as spuds, so it stands on the seabed with its hull out of the water. Some forms can go on land.

Some of these are land-type backhoe excavators with wheels on long-hinged legs, allowing it to drive into shallow water and keep its cab out of water. Some of these may not have a floatable hull and, if so, cannot work in deep water.

Submersibles are usually used to recover useful materials from the seabed. Many of them travel on caterpillar tracks.

Scallop dredges are used for collecting scallops or oysters from the seabed. They have the form of a scoop made of chain mesh and are towed by a fishing boat. However, careless scallop dredging can harm the seabed and can result in scallops containing grit. Nowadays, scallop dredging is often replaced by scuba diving.

In some police departments, a small dredge (also called a drag) is used to find and recover objects and bodies from underwater. The bodies may be victims of murder, suicide (by drowning), or accidents. The drag is sometimes pulled by men walking on the bank.

In a "hopper dredger," the dredged materials end up in a large onboard hold called a "hopper." A suction hopper dredger is usually used for maintenance dredging. A hopper dredge usually has doors in its bottom to empty the dredged materials, but some dredges empty their hoppers by splitting the two halves of their hulls on giant hinges. Either way, as the vessel dredges, excess water in the dredged materials is spilled off as the heavier solids settle to the bottom of the hopper. This excess water is returned to the sea to reduce weight and increase the amount of solid material (or slurry) that can be carried in one load. When the hopper is filled with slurry, the dredger stops dredging and goes to a dump site and empties its hopper.

Some hopper dredges are designed so they can also be emptied from above using pumps if dump sites are unavailable or if the dredge material is contaminated. Sometimes the slurry of dredgings and water is pumped straight into pipes which deposit it on nearby land. Other times, it is pumped into barges (also called scows), which deposit it elsewhere while the dredge continues its work.

When contaminated (toxic) sediments are to be removed, or large volume inland disposal sites are unavailable, dredge slurries are reduced to dry solids via a process known as dewatering. Current dewatering techniques employ either centrifuges, large textile based filters or polymer flocculant/congealant based apparatus.

In many projects, slurry dewatering is performed in large inland settling pits, although this is becoming less and less common as mechanical dewatering techniques continue to improve.

Similarly, many groups (most notable in east Asia) are performing research towards utilizing dewatered sediments for the production of concretes and construction block, although the high organic content (in many cases) of this material is a hindrance toward such ends.

Dredging can create disturbance to aquatic ecosystems, often with adverse impacts. In addition, dredge spoils may contain toxic chemicals that may have an adverse effect on the disposal area; furthermore, the process of dredging often dislodges chemicals residing in benthic substrates and injects them into the water column.

The activity of dredging can create the following principal impacts to the environment:

Retrieved from https://www.newworldencyclopedia.org/p/index.php?title=Dredging&oldid=1007193
Categories:
Hidden category:
This page was last edited on 10 October 2017, at 15:56.
Content is available under Creative Commons Attribution/Share-Alike License; additional terms may apply. See Terms of Use for details.