Maronites are members of one of the Syriac Eastern Catholic Churches, with a heritage reaching back to Saint Maron in the early fifth century C.E. The first Maronite patriarch, John Maron, was appointed in the late seventh century. Although reduced in numbers and estimated to have lost their status as a majority in Lebanon itself, today, Maronites remain one of the principal religious groups in the country.

Before the conquest of Lebanon by Arabian Muslims, which resulted in the Arabization of the Lebanese population, including Maronites, spoke a dialect of Aramaic. Since at least the fifteenth century, the population has been Arabic-speaking.[1] However, Syriac remains the liturgical language of the Maronite Church. Saint Maron (died sometime between 406 and 423 C.E.), founder of the Maronite spiritual movement. Since the seventeenth century his feast day has been celebrated on February 9.

It was in Antioch that the followers of Jesus Christ were first called Christians (Acts 11:26). The city of Antioch became a center for Christianity following the destruction of Jerusalem in 70 C.E. Furthermore, Antioch was one of the five original Patriarchates after Constantine I recognized Christianity. According to Catholic tradition, the first Bishop was Saint Peter before his travels to Rome. The third Bishop was the Apostolic Father Ignatius of Antioch.

Maroun, a contemporary and friend of St.John Chrysostom, was a monk in the fourth century who left Antioch for the Orontes River to lead an ascetic life, following the traditions of Anthony the Great of the Desert and Saint Pachomius. He soon had many followers that adopted his monastic life. Following the death of Maron in 410 C.E., his disciples built a monastery in his memory and formed the nucleus of the Maronite Church.

The Maronites held fast to the beliefs of the Council of Chalcedon in 451 C.E. When 350 monks were slain by the Monophysites of Antioch, the Maronites sought refuge in the mountains of Lebanon. Correspondence concerning the event brought papal and orthodox recognition of the Maronites, which was solidified by Pope Hormisdas on February 10, 518 C.E.

The martyrdom of the Patriarch of Antioch in 602 C.E. left the Maronites without a leader, a situation which continued because of the devastating wars between the Byzantine and Persian Empires of the early seventh century. The chaos and utter depression that followed led the Maronites to elect their first Maronite Patriarch, John Maroun, in 685 C.E. This election, however, was seen as a usurpation by the Orthodox church. At this time, Islam was rising on the borders of the Byzantine Empire but the Maronites were preoccupied with their struggle to retain their independence from Byzantine imperial power. This situation was mirrored in other Christian communities in the Byzantine Empire and helped facilitate the Muslim conquest of most of Eastern Christendom by the end of the century.

Under Arabic rule following the Muslim conquest of Syria, the Maronites' relationship with the Byzantine Empire improved. The imperial court saw an advantage in the current situation. Thus, Byzantine Emperor Constantine IV provided direct ecclesiastical, political and military support to the Maronites. The new alliance soon coordinated devastating raids on Muslim forces, providing a welcome relief to the besieged Christians throughout the East. Some of the Maronites relocated to Mount Lebanon at this time and possibly formed several communities that became known as the Marada.

The most widely accepted theory stipulates that the Maronites fled Jacobite monophysite persecution, because of Monothelite heresy as advanced by Sergius of Tyr a scholar of the tenth century. It is most probable because nearly all the sects became Monothelite after that Patriarch Sergius I of Constantinople introduced it. The Maronite migration to the mountains was over a long period but a main migration likely occurred between the seventh and the eleventh century C.E. 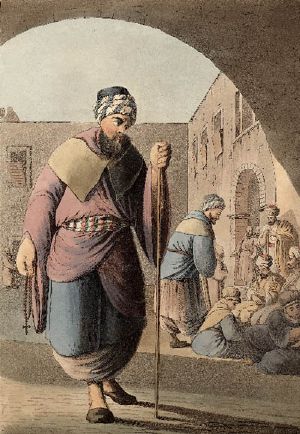 Since 685 C.E., the Maronites have found themselves isolated from Christians of the Byzantine Empire and European powers. In turn, they have appointed their own Patriarch, starting with John Maron. Through him, the Maronites of today claim full apostolic succession through the See of Antioch albeit they have been accused of having fully adopted and embraced the Monothelite heresy.

Following the conquest of Eastern Christendom outside of Anatolia and Europe by the Muslims, little was heard from the Maronites for 400 years. Secure in their mountain fastnesses, it was not until the Crusader Raymond of Toulouse on his way to conquer Jerusalem during the Crusades that the Maronites were re-discovered in the mountains near Tripoli, Lebanon. Raymond later returned to besiege Tripoli after his conquest of Jerusalem and relations between the Maronites and European Christianity were re-established.

During the Crusades of the twelfth century, the Maronites assisted the Crusaders and reaffirmed their affiliation with the Holy See in Rome in 1182. From at least from this point onwards, the Maronites have upheld an unbroken ecclesiastical orthodoxy and unity with the Catholic Church. To commemorate this communion, in 1100 Maronite Patriarch Youseff Al Jirjisi received the crown and staff marking his patriarchal authority, from Pope Paschal II. In 1131, Maronite Patriarch Gregorious Al Halati received letters from Pope Innocent II in which the Papacy recognized the independence of the Patriarchate. 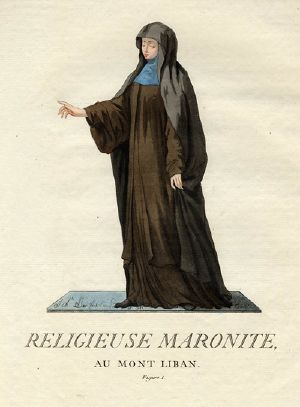 However, this Roman affiliation was to cost the Maronites dearly after Muslim rule returned following the ethnic cleansing of the Crusader States in 1291. The Mamelukes led a jihad which exterminated the last of the European Christians at the Siege of Acre in 1291 and was continued in anti-Eastern Christian pogroms in following decades.

However, connection to Rome was arduously maintained and through diplomatic threats and maneuvering, European Christian powers helped keep the Maronite community from destruction. Eventually, a Maronite College was established at Rome on July 5, 1584. From this college, the Maronite community obtained some valuable assistance in maintaining and buttressing their Christian identity. In 1610, the Maronite monks of the Monastery of Saint Anthony of Qozhaya imported one of the first printing presses into the Arabic-speaking world. The monasteries of Lebanon would later become key players in the Arabic Renaissance of the late nineteenth century as a result of developing Arabic, as well as Syriac, printable script.

Following the defeat of the Mamelukes by the Ottoman Empire, at first the Sultans left the Maronites to their own devices in their mountain strongholds. However, the chaos that resulted from the neglect of early Ottoman rule was exploited by rival Muslim warlords and their Druze allies leading to a constant state of turmoil that continued to limit the survivability of the Christian Maronites. Finally, following a rapid campaign, the Druze warlord Fahkr-al-Din II conquered and ruled Greater Lebanon from 1585 to 1635 and implemented a more or less stable situation. Unwilling to tolerate an Islamic heretic warlord in control of the area, the Ottomans led a military campaign and Fahkr-al-Din II was defeated by Ottoman forces and executed at Constantinople on April 13, 1635.

In 1638, France declared that it would protect the Catholics within the Ottoman Empire, including the Maronites, with the threat of war should Muslim jihads again be launched against Catholics under the Sultan's rule. 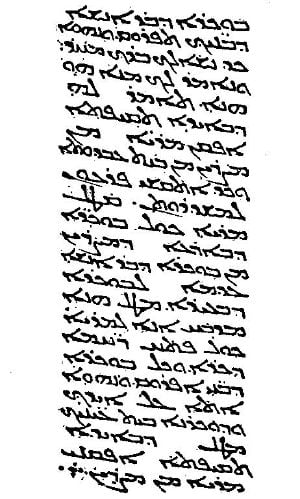 The Peshitta is the standard Syriac Bible, used by the Maronite Church, amongst others. The illustration is of the Peshitta text of Exodus 13:14-16 produced in Amida in the year 464.

Maronites share the same doctrine as other Catholics, but they retain their own liturgy and hierarchy. Strictly speaking, the Maronite church belongs to the Antiochene Tradition and is a West Syro-Antiochene Rite. Syriac is the liturgical language, instead of Latin which was a tradition of the Roman Rite. Nevertheless, they are considered, along with the Syro-Malabar Church, to be among the most latinised of the Eastern Catholic Churches.

Cardinal Sfeir's personal commitment accelerated liturgical reforms in the 1980s and 1990s, bearing fruit in 1992 with the publication of a new Maronite Missal. This development represents an attempt to return to the original form of the Antiochene Liturgy, removing the liturgical latinisation of past centuries.

Celibacy is not required for deacons and priests with parishes (though they may not re-marry after the death of a spouse); monks must remain celibate, as well as bishops who are normally selected from the monasteries. Due to a long-term understanding with their Latin Rite counterparts in North America, Maronite priests in that area are expected to remain celibate. The bishops who serve as eparchs and archeparchs of the eparchies and archeparchies (the equivalent of diocese and archdiocese in the Roman Catholic Church) are answerable to the patriarch. Maronite Patriarch and bishops in Rome, 1906.

The exact worldwide Maronite population is not known, although it is at least three million according to CNEWA (Catholic Near East Welfare Association). It is estimated that 1,000,000 to 1,500,000 remain in Lebanon where they constitute up to 25 percent of the population. According to a Lebanese agreement celebrated among the various religious leaders, the president must be a Maronite. Syrian Maronites total 40,000 and they follow the archdioceses of Aleppo and Damascus and the Diocese of Latakia. There is also a Maronite community in Cyprus which speaks Cypriot Maronite Arabic.[2] They are a recognized religious minority on the island of Cyprus and the community elects a representative to sit in the parliament to voice their interests. They may have descended from those Maronites who accompanied the crusaders there. A noticeable Maronite community also exists in northern Israel.

The two residing eparchies in the United States have issued their own "Maronite Census." The Census is designed to estimate approximately how many Maronites reside in the United States due to their emigrations to that country. Many Maronites have been assimilated into American culture, often taking on Roman Catholicism as there were no Maronite parishes or priests available. The Census was designed to locate those people. There is also an eparchy in São Paulo, Brazil.

Modern Maronites, like other Christians in the Levant, often adopt French or other Western European given names (with biblical origins) for their children like "Michel," "Marc," "Marie," "Georges," "Carole," "Charles," "Chris," "Antoine," and "Pierre." Other common names derive from Aramaic, or Arabic, forms of biblical, Hebrew, or Greek Christian names, such as "Antun," (Anthony, also "Tanios," "Antonios," or "Tannous"), "Butros" (Peter), "Boulos (Paul)," "Semaan" or "Shamaoun" (Simon), "Jergyes" (George), "Elie" (Ilyas, or Elias), "Iskander" (Alexander), or "Beshara" (literally, "Good News" in reference to the Gospel), other common names are Sarkis (Sergius) and Bakhos (Bacchus), while others are common both among Christians and Muslims, such as "Yousseff" (Joseph) or "Ibrahim" (Abraham). Some Maronite Christians are named in honour of Maronite saints, including the Aramaic names "Maroun" (after their patron saint, Maron), "Sharbel" or "Charbel," or "Rafqa"

Retrieved from https://www.newworldencyclopedia.org/p/index.php?title=Maronite_Church&oldid=1063760
Categories:
Hidden category:
This page was last edited on 27 January 2022, at 16:35.
Content is available under Creative Commons Attribution/Share-Alike License; additional terms may apply. See Terms of Use for details.