Its name refers to the giant ice cap in the Andes mountain range that feeds 47 large glaciers, of which only 13 flow toward the Atlantic Ocean. It is part of the third largest glacial landmass worldwide, and the largest outside Antarctica and Greenland. In other parts of the world, glaciers start typically at of at least 2,500 meters above sea level (AMSL). Due to the size of the ice cap, the glaciers of Los Glaciares begin at 1,500 meters (4,900 ft), slipping to 200 meters (660 ft) AMSL, eroding the surface of the mountains that support them.

Los Glaciares was declared a World Heritage Site in 1981 by UNESCO. In its citation the site was described it as "an area of exceptional natural beauty, with rugged, towering mountains and numerous glacial lakes." The Park contains a good representative sample of Patagonian cold forests, with an impressive array of wildlife, and is particularly known for its wide variety of birds.

Los Glaciares National Park comprises an area of 1,101,843 acres (4,459.00 km²)[1]. The park, 30 percent of which is covered by ice, can be divided into two regions: forests and grassy plains in the east, and peaks, lakes, and glaciers in the west. Each corresponds with one of the two elongated lakes partially contained by the park. Lake Argentina, 566 square miles (1,470 km²) and the largest in Argentina, is in the south, while Lake Viedma, 425 square miles (1,100 km²), is in the north. Both lakes feed the Santa Cruz River that flows down to Puerto Santa Cruz on the Atlantic coast. Between the two halves is a non-touristic zone without lakes called Zona Centro.

The northern half consists of part of Viedma Lake, the Viedma Glacier and a few minor glaciers, and a number of mountains very popular among fans of climbing and trekking, including Mount Fitzroy, the highest point in the park at 3,375 meters (11,070 ft), and Cerro Torre.

The southern part has, as well as a number of smaller ones, the major glaciers that flow into Lake Argentina: Perito Moreno Glacier, Upsala Glacier, and Spegazzini Glacier. Typical excursion boats travel between icebergs to visit Bahía Onelli and the otherwise inaccessible Spegazzini and Upsala. The Perito Moreno is reachable by land.

Perito Moreno, one of the largest glaciers in both the park and South America, has walls that rise over 40 meters (130 ft) from where the ice meets the Lago Argentino, or Lake Argentina. It is noted for its dynamic and ever-changing facade. While most glaciers are receding, the Peritio Moreno formation is an "advancing glacier" whose ice is continually expanding outward, adding up to seven feet each day. On the other hand, as chunks of ice fall from the walls, the size shrinks. It can be viewed by foot or from a cruise boat.

The Upsala Glacier, located near the northern arm of Lago Argentino is 50 kilometers (31 mi) long, 10 kilometers (6.2 mi) wide, and hundreds of meters thick. Considered one of three major glaciers in the park, along with Perito Moreno and Spegazzini, the beauty of the Upsala glacier is renowned. It also possesses one of the most significant medial moraines in South America. A moraine is a collection of rock, sand, and clay deposits that has fallen from neighboring mountains and is transported by the slow movements of glacial ice sheets. Over time, these accumulations grow, marking the direction of glacial flow. A medial moraine appears when more than two glaciers unite and bring together debris from multiple sources.

The Spegazzini Glacier covers an area of 25.5 square miles (66 km²) and is 1.5 kilometers wide. It is outstanding mainly for its high and imposing walls. The front of the glacier reaches 135 meters. 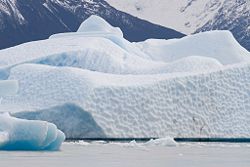 Iceberg floating in the Argentino Lake near the Upsala Glacier 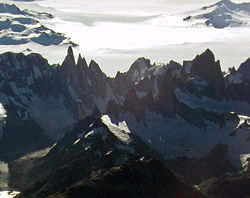 Part of the 100-meter wall of the Spegazzini glacier falling 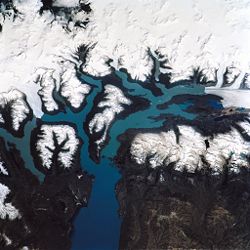 Los Glaciares as seen from space

The mountains hold most of the humidity from the Pacific Ocean, letting through only the icy coldness (annual average of 7.5 °C) and creating an arid steppe on the Argentine side of the range. This area is habitat for guanacos (a camelid animal native to the arid, mountainous regions of South America, cougars, chinchillas, pudu and guemal (two species of small deer), and gray foxes. Foxes have suffered from the invasion of the cattle industry and are endangered. The guanaco, while not endangered, has had a dramatic decline in its historic population due to large-scale grazing of livestock throughout much of Patagonia.

There are over a hundred species of birds in the area, including rheas (large, flightless birds with long legs and long necks, similar to an ostrich), condors, eagles, torrent ducks, white-throated caracaras, and yellow-bridled and black-throated finches. The Magellan oystercatcher breeds on the shores of lakes and lagoons. Some other species, such as the cordilleran snipe and the austral rail, are seldom seen.

Approximately, 260,000 hectares (642,474 acres) are covered with ice and therefore have no vegetation; another 95,000 hectares (234,750 acres) are lakes. Forests cover about 79,000 hectares (195,213 acres) and the predominant species are lenga (beech) and guindo.[2] The flora grows in three well-defined areas: steppe, forest, and highlands semi-desert. Those on the steppe present a high level of adaptation to very dry conditions and defense against cold and wind. The "gramineas," for example, grow in low and compact tufts, with folded leaves, rigid and covered with thick cutine, which diminishes evaporation.

Lenga (Nothofagus pumilio) is a deciduous tree or shrub native to the southern Andes range. It grows in areas with low temperatures and abundant snow; it tolerates temperatures of −22°F(−30°C) and lower and frosts at all seasons of the year.

In between the upper Andean vegetation and the lakes the most important species are in the Nothofagus genus. The woods' upper boundary lies between 1,000 meters (3,300 ft) and 1,100 meters (3,600 ft). There are three Nothofagus species in the park:

Of these, the lenga is the most widely distributed and occupies the biggest proportion of the woods. They are found usually covered with Usnea, called "old man's beard" because it hangs in long ribbons hanging from the trees. The mountains around Lago Argentino are covered with dense woods.

The environmental activist group attributed the increased thinning to climate change, manifested in a pattern of higher air temperatures and decreased precipitation. It noted, however, that part of the answer can be found in the special dynamics of these glaciers, which are dominated by so-called calving glaciers. Such glaciers spawn icebergs into the ocean or lakes and have different dynamics from glaciers that end on land and melt at their front ends. Calving glaciers are more sensitive to climate change once pushed out of equilibrium.

Los Glaciares is a major attraction for international tourists. Starting points of tours are the village of El Calafate at the shore of Lake Argentina but outside the park, where the park's administration has its headquarters, and El Chaltén village in the northern part of the park, at the foot of Mount Fitzroy. Other touristic points in the park include Lago del Desierto and Lago Roca. Reservations are recommended for guided tours during the summer (December to March).

Global warming is affecting the glaciers in this national park named for their looming presence. Greepeace has reported that the Patagonian ice fields are losing 42 cubic kilometers of ice every year.[3]

Guemal (or Huemul) (a species of deer) occur in several national parks in Chile and neighboring parts of Argentina, including Los Glaciares National Park. They have been on the endangered list since 1976, primarily due to human impacts such as deforestation, habitat fragmentation by roads, introduction of non-native mammals such as farm animals, and poaching. They are in a classic "extinction spiral" marked by increasingly small, isolated populations and are now considered critically endangered. An estimated 15,000 wild horses share the huemul habitat of Valle Mascarello, but more study must be done before deciding how to handle this problem as eliminating the horses could cause a greater predation of the huemul by pumas.