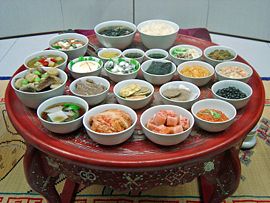 Korean cuisine refers to the traditional foods and preparation techniques of Korea. From the complex Korean royal court cuisine to regional specialties and modern fusion cuisine, their ingredients and preparation vary richly. Many dishes have become internationally popular.

Historically, for the Korean people growing, harvesting, preparing, and eating food has been a social event. Living with a high population density in the Korean Peninsula throughout their history, Koreans have clustered in village communities outside their major cities. The communal lifestyle, heightened during the Joseon dynasty, made eating one of the most important times of day in the extended family farm home and the royal court. The vitality of Korean family and communal life reaches a climax during the meal time when Koreans enjoy a time together with their traditional foods. Although the variety and quality of food differed dramatically between for poor farmer and the royal court, the importance of Korean cuisine and meal time remained constant.

Korean royal cuisine, once only enjoyed by the royal court of the Joseon period, takes from a few hours to several days to prepare. The chief harmonizes warm and cold, hot and mild, rough and soft, solid and liquid, and balances colors. Served on hand-forged bronzeware or bangjjaa, the specific arrangement of small dishes alternates to highlight the shape and color of the ingredients. Restaurants that serve traditional royal cuisine can be found in select locations within the city of Seoul, charging as much as ₩240,000 (~US$265) per person. Imperial cuisine has received a recent boost in popularity due to Dae Jang Geum, a widely popular Korean television drama about a humble girl becoming the royal head chef during the Joseon period.

Koreans traditionally sat on cushions at low tables with their legs crossed in a modified lotus position, although most urban Koreans normally east Western style at tables. Some traditional restaurants provide floorchairs with backs. A silver or stainless steel chopsticks (jeotgarak) and a long-handled shallow spoon (sutgarak) usually accompany meals. Sutgarak bare closer resemblance to the Western spoon than the Chinese soup spoon. The jeotgarak and sutgarak set make a sujeo (a contraction of sutgarak and jeotgarak) set, although sujeo can also mean a sutgarak. Unlike other chopstick cultures, Koreans have used spoons since at least the fifth century. Unlike the Chinese and Japanese, Koreans generally leave their rice or soup bowls on the table, eating from them with spoons. Koreans eat banchan with chopsticks.

A typical table setting consists of:

Drinks may or may not be served while eating. Families usually drink chilled or iced water with meals. In restaurants, waiters usually serve water or tea, usually a grain tea such as barley tea rather than actual tea. Alcohol often accompanies a traditional Korean meal. After the meal, patrons might drink a sweet refresher like soojunggwa or shikye. The type of drink might vary with the season.

Although custom allows freedom to determine the order to eat foods on the table, customarily the Koreans eats from their individual rice or soup bowl while sharing banchan (side dishes). According to Korean tradition, elders, superiors, and guests have the privilege of eating first. Commonly, elders, superiors, and guests receive the best food dishes. Etiquette requires that the bowls stay on the table, people using the sutgarak (spoon) and jeotggarak (chopsticks) to eat. Although normally considered uncouth, picking up the bowls may be socially acceptable in casual settings. During the Joseon dynasty the yangban class had the privilege of eating from lacquered tables as opposed to peasants who at meals in the field.

Some table manners may denote a lack of etiquette. Koreans allow wide latitude to international guests who visit Korea. Koreans hold each other to a stricter standard. The same holds true for visitors' use of honorific endings and nunchi. Some examples of undesirable table etiquette among Koreans includes:

Because the answer "Mm" means "yes," you may answer a question with a closed mouth while eating. Replying with one's mouth open or with food showing displays poor table etiquette, although you may slurp soup if server boiling hot. Older people, and higher ranked people by profession or social status, may ignore custom while other people at the table have to follow the rules. As mentioned earlier, Koreans understand that international visitors lack knowledge of Korean customs. Though diners may leave shared food unfinished, custom requires finishing one's individual portion of rice. Eating too quickly will imply that the host provided insufficient food. At restaurants, Koreans tend to have one person pay for the entire meal although among young people paying "Dutch" by dividing up the bill has become popular. Custom permits asking for refills of banchan dishes. Much of Korean cuisine consists of simple dishes known for its strong, pungent flavors and odors. Many Korean banchan rely on fermentation for flavor and preservation, resulting in a tangy, salty, and spicy taste.

Some dishes (for example, the city of Jeonju with Bibimbap) associate especially with certain regions, either as the place of origin or regional variety of the food. Restaurants often use those famous names on their signs or menus (i.e., "Suwon galbi"). 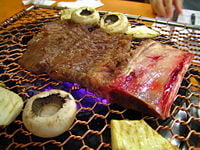 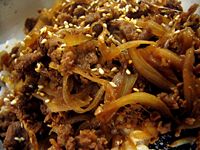 At traditional restaurants, waiters cook meats at the center of the table over a charcoal grill while the set banchan and individual rice bowls in front of each patron. Diners place the cooked meat, cut into small pieces, in fresh open lettuce leaves along with rice, thin slices of garlic, ssamjang (mixture of gochujang and dwenjang), and other seasonings. 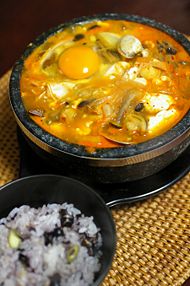 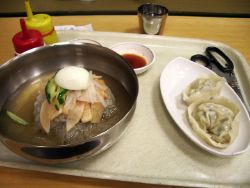 Snacks play an important social role in Korean culture. In Korea, snack food may be purchased from street carts during the day, where customers may eat standing beside the cart or have their food wrapped up to take home. At night, many streets fill with small tents that sell inexpensive foods, drinks, and alcoholic beverages. Most Korean people consider the food as snacks rather than a complete meal. Seasonal snacks include Patbingsu a refreshing iced treat eaten in the summer, and warm soup, gimbap, hotteok, and Bungeoppang, enjoyed in the fall and winter. 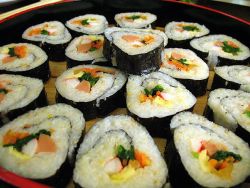 Gimbap (literally, seaweed-rice, 김밥) a popular snack in Korea, consists of cooked rice, sesame oil, salt, and sesame seeds, vinegar and sugar added as seasonings wrapped in a sheet of dried laver. The seasoned rice spread on the laver, then fried egg, julienned carrots, julienned ham, seasoned ground beef or seasoned fish cakes, pickled radish, seasoned spinach, and seasoned gobo and cucumber packed on the rice, and rolled in the manner similar to that of the Japanese sushi. Varieties of gimbap include tuna, cheese, bulgogi, vegetable. 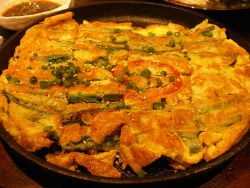 Fermented kimchi (kimchijeon) or seafood (haemul pajeon), mixed into a flour-based batter and fried in an oiled pan. Dipping in a mixture of soy sauce, vinegar, and red pepper powder popular.

Bungeoppang (붕어빵; "goldfish-bread"), a fish-shaped pastry usually filled with sweet red bean paste and baked in a fish-shaped mold. Chewy on the inside and crispy on the outside. Gukwa-ppang (국화빵), similar to bungeo-ppang, but shaped like a flower. Gyeran-ppang (계란빵) tastes similar to bungeo-ppang, but shaped in a rounded rectangle. Often sold by street vendors. (See also taiyaki.) 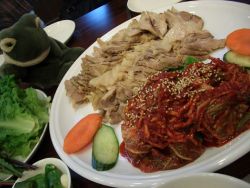 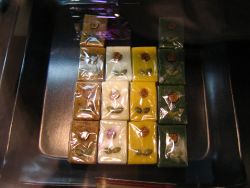 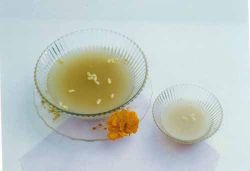 While soju (소주) stands out as the best known liquor, stores and resturants offer over 100 different beers, wines and liquors in Korea. Lagers constitute the top-selling domestic beers, similar to others found in Europe and Asia. These include: 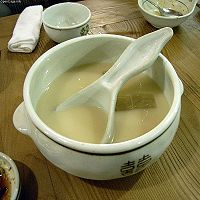 A bowl of makgeolli, a type of takju

Soju: A clear spirit originally made from grain, now also made from sweet potatoes. Koreans consider soju made from grain superior (as with grain vs. potato vodka). Soju, with around 22 percent ABV, represents a favorite beverage of college students, hard-drinking businessmen, and blue-collar workers.

Juansang: Alcoholic drinks (ju) and accompanying side dishes (an) set together on the table. The dishes vary depending on the kinds of liquor or wine.

Gyojasang: A large table prepared for banquets. Alcohol beverages and a large variety of side dishes, rice cakes, confectioneries, and fruit punch placed together on the table. After finishing the liquor, waiters serve noodle soup.

Fusion food also rapidly becoming popular. Many Chinese, northern Italian, French, and Indian fusion restaurants are found throughout South Korea. Vegetarian restaurants, sidelined with the decline of Buddhism and advance of missionary Christianity, have had a small resurgence, found in most cities.

Korean restaurants abound in areas with large Korean populations. Common examples include Koreatowns situated in other countries. Restaurants run by the North Korean government have opened in China.

Although controversial, and illegal in South Korea, some restaurants specialize in serving dog meat.[6] Dog meat, most commonly eaten in the summer as bosintang (spicy dog stew) by older men in rural restaurants, has the reputation of enhancing virility and physical stamina during hot summer days as well as other supposed "medicinal" benefits.[7] Korean companies also manufacture a medicinal extract called gaeju (개주) or gaesoju (개소주), made from dog meat as well as various herbs and other ingredients (but which, despite its name, contains no alcohol).[8]

Although against the law, the sale of dog meat takes place openly. Korean breeders raise a mixed breed of dog with yellowish coloring, called nureongi (누렁이), specifically for slaughter and consumption.

Retrieved from https://www.newworldencyclopedia.org/p/index.php?title=Korean_cuisine&oldid=1032448
Categories:
Hidden category:
This page was last edited on 16 February 2020, at 18:15.
Content is available under Creative Commons Attribution/Share-Alike License; additional terms may apply. See Terms of Use for details.