Chuseok (Korean: 추석; hanja: 秋夕), literally "Autumn eve," once known as hangawi (Korean: 한가위); from archaic Korean for "the great middle (of autumn)"), is a major harvest festival and a three-day holiday in both North and South Korea. It is celebrated on the 15th day of the eight month of the lunar calendar on the full moon. Like many other harvest festivals around the world, it is held around the autumn equinox at the very end of summer or early autumn. It is often referred to as the Korean "Thanksgiving Day."

Koreans visit their ancestral hometowns where they pay respect to their ancestors and share a feast of Korean traditional food such as songpyeon (Hangul: 송편) and rice wines to celebrate the good harvest. There are two major traditions related to Chuseok, both of which reflect the Korean attitude of respect for ancestors and the importance of the family: Charye (차례), ancestor memorial services at home, and Seongmyo (Hangul: 성묘), family visit to the ancestral graves.

According to popular belief, Chuseok originates from Gabae (Hangul: 가배), which started during the reign of the third king of the kingdom of Silla (57 B.C.E. - 935 C.E.)[1]

Chuseok may originate from shamanistic celebrations of the harvest moon.[1] New harvests are offered to local deities and ancestors, which means Chuseok may have originated as a worship ritual.

Chuseok celebrates the bountiful harvest, with hope for the next year to be better than the last. During this time the ancestors are honored in special ceremonies.

Charye is one of the ancestral memorial rites celebrated during Chuseok, symbolizing the returning of favors and honoring ancestors and past generations.[2]

The rite involves the gathering of families in holding a memorial service for their ancestors through the harvesting, preparation, and presentation of special foods as offerings.[3] The rite embodies the traditional view of spiritual life beyond physical death, respecting the spirits of the afterlife that now also serve to protect their descendants.

The foods offered have traditionally varied across provinces depending on what was available. Foods for the offering table must include freshly harvested rice, alcohol, and songpyeon (half-moon rice cakes), prepared as an offering to the family’s ancestors.[4] The family members then enjoy a festive meal which may include japchae, bulgogi, an assortment of Korean pancakes, and fruits.

Seongmyo, visiting the ancestors' graves, and Beolcho, cleaning the grave sites, are also done during Chuseok week. These old traditions are carried out to show respect and appreciation for family ancestors.

Usually people visit these ancestral grave sites several days before Chuseok in order to remove weeds that have grown there over the summer. This custom of Beolcho is considered a duty and an expression of devotion.[5]

During Seongmyo, family members gather at their ancestors' graves and pay respect to the deceased with a simple memorial service. 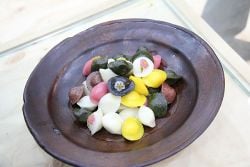 When making songpyeon, during the steaming process the rice cakes are layered with pine needles. The word song in songpyeon means pine tree in Korean. The pine needles form a pattern on the skin of songpyeon, and so contribute not only to their aroma and flavor but also to their beauty.[5][6]

Songpyeon is also significant because of the meaning contained in its shape. The round rice skin itself resembles the shape of a full moon, but once it is wrapped around the filling its shape resembles a half-moon. According to a Korean legend from the Three Kingdoms era, these two shapes ruled the destinies of the two greatest rival kingdoms, Baekje and Silla. During the era of King Uija of Baekje, an encrypted phrase, "Baekje is full-moon and Silla is half moon" was found on the back of a turtle and it predicted the fall of the Baekje and the rise of the Silla. The prophecy came true when Silla defeated Baekje. Ever since, Koreans have believed a half-moon shape is an indicator of a bright future or victory.[6] Therefore, during Chuseok', families gather together and eat half-moon-shaped songpyeon under the full moon, wishing for a brighter future.[5]

Another popular Korean traditional food that people eat during Chuseok is hangwa. Hangwa is made with rice flour, honey, fruit, and roots. People use edible natural ingredients to express various colors, flavors, and tastes. Decorated with natural colors and textured patterns, it is a festive confectionery. Koreans eat hangwa not only during Chuseok, but also for special events, such as weddings, birthday parties, and marriages.

The most famous types of hangwa are yakgwa, yugwa, and dasik. Yakgwa is a medicinal cookie which is made of fried rice flour dough ball, and yugwa is a fried cookie that also refers to a flower. Dasik is a tea cake that people enjoy with tea.[7]

A major element of Chuseok is the alcoholic beverages. At the memorial service for their ancestors, included in the offering of foods is also an alcoholic beverage made of the newly harvested rice. This traditional rice wine is called baekseju.

A Chuseok tradition in modern-day Korea is that of gift-giving. Koreans will present gifts to not only their relatives, but also to friends and business acquaintances to show their thanks and appreciation.

In the 1960s Korean people started sharing daily necessities, such as sugar, soap, or condiments, as Chuseok gifts. As the Korean economy developed, options for Chuseok gifts also increased, to include cooking oil, toothpaste, instant coffee sets, cosmetics, television, and rice cookers. Gift sets of fruit, meat, traditional Korean snacks, ginseng, and cosmetics became popular, as well as sets of olive oil, natural vinegar, ginger, fruits, mushrooms, and that Korean favorite, Spam, which are sold at high prices in the weeks before Chuseok.[8]

A variety of folk games are played on Chuseok to celebrate the coming of autumn and the rich harvest. Village folk may dress themselves to resemble a cow or turtle, and go from house to house along with a nongak band playing music. Other common traditional games played on Chuseok include Ssireum (Korean wrestling), Taekkyon, and Juldarigi (tug-of-war). In the evening, the folk dance Ganggangsullae is often performed by the women. 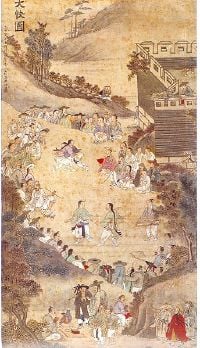 Ssireum (Hangul: 씨름) is the most popular Korean sport played during Chuseok, and contests are usually held during this holiday. Ssireum is assumed to have 5000 years of history; scholars have found evidence for ssireums dating back to the Goguryeo dynasty,

Two players wrestle each other while holding onto their opponent's satba, a red and blue band. A player loses when his upper body touches the ground, and the winner becomes Cheonha Jangsa, Baekdu Jangsa, or Halla Jangsa, meaning "the most powerful." The winner gets a bull and 1 kg of rice as the prize.[9] Due to its popularity among both the young and the old, ssireum contests are held quite frequently, not limited to important holidays.

Taekkyon (Hangul: 태껸 or 택견) is one of the oldest traditional martial arts of Korea. Taekkyon was very popular during the Joseon period where it was practiced alongside Ssireum during festivities, including Chuseok. Tournaments between players from different villages were carried out, starting with the children ("Aegi Taekkyon") and finishing with the adults.

Taekkyon is a hand-to-hand fighting method in which practitioners makes use of fluid, rhythmic dance-like movements to strike or trip up an opponent. The practitioner uses the momentum of his opponent to knock him down. Taekkyon was listed as a UNESCO intangible cultural heritage item in 2011.[10] 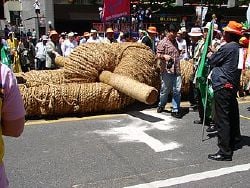 Juldarigi (Hangul: 줄다리기), or tug-of-war, is traditionally enjoyed by an entire village population. The sport uses two huge rice-straw ropes, connected by a central peg, which are pulled by teams representing two sides of the village (East and West). A number of religious and traditional rituals are performed before and after the actual competition. The game is considered an agricultural rite to augur the results of the year's farming. The outcome determined whether to expect a rich or poor harvest next year. Juldarigi has been recognized as a Korean Intangible Cultural Property.[11] 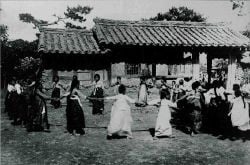 The Ganggangsullae (Hangul: 강강술래) dance is a traditional folk dance performed under the full moon on the night of Chuseok. Women wear Korean traditional dress, hanbok, make a big circle by holding hands, and sing a song while going around a circle.

The dance originated in the southern coastal area during the Joseon dynasty. It takes its name from the refrain repeated after each verse, although the exact meaning of the word is unknown.[12]

In contemporary South Korea, masses of people travel even long distances from large cities to their hometowns to pay respect to the spirits of their ancestors on Chuseok. Travel tickets are usually sold out three months in advance and roads and hotels are overcrowded.[13]

South Koreans consider autumn the best season of the year due to clear skies and cool winds; it is the perfect harvesting season. People perform ancestral worship rituals early in the morning. Then, they visit the tombs of their immediate ancestors to trim plants and clean the area around the tomb, and pay their respects.[4] A successful harvest is attributed to the blessing of the ancestors. Chuseok is commonly translated as "Korean Thanksgiving" in American English.[14]

Although most South Koreans visit their families and ancestral homes, there are festivities held at the National Folk Museum of Korea. Many places are closed during this national holiday period, including banks, schools, post offices, governmental departments, stores, and so forth.

Since Chuseok has been a traditional holiday since long before the division of Korea, people in North Korea also celebrate Chuseok. However, the ideology that divided Korea also caused some differences between Chuseok of North Korea and that of South Korea.[15] Since the division, South Korea has adopted a westernized culture, so the way South Koreans enjoy the holiday is the typical way of enjoying holidays with family members.

Meanwhile, North Korea moved away from the traditional ways; in fact, North Korea did not celebrate traditional holidays until the mid-1980s. Chuseok was designated an “ethnic festival” in 1986 by Kim Jong-il and became a national holiday in 1988.[16] Today, North Koreans celebrate Chuseok in a more limited fashion than in South Korea. With limited resources, preparation of the Chuseok food is challenging. The main activity is to visit their ancestors' grave sites. However, with the extremely poor infrastructure in North Korea, especially in terms of public transportation, make it difficult for people, other than the elite, to visit the grave sites and their families if they are not close by.[16]