Chöd (Tibetan meaning, "cutting through") is an advanced spiritual practice and discipline arising from confluences of Bonpo, Mahasidda, Nyingmapa traditions and now practiced throughout the schools of Tibetan Buddhism. Chöd entwines the traditions of Indian tantric sects with Buddhist esoteric sadhana lineages to offer a syncretistic ritual practice that focuses on symbolic self-sacrifice, intended to engender a fearlessness and victory that are iconographically represented by the kartika, or ritual knife, and the dhvaja, or victory banner, respectively. Additionally, Chöd involves a number of interrelated spiritual practices such as phowa ("death consciousness transmission"), ganachakra ("circle ritual"), paramita ("perfection of virtues"), lojong ("mind training") that connect it to Vajrayana Buddhism and the Bön religion. Though Chöd is not ancestor worship per se it is a spiritual practice and evocation that involves former relatives, preceptors and ancestors. 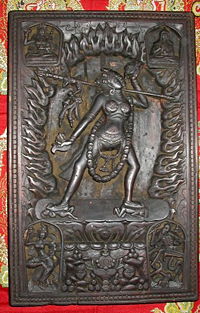 Tibetan Board Carving of Vajrayogini Dakini

Chöd is practiced as a skillful means to cut through hindrances and obscurations that are referred to in Chöd terminology as demons. Examples of demons include karma, ignorance, anger, and in particular the dualism of perceiving the Self as an individual, separate and independent identity to that of the Other. In Dzogchen forms of Chöd, the success of the practice allows the practitioner to abide in the natural state of rigpa free from fear. Chöd is a sadhana that subsumes within its auspice elements of phowa, ganachakra, paramita, lojong[1] gyulu, kyil khor, brahmavihara, ösel and tonglen[2].

In Chöd, the adept symbolically offers the flesh of their body. The iconographic signification of their corporeal form is often represented as skin (the obscuration, surface reality or Maya) flailed from the bones and skeletal structure (the the deep, underlying true reality, the Divine Mindstream), to be severed and cut to pieces and devoured by the gods, dæmons (asura) and wild animals, etc. The ritual is cognate with the prototypical initiation of a shaman though the attributed meaning may differ given tradition. This particular type of sadhana is held to be extremely challenging, potentially dangerous and even contraindicated for certain practitioners.[3]

Chöd, like all tantric systems, has an outer, inner and secret aspects, as per the evocation or mantra that Milarepa sings to Nyama Paldabum:

The Chöd is now a staple of the advanced sadhana of most of the contemporary schools of Tibetan Buddhism and due to the dissemination yielded by the Himalayan diaspora, practiced worldwide.

There is a morality tale, allegory and teaching story inherent within the transmission of Chöd to Tibet that has been culturally remembered as a Cham Dance. In this sacred dance, Moheyan is generally depicted as of ample girth goaded by children.[5] Chöd is a product of both the Indian and Chinese transmissions of Buddhism into the Himalaya. A form of Chod that combined the philosophy of the Prajnaparamita with specific meditation methods and application to the practitioner's daily activities was practiced in India by the Buddhist Mahasiddha, prior to the tenth century.[6]

The Indian tantric transmission may be characterized as "gradual" (Tibetan: rim gyis ‘jug pa; Chinese: tun-wu) and the Chinese Ch'an transmission may be characterized as "direct" (Tibetan: cig car gyi ‘jug pa; Chinese: chien-wu).[7] It needs to be emphasized that this neat dichotomy in characterization of these two approaches to the Dharma, is only valid for the historical context of the great debate between Kamalashila and Mo Ho Yen, arranged by Trisong Detsen and even then it is still open to dialectic. This debate has been named the "Council of Samye" by Giuseppe Tucci but is generally known as the "Council of Lhasa." According to the general Tibetan tradition, the two years of the debate transpired at Samye, a significant distance from Lhasa. According to the lore of the orthodox, prevailing Tibetan cultural tradition, Kamalashila, a mahapandita and scholar educated at Nalanda, advocated the "gradual" process to enlightenment; whereas, Mo Ho Yen, as a trance and meditation master advocated the "direct" awakening of original mind through the nirodha (Sanskrit) of discursive thought, the cessation of the mind of ideation. The historicity of this debate has been drawn into question by Gomez (1983)[8] and Ruegg (1992)[9] though this does not lessen its importance in defining the religious and cultural traditions of Tibet.[10]

One hagiography asserts that that directly after this debate with Mo Ho Yen, as Kamalashila was making his way down from the Himalaya to the Indian lowlands, he was incited to enact phowa ("practice of conscious dying") through compassionate duress, transferring his mindstream to animate a corpse polluted with contagion; and thereby, safely moving the hazard it presented. As the mindstream of Kamalashila was otherwise engaged, a Mahasidda by the name of Padampa Sangye came across the vacant kuten or "physical basis" of Kamalashila. Padampa Sangye, was not karmically blessed with an aesthetic corporeal form, and upon finding the very handsome and healthy empty body of Kamalashila, which he perceived as a newly dead fresh corpse, transferred his mindstream into Kamalashila's body. Padampa Sangye's mindstream in Kamalashila's body continued the ascent to the Himalaya and thereby transmitted the Chöd. The mindstream of Kamalashila upon endeavoring to return to his kuten was unable to do so and resorted by necessity to the vacant body of Padampa Sangye.[11] The mindstream of Padampa Sangye continued in this body, and it is in this body that the transmission of Chod was made to Machig Labdrön.[12] Sources such as Stephen Beyer have described Machig Labdrön as the founder of the practice of Chöd.[13] This is accurate only in so far as she is the founder of the Tibetan Buddhist Mahamudra Chod lineages. Machig Labdrön, provided the practice with its modern nomenclature of "Chöd", but the practice was transmitted to her via other confluent sources such as Mahasiddha and Tantric traditions. Although she established the practice in Tibet, and developed unique approaches to its practice, the core practice did not originate with her.[14]. However, although Machig Labdron founded the Mahamudra lineages of Chod, she did not found the Dzogchen lineages, although they do recognize her, and she does not appear at all in the Bon Chöd lineages.[15]Amongst the elements that came together to form Mahamudra Chod was Dampa Sangye's 'Pacification of Suffering' teachings, which he was the first to teach in Tibet.

Practitioners of Tantric Chöd frequently use a Kangling (thighbone trumpet) and a Chöd drum, a hand drum similar to, but much larger than, a damaru. In a version of the Chöd sadhana of Jigme Lingpa from the Longchen Nyingtik terma, five ritual "stakes" (Tibetan: Phurba; Sanskrit: Vajrakilaya) are employed to demarcate the kyil khor of the offering and to affix the Five Wisdoms (Tibetan: ye shes lgna).[16] Endemic to the iconography of Chöd is the hooked knife or skin flail (Tibetan: gri-gug, Sanskrit: kartika),[17] which is also evident throughout the iconography of the Indian religions.[18]

The polysemic symbol and tantric tool and attribute of the mindstream that the kartika signifies is entwined with the skullcap, anitya and the makara:

"The Kartika (Sanskrit) or curved knife symbolises the cutting of conventional wisdom by the ultimate insight into emptiness. It is usually present as a pair, together with the skullcup, filled with wisdom nectar. On a more simple level, the skull is a reminder of (our) impermanence. Between the knife and the handle is a makara-head, a mythical monster."[19]