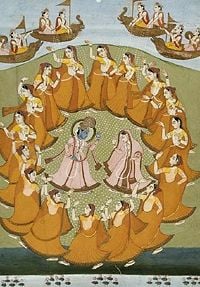 A ganachakra (Sanskrit: gaṇacakra, or 'gathering circle'; Tibetan: tshogs kyi 'khor lo), also known as tsog, ganapuja, chakrapuja or ganachakrapuja, is a generic term for various tantric assemblies or feasts, in which practitioners meet to chant mantra, enact mudra, make votive offerings and practice various tantric rituals as part of a sadhana, or spiritual practice. The ganachakra often comprises a sacramental meal and festivities such as dancing; the feast generally consisting of materials that were considered forbidden or taboo according to the ancient Vedic culture in India, in which the tantric movement arose. As a tantric practice, forms of ganachakra are practiced today in both Hinduism and Vajrayana Buddhism.

The ganachakra, or 'tantric feast', can be seen as a mandala of sacred space. Professor Miranda Shaw summarises the experience of a ganachakra as follows:

The feast is an esoteric ritual that unfolds in many stages. The sacred space for the ceremony is demarcated by geometric designs drawn on the ground with powdered pigments, and an elaborate array of offerings and foods are laid out. The participants don special insignia like bone ornaments and crowns and use musical instruments of archaic design... for inducing heightened awareness. Practitioners sit in a circle and partake of sacramental meat and wine served in skull-cups.The feasts also provide an occasion for the exchange of ritual lore, the ritual worship of women (stripuja), and the performance of sexual yogas. The feast culminates in the performance of tantric dances and music that must never be disclosed to outsiders. The revelers may also improvise "songs of realization" (caryagiti) to express their heightened clarity and blissful raptures in spontaneous verse.[1]

Samual (1998, 126) holds that "...serious Tantric practice is generally seen as appropriate for a small minority only. The ancient Indian gaṇacakra, the circle ritual...discussed earlier, is far in the past. In Tibetan practice it has long been replaced by the gaṇapuja (Tibetan: tshogs), a considerably tamer affair, still involving a sacramental meal but normally performed indoors and without possession or dancing."

Pettit links the importance of the group or gana to the manifestation of the ganachakra and the sacred space or the mandala (in this sense cognate with chakra) with the liturgical tools of mantra, visualisation and sacred architecture:

The potential for sacred space to manifest spontaneously is nowhere higher than in Vajrayana Buddhist practice, which employs the use of mantra and visualization to create an experience of sacredness. Through liturgical performances, or amidst the activities of everyday life, a yogi is to experience, imaginately imaginatively or better yet spontaneously, the presence of divinity—Buddhahood embodied—in his or her own person, companions and environment. These constitute a mandala or sacred architecture which expresses the omnipresence of enlightenment, that is the ground of both "secular" and "sacred" experiences and activities that are never perceived apart from its all-encompassing confines. The invocation of divine presence of mandala is especially effective when undertaken by several people in a ritual context, and it is incumbent for practitioners to do so periodically with a feast-offering known as tsok or, in Sanskrit, ganapuja.[2]

Pettit states that sacred space is created spontaneously wherever the Triple Jewel (cognate with the Gankyil) is manifest and that this sacred architecture or mandala is not dependent upon the built environment of monolithic cultures. "...Sacred Space is created spontaneously wherever the Three Jewels - the Buddha or teacher, the Dharma teaching or its texts, and the Sangha community of practitioners - are found. A place that elicits reverence should be sacred, and wherever the Jewels are found, the pieties of lay and ordained Buddhists are bound to be expressed."[3]

In Hindu tantra, a ganachakra typically consists of five elements known as panchamakara or the "five Ms": madya (wine), mamsa (meat), matsya (fish), mudra (rice or grain), and maithuna (Sanskrit for "union" and coition or yab-yum) a form of tantra.

"Vajrayāna or Tantric Buddhism had its origin in India, where it seems to have been practised, at any rate in its earlier period, say the fourth to eighth centuries CE, by small initiatory cult groups. The central ritual of these groups was the gaṇacakra, a night-time sacramental circle, usually outdoors, often in a cremation ground or similarly spooky and 'powerful' location, with distinctly antinomian elements. These included the ritual use of sexuality, although it is not clear how far this was performed literally and how far symbolically. The gaṇacakra involved possession, dancing and singing, and also magical procedures. It was seen as an occasion to enter a non-ordinary state of consciousness."

Vajranatha (2007)[4] associates the Ganachakra with the "higher tantras" or mysteries , the anuttarayogatantra, and associates a non-monastic origin and tributary of this Mystery Rite to the Mahasiddha tradition which has roots in a complex and coterie of esoteric traditions of numerous Siddha, Yogi, Sadhu and holy peoples of Buddhist, Hindu and non-sectarian practices and views:

The Higher Tantras could not be a congregational practice of monks because Tantric sadhana, as well as celebrations of the High Tantric feast or Ganachakrapuja, required partaking of meat, wine, and sexual intercourse. At the very least the latter two would force a monk to break his vows. And so what came about in the eleventh century was a change in the external style of practice; the Anuttara Tantras, many of them freshly brought from India and newly translated into Tibetan, came to be practiced in the style of the lower Yoga Tantras. Although there is a great deal of ritual in the Yoga Tantras, there is nothing there that would require a monk to violate his monastic vows. The presence of a woman or Dakini is required at High Tantric initiation and also at the Tantric feast of the Ganachakrapuja, but in the eleventh century reform the actual Dakini physically present was replaced by a mind-consort (yid kyi rig-ma), a visualization of the Dakini. One did the sexual practice only in visualization, not in actuality. In this way the practices of the Higher Tantras could be taken into the monasteries and incorporated into the congregations practice and liturgy of the monks known as puja.

In Vajrayana and Dzogchen, it is traditional to offer a tsog to Padmasambhava or other deities, usually gurus on the tenth lunar day and to a form of Dakini such as Yeshe Tsogyal, Mandarava or Vajrayogini on the twenty-fifth lunar day. Generally, participants are required by their samaya (vow) to partake of meat and alcohol, and the rite tends to have elements symbolic of coitus. Traditions of the Ganachakra liturgy and rite extends remains of food and other compassionate offerings to alleviate the insatiable hunger of the hungry ghosts.

Snellgrove (1987) holds that there is a tendency oft-promoted by Tibetan lamas who disseminate teachings in the Western world, to treat references to sexual union and to sadhana that engages with the "five impure substances" (usually referred to as the "five nectars") as symbolic.[5] In the Twilight Language of correspondences and substitutions there is no inconsistency. Although, when modern tantric apologists and scholars employ the term "symbolic" as though no external practices were engaged in literally, they mislead and perpetuate an untruth.[6] Snellgrove (1987) provides an amended translation of his earlier translation of the Hevajra Tantra (II. vii.5-13):

Placing the linga in the bhaga and kissing her again and again, so producing the experience of Great Bliss, the Adamantine One talked about feasting. Now listen, Goddess of wide open eyes, to the matter of feasting in the company-circle, where having feasted, there is such fulfillment (siddhi) which fulfills the substance of all one's desires. One should set about this feasting in a cemetery or a mountain cave, in a resort of nonhuman beings or in a deserted place. One should arrange seats there, reckoned as nine, in the form of corpses or tiger skins or shrouds from a cemetery. The one who embodies Hevajra should be placed in the center of the yoginis, whose places are known, as taught before, in the main directions and intermediate points. Then seated upon one's tiger skin, one should eat the "spiced food" of the sacrament, enjoying it, and one should eat with eagerness the "kingly rice." When one has eaten and eaten again, one should honor the mother-goddesses there and they may be mother or sister or niece or mother-in-law. One should honor them to a high degree and gain fulfillment in their company. The chief lady should offer to the master an unmarred sacred skull filled with liquor, and having made obeisance to him, she should drink it herself. She should hold it in her hands in a lotus-gesture, and present it with the same gesture. Again and again they make obeisance, those winners of fulfillment.[7]

There are many misunderstandings and stereotypes surrounding the Hindu and Buddhist practice of tantra in the Western mindset. One of these lingering stereotypes is that tantra is exclusively about sexual rituals. However, such perceptions are grossly exaggerated and obscure the deeper purpose of tantric ritual and philosophy. The Ganachakra ritual has a deep rooted place in the history of tantric practice, which symbolizes both inclusion and community. The circle is a universal symbol of completion and wholeness. In the tantric context, the circle acts to denote the unity of non-dualism and is itself a type of mandala.

Retrieved from https://www.newworldencyclopedia.org/p/index.php?title=Ganachakra&oldid=1083375
Categories:
Hidden category:
This page was last edited on 22 October 2022, at 19:16.
Content is available under Creative Commons Attribution/Share-Alike License; additional terms may apply. See Terms of Use for details.