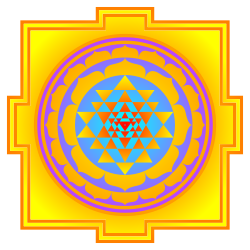 The Sri Yantra symbolizes the ongoing interaction of Shiva and Shakti in the cosmos and their generative power.

Yantra (from the Sanskrit root यन्त्र् yam, meaning "to restrain, curb, check") refers to "any instrument [or machine] for holding, restraining, or fastening, a prop, support, barrier"; "any instrument or apparatus, mechanical contrivance, engine, machine, implement, appliance"; "restraint, force"; "an amulet, mystical diagram supposed to possess occult powers"[1] Additionally, some tantric practitioners employ yantra, mantra and other items in their sadhana, puja and yajna.[2] Yantra, or other permutations and cognate phenomena such as Mandala, Rangoli, Kolam, Rangavalli and other sacred geometrical traditions, are endemic throughout Dharmic Traditions.

Historically, yantras have been used in Hinduism for a variety of purposes as well as devotional and ritualistic functions such as astrological maps of the universe for facilitating liberation, tantric symbols of cosmic unity, sacred geometric diagrams representing divine energy, and even as weapons in warfare.

In its most recognizable form, a yantra is a type of sacred geometry involving a complex system of hallowed religious and cultural values imbued in the fundamental structures and relationships of such complexes as space, time and form. In many religions, the basic patterns of existence are perceived as sacred, for by contemplating and communing with them one becomes aware of divine principles. By studying the nature of these patterns, forms and relationships and their manifold intra- and interconnectivity one may gain insight into the scientific, philosophical, psychological, aesthetic and mystical continuum. That is, the laws and patterns of the Universe.

Sacred geometry is the foundation of the design, architecture, fabrication and construction of sacred structures such as temples, mosques, megaliths, monuments and churches; sacred space such as altars, temenos and tabernacles; places of congregation such as sacred groves, village greens and holy wells and the creation of religious art, iconography and divine proportionality, including mandalas and yantras. 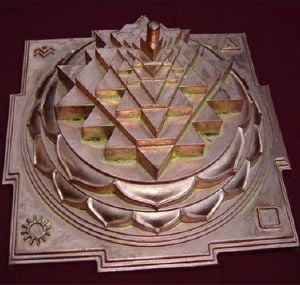 The Sri Yantra (shown here in the three-dimensional projection known as Sri Meru or Maha Meru used mainly in rituals of the Srividya Shakta sects) is central to most Tantric forms of Shaktism.

In Hinduism, the ritual use of the yantra is often tied to the devotion and symbolism of Shaktism. The Sanskrit word Shakti (meaning force, power or energy) refers to the active, creative and dynamic feminine principle in the universe often personified as a Goddess, as well as a God's female aspect or consort. Thus, Shakti embodies the active energy and power of male deities.[3]

In some systems of Hindu thought, Shakti may be worshiped as the Supreme Being and is responsible for the creation of the phenomenal world. Shakti, as both divine energy and as the goddess is of great import within Tantric philosophy and practice.

Together the nine triangles are interlaced in such a way as to form 43 smaller triangles in a web symbolic of the entire cosmos or a womb symbolic of creation. Together they express Advaita or non-duality. This is surrounded by a lotus of eight petals, a lotus of sixteen petals, and an earthsquare resembling a temple with four doors.[4]

The Shri Chakra is also known as the nava chakra because it can also be seen as having nine levels. Each level corresponds to a mudra, a yogini, and a specific form of the deity Tripura Sundari along with her mantra. These levels starting from the outside or bottom layer are:[4]

There are numerous yantra used for a variety of ritual and devotional purposes.Yantras are considered auspicious in Hindu mythology. They can be made out of various objects (i.e. paper, precious stones, metal plates and alloys). They contain geometric items and archetypal shapes and patterns namely squares, triangles, circles and floral patterns; but may also include bija mantra and more complex and detailed symbols. The Bindu is central, core and instrumental to yantra.

One common purpose of yantras is to represent the astronomical position of the planets on a given date and time. Such yantras are constructed on a particular date depending on the prescribed procedures defined under the Vedas. It is believed that if humans constantly concentrate on its specific representation, it will helps to build good fortune, since the planets above have their peculiar gravity that shape basic emotions and karma.

Yantra as portal of communion

Yantras also function in Hinduism as revelatory conduits of cosmic truths. As instruments of spiritual technology, yantras may be envisioned as prototypical and esoteric mapping machines or conceptual looms. Certain yantra are held to embody the energetic signatures of, for example, the Universe, consciousness, ishta-devata.

Some Hindu esoteric practitioners employ yantra, mantra and other items of the saṃdhyā-bhāṣā[5] in their sadhana, puja and yajna. Though often rendered in two dimensions through art, yantra are conceived and conceptualized by practitioners as multi-dimensional sacred architecture and in this quality are identical with their correlate the mandala. Meditation and trance induction with Yantra are invested in the various lineages of their transmission as instruments that potentiate the accretion and manifestation of siddhi.

According to Madhu Khanna, yantras are linked to mantras in order to manifest of divinity:

"Mantras, the Sanskrit syllables inscribed on yantras, are essentially 'thought forms' representing divinities or cosmic powers, which exert their influence by means of sound-vibrations."[6]

Retrieved from https://www.newworldencyclopedia.org/p/index.php?title=Yantra&oldid=1043901
Categories:
Hidden category:
This page was last edited on 15 October 2020, at 03:51.
Content is available under Creative Commons Attribution/Share-Alike License; additional terms may apply. See Terms of Use for details.