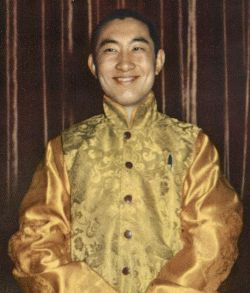 The Panchen Lama (Tibetan: པན་ཆེན་བླ་མ་; Chinese: 班禪喇嘛) is the second-highest-ranking religious figure (after the Dalai Lama) in the Gelugpa (Dge-lugs-pa) sect of Tibetan Buddhism. The Panchen Lama is also considered to be a Tulku who will be reincarnated upon his death. The successive Panchen Lamas are considered to be the incarnations of Amitabha Buddha. Their title, meaning "great scholar," is a Tibetan contraction of the Sanskrit paṇḍita (scholar) and the Tibetan chenpo (great).

The current (eleventh) incarnation of the Panchen Lama is a matter of controversy: the People's Republic of China asserts it is Qoigyijabu, while the Tibetan Government in Exile maintains it is Gedhun Choekyi Nyima, whom they allege to be missing since 1995.

The successive Panchen Lamas form a tulku reincarnation lineage which are said to be the incarnations of Amitābha. The title, meaning "Great Scholar," is a Tibetan contraction of the Sanskrit paṇḍita (scholar) and the Tibetan chenpo (great).

Lobsang Chökyi Gyaltsen (1570–1662), was the first Panchen Lama to be accorded this title during his lifetime. He was the tutor and a close ally of the 5th Dalai Lama, "The Great Fifth," as he is known, pronounced the Panchen to be an incarnation of the celestial buddha Amitābha.[1]

From the name of this monastery, the Europeans referred to the Panchen Lama as the Tashi-Lama (or spelled Tesho-Lama or Teshu-Lama).[2]

Relation to the Dalai Lama lineage

Did you know?
The Panchen Lama is the second highest authority in Tibetan Buddhism, after the Dalai Lama

Choekyi Gyaltsen, the Tenth Panchen Lama, was an important political figure in Tibet following the Fourteenth Dalai Lama's escape to India in 1959. He was enthroned on June 11, 1949, in Amdo (Qinghai) under the auspice of Chinese officials after the KMT administration approved the selection of the reincarnation of the 9th Panchen Lama. However, during the Cultural Revolution in 1968 he was imprisoned; in 1977, he was released but held under house arrest in Beijing until 1982. In 1983, he married a Chinese woman and had a daughter, Yabshi Pan Rinzinwangmo better known as "Renji," highly controversial behavior for a Gelug lama. Although some organizations have criticized the Tenth Panchen Lama as a Chinese puppet, most scholars (and the Fourteenth Dalai Lama) believe that he did the best that he could to help his people in an impossible situation.

In 1989, the Tenth Panchen Lama died suddenly in Shigatse, Tibet at the age of 51, shortly after giving a speech critical of the Chinese occupation. Following his unexpected death, the search for his reincarnation quickly became mired in political controversy. Chadrel Rinpoche, the head of the search committee, was able to secretly communicate with the Dalai Lama. However, after the Dalai Lama announced Gedhun Choekyi Nyima as the new Panchen Lama, Chinese authorities arrested Chadrel Rinpoche, who was replaced with Sengchen Lobsang Gyaltsen. Sengchen had been a political opponent of the previous Panchen Lama. The new search committee decided to ignore the Dalai Lama's announcement and choose the Panchen Lama from a list of finalists, which did not include Gedhun Choekyi Nyima, by drawing lots from the Golden Urn. Gyancain Norbu was announced as the search committee's choice on November 11, 1995.

Retrieved from https://www.newworldencyclopedia.org/p/index.php?title=Panchen_Lama&oldid=1088077
Categories:
Hidden category:
This page was last edited on 18 November 2022, at 06:34.
Content is available under Creative Commons Attribution/Share-Alike License; additional terms may apply. See Terms of Use for details.