For related lunar festivals celebrated on the same day, see Mid-Autumn Festival (across Chinese diaspora and Vietnam) and Chuseok (North and South Korea).

Tsukimi (月見, Tsukimi) or Otsukimi (お月見, Otsukimi), literally meaning, "moon-viewing," also known as Jugoya (十五夜, Jugoya), is the Japanese festival honoring the autumn moon, a variant of the Chinese Mid-Autumn Festival. The festival dates to the Heian era when Japanese aristocrats were influenced by the Chinese custom. The celebration of the full moon typically takes place on the 15th day of the eighth month of the traditional Japanese calendar; the waxing moon is celebrated on the 13th day of the ninth month. These days normally fall in September and October of the modern solar calendar.

Traditionally in Japan, moon viewing was a way of honoring the moon and expressing gratitude for a good harvest and hopes for similar bounty in the future. The celebration is now so popular in Japan that some people repeat the activities for several evenings following the appearance of the full moon during the eighth lunisolar month.

Tsukimi refers to the Japanese tradition of holding parties to view the harvest moon. The custom is thought to have originated with Japanese aristocrats during the Heian period who were influenced by the Chinese custom of Mid-Autumn Festival.[1]

The full moon appeared on the fifteenth night (jūgoya) of each month according to the old lunar calendar. The best night for observing the moon is said to be the fifteenth night of the eighth month of the lunar calendar, known as jūgoya no tsukimi. This date is the exact midpoint of the autumn season (reckoned from the seventh to ninth month), and was called chūshū (mid-autumn). The full moon that night may also be called chūshū no meigetsu (the mid-autumn moon).[2] 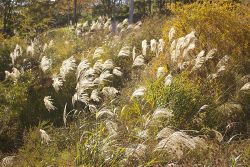 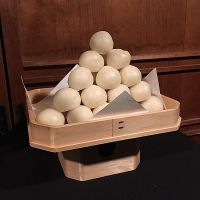 Traditionally, moon viewing was a way of expressing gratitude for a good harvest and hopes for similar bounty in the future. On the evening of the full moon, it is traditional to gather in a place where the moon can be seen clearly, and to decorate the scene with Japanese pampas grass (Miscanthus sinensis, the maiden silvergrass, also known as Susuki grass). Japanese pampas grass is common in Japan in autumn, and is believed to be a token of the moon god, who guards the crops and exorcises evil spirits. Decorating with pampas grass is accompanied with prayers for a good harvest and protection from evil spirits.

White rice dumplings (known as Tsukimi dango), taro, edamame, chestnuts and other seasonal foods are served with sake as offerings to the moon in order to pray for an abundant harvest. In particular, the dango are arranged to form a pyramid as an offering to the moon. These dishes are known collectively as Tsukimi dishes (月見料理, tsukimi ryōri). Due to the ubiquity of sweet potato or taro among these dishes, the tradition is known as Imomeigetsu (芋名月, Imomeigetsu) or "Potato harvest moon" in some parts of Japan.

During the Heian period elements of the Chinese Mid-Autumn Festival were introduced to Japan. Members of the aristocratic class would hold moon-viewing events aboard boats in order to view the moon's reflection on the surface of the water. The writing of tanka poetry was also an element of such mid-autumn moon viewing festivities.

Tsukimi traditions include displaying decorations made from Japanese pampas grass and eating rice dumplings called Tsukimi dango in order to celebrate the beauty of the moon.[3] Seasonal produce are also displayed as offerings to the moon. Sweet potatoes are offered to the full moon, while beans or chestnuts are offered to the waxing moon the following month. The alternate names of the celebrations, Imomeigetsu (literally "potato harvest moon") and Mamemeigetsu ("bean harvest moon") or Kurimeigetsu ("chestnut harvest moon") are derived from these offerings.

It is traditional to serve Tsukimi dango and seasonal produce offerings during Tsukimi, as described above. Confectionery, such as Mooncakes, are also enjoyed.

It used to be customary to forgive children who stole the dumplings and fruits offered during moon-viewing. Rather than scold the children, the adults said they were glad the gods liked the food so much that they ate it all. Today this tradition may have disappeared, although children may enjoy eating the offering foods after the moon-viewing.[4] Today a number of foods are sold in restaurants as "Tsukimi" foods: Boiled soba or udon noodles topped with nori and raw egg, then covered with broth are known as Tsukimi soba (月見そば) or Tsukimi udon (月見うどん). The rich yellow of the egg yolk resembles the full moon.[5] In Kitakyushu an egg served atop yaki udon is known as Tenmado, another name for Tsukimi in the local dialect. Similarly when a raw quail egg is used to top sushi, like battleship sushi gunkanzushi or a handroll temaki, it is referred to as tsukimi style.

At some fast food restaurants in Japan a special Fall Menu is offered during September and October featuring fried egg sandwiches known as Tsukimi burgers.

Several temples and other public places in Japan hold Tsukimi festivals. The following are some notable examples.

Daikaku-ji Temple in Kyoto, originally built as for the Emperor, holds moon viewing parties at its artificial lake, Osawa Pond, each year. The tradition began when Emperor Saga hosted a party for his court on his dragon-shaped royal boat on this pond. Today visitors enjoy viewing the moon reflected in the calm surface of the water as they ride a boat across the pond. There is also an altar and Buddhist service held in the evening under the moon.[6]

Ishiyama-dera Temple ("Stony Mountain Temple") in the Shiga prefecture holds a Tsukimi celebration in which lanterns and candles are placed around the grounds to light the way, as well as make beautiful designs. Carved bamboo shoots are also used to hold candles. The festival also features live performances and servings of Tsukimi-dango.[7]

Tokyo Tower is lit for the occasion and open for extended hours to allow the public to enjoy moon viewing from above the city. Also, Tokyo Skytree is open and offers live entertainment along with moon viewing.

Retrieved from https://www.newworldencyclopedia.org/p/index.php?title=Tsukimi&oldid=1034375
Categories:
Hidden category:
This page was last edited on 27 March 2020, at 21:21.
Content is available under Creative Commons Attribution/Share-Alike License; additional terms may apply. See Terms of Use for details.