Chopsticks are a pair of small even-length tapered sticks used as the traditional eating utensils of China, Japan, Korea, Taiwan, Vietnam, and Thailand. Generally believed to have originated in ancient China, they can also be found in some areas of Tibet and Nepal that are close to Han Chinese populations. The pair of sticks is maneuvered in one hand, between the thumb and fingers, and used to pick up pieces of food. Chopsticks are typically about 25.4 cm (10 inches) long and .6 cm (¼ inch) thick at the top, gradually narrowing to a blunt or pointed tip at the base. They are made from a variety of materials including bamboo, plastic, various types of wood, bone, gold, silver, stainless steel and other metals, horn, jade, coral and ivory. Long chopsticks made of wood or bamboo are used for cooking.

Chopsticks originated in ancient China as early as the Shang dynasty (1750-1040 B.C.E.)[1] and were widely used throughout East Asia. The earliest evidence of a pair of chopsticks made out of bronze was excavated from Yin Ruins's Tomb 1005 at Houjiazhuang, Anyang, Henan, dated roughly 1200 B.C.E.[2] The earliest extant bronze chopsticks were excavated in sites dating from the fifth century B.C.E. (late Eastern Zhou to early Warring States periods). It is not clear whether these were used for eating utensils or as cooking utensils. There are references to chopsticks in the Qu Li section of the Book of Rites (Liji, c. late Zhou period). They are represented by a Chinese character that depicts a man holding two pieces of bamboo.[3]

Tools resembling chopsticks were also unearthed in the archaeological site Megiddo in Israel; this discovery may indicate the existence of a trade relationship between the Middle East and Asia in early antiquity or may be an independent parallel development. Chopsticks were also common household items of civilized Uyghurs on the Mongolian steppes during the sixth–eighth centuries.[4]

Chopsticks have long been the primary eating utensil in China, Japan, Korea and Vietnam. The limited use of chopsticks spread to other Asian countries in recent centuries with the arrival of Chinese immigrants in Southeast Asia, where food had traditionally been eaten with the hands. In countries such as Thailand, chopsticks are used almost exclusively to eat noodle dishes, while rice and other foods are generally eaten with a spoon or Western fork.

The Mandarin Chinese word for chopsticks is kuàizi ( 筷子). 筷 is a semantic-phonetic (xíngshēng) compound with a phonetic part of "快," which means quick, and a semantic part, 竹, meaning bamboo. In Chinese, the old word for "chopsticks," and also in some varieties of modern Chinese such as Hokkien, was zhù (MC: d̪jwo-) (箸 Pinyin:zhù, Minnan: tī). However, zhù became a taboo on ships because it sounded the same as another word meaning "to stop" (住). Consequently, it was replaced by a word of opposite meaning, kuài (fast, quick). This gradually spread until it became the word for "chopsticks" in most varieties of modern Chinese. The character for this new meaning of "chopsticks" (筷) for kuài has the semantic element of bamboo added to the character meaning "fast" kuài (快).[5] In Cantonese or Guangzhou dialect, kuàizi or “faai jee” means “quick little boys.”

In Japanese, chopsticks are called hashi, written 箸. They are also known as otemoto (おてもと, otemoto), a phrase commonly printed on the wrappers of disposable chopsticks.

In Korean, 箸 (jeo) is used in the compound jeotgarak (젓가락) which is composed of jeo (chopsticks) and garak (stick). Jeo cannot be used alone.

In Vietnamese, chopsticks are called "đũa," also from 箸.

The English word "chopstick" seems to have been derived from "chop chop" which meant “quickly quickly” in Chinese Pidgin English.[6][7] Only the smaller ends of chopsticks contact the food. Here chopsticks are being used to eat a Japanese dish known as Natto, made from fermented soybeans.

Many rules of etiquette govern the proper conduct of the use of chopsticks. Held between the thumb and fingers of one hand, chopsticks are used tong-like to pick up portions of food, which are prepared and brought to the table in small and convenient pieces. Chopsticks may also be used (except in Korea) as means for sweeping rice and other nominal morsels into the mouth directly from the bowl.

Chopsticks are traditionally held in the right hand only, even by left-handed people. Although chopsticks may now be found in either hand, a few still consider left-handed chopstick use as improper etiquette. Some historians believe this rule of etiquette originated from a Chinese legend.

In chopstick-using cultures, foods that cannot be easily separated with chopsticks are generally cut into small, bite-sized pieces during preparation. Some chopstick designs have carved rings encircling the tips to aid in grasping larger pieces of food.

Rice, which would be nearly impossible to eat with chopsticks if prepared using Western methods, is usually prepared in East Asia with less water, leading to "clumping" of the rice conducive to eating with chopsticks. The primary cultivar of rice used in East Asian countries is japonica, which clumps together more easily than indica, the rice used in most Western and South Asian countries. The short-grained “sticky” varieties of rice (Oryza sativa var. japonica) in Japan and Korea are easily lifted from the table to the mouth with chopsticks, while Chinese varieties require the rice bowl to be brought close to the mouth when using chopsticks, which are used with a raking motion.

Very long chopsticks, usually about 30 or 40 cm (11.8 to 15.7 inches), called saibashi (菜箸) in Japan, are used for cooking, especially for deep frying foods, or for serving. Shorter chopsticks are generally used as eating utensils but are also used for cooking.

Chopsticks are made from a variety of materials including bamboo, plastic, wood, bone, gold, silver, stainless steel and other metals, horn, jade, coral and ivory. Wood and bamboo chopsticks are used for cooking because they are inexpensive, withstand high temperatures, and do not alter the taste of food. The matter surfaces of bamboo and wood chopsticks provide a good grip for holding food, but they can warp and deteriorate with continued use. Natural wood chopsticks, like natural wood food preparation surfaces, have an innate antibacterial property absent in other materials. Lacquering or applying oil or paint to the wood surface reduces the antibacterial effectiveness.[8]

Almost all disposable chopsticks are made of either bamboo or wood. Disposable unlacquered chopsticks are used especially in restaurants. These often come as a piece of wood which is partially cut and must be broken into two chopsticks by the user (demonstrating that they have not been previously used). In Japanese, these are known as waribashi (割り箸).

Metal and stainless steel chopsticks are durable and are easy to clean and sanitize. Like plastic chopsticks, metal chopsticks are more slippery than wood or bone chopsticks. They also tend to be more expensive. They conduct heat easily and are not as comfortable to use as cooking utensils. Metal chopsticks are sometimes roughened or scribed on the tapered end to make them less slippery when picking up foods.

Materials such as ivory, jade, coral, gold, and silver are typically used to make expensive and valuable chopsticks for special occasions. Wooden or bamboo chopsticks can be painted or lacquered to decorate them and make them waterproof, and inlaid with ivory and gold. Silver and gold chopstick pairs are sometimes connected by a short chain at the untapered end to prevent their separation. 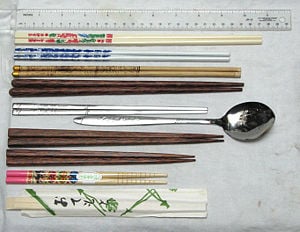 Tip: Chopsticks generally should be held at the thicker end about a third along their length for balance and efficiency. For greater reach to pick up food further away on the table, hold the chopsticks at the upper ends.

If the tips fail to line up, it will be difficult to hold things. Hold the chopsticks upright with one of the tips lightly touching the table, and gently push the chopsticks down or gently loosen your grip for a moment to let both tips become equal in length. You can also adjust your grip or holding position this way.

With practice, it is possible to perform step one and two simultaneously, on picking up the chopsticks with one hand, with a single fluid and seamless motion. Adjust your grip if necessary.

Chopsticks are used in many parts of Asia. While principles of chopstick etiquette are similar, the finer points may differ from region to region, and there is no single standard for the use of chopsticks. Generally, chopsticks etiquette is similar to general Western etiquette regarding eating utensils.

Explosive growth in the use of disposable chopsticks in restaurants and even in homes, compounded by expanding populations of migrant workers in Asian cities who rely daily on restaurant meals served with disposable chopsticks, has made a serious impact on the environment. In China alone, an estimated 45 billion pairs of disposable chopsticks are used and thrown away annually, adding up to 1.7 million cubic meters of timber or 25 million fully grown trees every year. A study by a Japanese environmentalist organization found that 90 percent of the wood used for disposable chopsticks used in Japan is imported from Mainland China, and that entire mountains in Northern China are being logged to provide wood for chopsticks. Instead of replanting trees, Chinese peasants have been using the cleared land for agriculture, leading to rapid deforestation and erosion.[10]

To encourage the Chinese people to use and throw away less, a 5 percent tax[11] was added to the price of chopsticks in China in April 2006. This measure was part of the first tax package in 12 years. A number of initiatives to reduce the use of disposable wooden chopsticks are underway in Asian countries, including education of the public, programs in which restaurants collect used chopsticks for recycling instead of throwing them away, legislation to enforce the use of re-usable plastic or stainless steel chopsticks in institutions and public restaurants, and popular movements encouraging individuals to carry their own personal sets of chopsticks in purses and pockets to use in restaurants and offices instead of disposable chopsticks. [12] [13]

A 2003 study found that regular use of chopsticks may slightly increase the risk of osteoarthritis in the hand, a condition where cartilage gets worn off, leading to pain in the hand joints, particularly among the elderly.[14]There have also been concerns regarding the use of certain disposable chopsticks made from inferior dark wood bleached white that may pose a health risk, causing coughing or even leading to asthma. [15]

Retrieved from https://www.newworldencyclopedia.org/p/index.php?title=Chopsticks&oldid=1031585
Categories:
Hidden category:
This page was last edited on 27 January 2020, at 21:08.
Content is available under Creative Commons Attribution/Share-Alike License; additional terms may apply. See Terms of Use for details.