Earning international acclaim, his work has been interpreted as Surrealism, a sandbox for the subconscious mind, a re-creation of the childlike, and a manifestation of Catalan pride. Surrealism is a cultural movement that began in the mid-1920s, and is best known for the visual artworks and writings of the group members. From the Dada activities of World War I Surrealism was formed with the most important center of the movement in Paris and from the 1920s spreading around the globe.

The works feature the element of surprise, unexpected juxtapositions and the use of non sequiturs. Many Surrealist artists and writers regard their work as an expression of the philosophical movement first and foremost with the works serving merely as an artefact.

In numerous interviews dating from the 1930s onwards, Miró expressed contempt for conventional painting methods as a way of supporting bourgeoise society, and famously declared an "assassination of painting" in favor of upsetting the visual elements of established painting.

Born to the families of a goldsmith and watchmaker, the young Miró was drawn towards the arts community that was gathering in Montparnasse and in 1920 moved to Paris, France. There, under the influence of the poets and writers, he developed his unique style: organic forms and flattened picture planes drawn with a sharp line. Generally thought of as a Surrealist because of his interest in automatism and the use of sexual symbols (for example, ovoids with wavy lines emanating from them), Miró’s style was influenced in varying degrees by Surrealism and Dada,[1] yet he rejected membership to any artistic movement in the interwar European years. André Breton, the founder of Surrealism, described him as "the most Surrealist of us all." Miró confessed to creating one of his most famous works, Harlequin's Carnival, under similar circumstances:

"How did I think up my drawings and my ideas for painting? Well I'd come home to my Paris studio in Rue Blomet at night, I'd go to bed, and sometimes I hadn't any supper. I saw things, and I jotted them down in a notebook. I saw shapes on the ceiling..."[2]

In 1926, he collaborated with Max Ernst on designs for Sergei Diaghilev and the Ballet Russes. With Miró's help, Ernst pioneered the technique of grattage, in which he troweled pigment onto his canvases. Miró married Pilar Juncosa in Palma de Mallorca on October 12, 1929; their daughter Dolores was born July 17, 1931. Shuzo Takiguchi published the first monograph on Miró in 1940. In 1948-1949, although living in Barcelona, Miró made frequent visits to Paris to work on printing techniques at the Mourlot Studios (lithographs) and at the Atelier Lacourière (engravings). A close relationship lasting forty years developed with the printer Fernand Mourlot, resulting in the production of over 1,000 different lithographic editions.

In 1959, André Breton asked Miró to represent Spain in The Homage to Surrealism exhibition together with works by Enrique Tábara, Salvador Dalí, and Eugenio Granell. Miró created a series of sculptures and ceramics for the garden of the Maeght Foundation[3] in Saint-Paul-en-Forêt, France, which was completed in 1964.

Miró was among the first artists to develop automatic drawing as a way to undo previous established techniques in painting, and thus, with André Masson, represented the beginning of Surrealism as an art movement. Automatic drawing was developed as a means of expressing the subconscious or, more specifically the Freudian unconscious. In automatic drawing, the hand is allowed to move 'randomly' across the paper. In applying chance and accident to mark-making, drawing is to a large extent freed of rational control. Hence the drawing produced may be attributed in part to the subconscious and may reveal something of the psyche, which would otherwise be repressed.

Automatic drawing was pioneered by André Masson and then by Miró and Surrealists like Salvador Dalí, Jean Arp and André Breton. The technique was transferred to painting (as seen in Miró's paintings which often started out as automatic drawings), and has been adapted to other media; there have even been automatic "drawings" in computer graphics. Pablo Picasso was also thought to have expressed a type of automatic drawing in his later work, and particularly in his etchings and lithographic suites of the 1960s.

Most of the surrealists' automatic drawings were illusionistic, or more precisely, they developed into such drawings when representational forms seemed to suggest themselves. The surrealist artists often found that their use of 'automatic drawing' was not entirely automatic, rather it involved some form of conscious intervention to make the image or painting visually acceptable or comprehensible, "...Masson admitted that his 'automatic' imagery involved a two-fold process of unconscious and conscious activity...."[4]

Miró chose not to become an official member of the Surrealists in order to be free to experiment with other artistic styles without compromising his position within the group. He pursued his own interests in the art world, beginning with automatic drawing and surrealism but encompassing expressionism and Color Field painting.

Miró's oft-quoted interest in the assassination of painting is derived from a dislike of bourgeois art of any kind, used as a way to promote propaganda and cultural identity among the wealthy.[5] Specifically, Miró responded to Cubism in this way, which by the time of his quote had become an established art form in France. He is quoted as saying "I will break their guitar," referring to Picasso's paintings, with the intent to attack the popularity and appropriation of Picasso's art by politics.[6]

In an interview with biographer Walter Erben, Miró expressed his dislike for art critics, saying, they "are more concerned with being philosophers than anything else. They form a preconceived opinion, then they look at the work of art. Painting merely serves as a cloak in which to wrap their emaciated philosophical systems."

In his final decades Miró accelerated his work in different media, producing hundreds of ceramics, including the Wall of the Moon and Wall of the Sun at the UNESCO building in Paris. He also made temporary window paintings (on glass) for an exhibit. In the last years of his life Miró wrote his most radical and least known ideas, exploring the possibilities of gas sculpture and four-dimensional painting.

In 1981, Miró's The Sun, the Moon and One Star—later renamed Miró's Chicago—was unveiled. This large, mixed media sculpture is situated outdoors in the downtown Loop area of Chicago, across the street from another large public sculpture, the Chicago Picasso. Miró had created a bronze model of The Sun, the Moon and One Star in 1967. The model now resides in the Milwaukee Art Museum.

One of Miró’s most important works in the United States is his only glass mosaic mural, Personnage Oiseaux[8] (Bird Characters), 1972-1978. Miró created it specifically for Wichita State University’s Edwin A. Ulrich Museum of Art,[9] Kansas. The mural is one of Miró’s largest two-dimensional projects, undertaken when he was 79 and completed when he was 85 years of age.[10] Fabrication of the mural was actually completed in 1977, but Miró did not consider it finished until the installation was complete.[11]

The glass mosaic was the first for Miró. Although he wanted to do others, time was against him and he was not able. He was to come to the dedication of the mural in 1978, but he fell at his studio in Palma de Mallorca, Spain, and was unable to travel. His island home and studio in Mallorca served him from 1956 until his death in 1983.

The entire south wall of the Ulrich Museum is the foundation for the 28 ft by 52 ft (8.53 m x 15.85 m) mural, comprised of one million pieces of marble and Venetian glass mounted on specially treated wood, attached to the concrete wall on an aluminum grid. A gift of the artist, donor groups paid for the fabrication by Ateliers Loire[12] of Chartres, France, and for its installation. The Ulrich Museum also acquired the 5 ½ ft by 12 ft oil on canvas maquette for the mural, but it has since been sold to establish a fund to support the museum’s acquisitions and any repairs needed to the mural. The entire mural was originally assembled by one artisan at Ateliers Loire using Miró’s maquette as a guide. 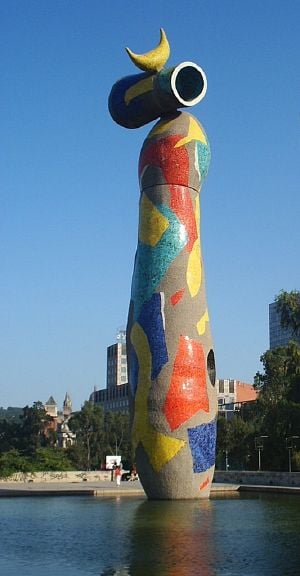 Fabricated under Miró’s personal direction and completed in 1977, the 40 panels comprising the mural were shipped to WSU, and the mural was installed on the Ulrich Museum’s façade in 1978. Although it has received little recognition, the mural is a seminal work in the artist’s career–one of Miró’s largest two-dimensional works in North America and the only type of its kind by the artist.[10]

He died bedridden at his home in Palma, Mallorca on December 25, 1983.[13] He suffered from heart disease and had visited a clinic for respiratory problems two weeks before his death.[14]

Many of his pieces are exhibited today in the National Gallery of Art in Washington and Fundació Joan Miró in Montjuïc, Barcelona; his body is buried nearby, at the Montjuïc cemetery. 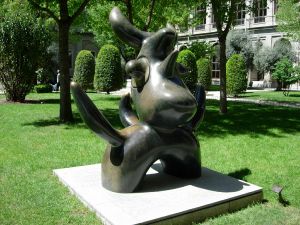 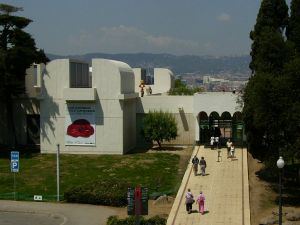 Joan Miró i Ferrà won several awards in his lifetime. In 1954 he was given the Venice Biennale print making prize, in 1958 the Guggenheim International Award,[17] and in 1980 he received the Gold Medal of Fine Arts from King Juan Carlos of Spain.[18] Miró received a doctorate honoris causa in 1979 from the University of Barcelona.

In 1981, the Palma de Mallorca City Council established the Fundació Pilar i Joan Miró a Mallorca, housed in the four studios that Miró had donated for the purpose.[19]

The building housing the museum is itself a notable example of modern design drawing from regional traditions. It was completed in 1975 by architect Josep Lluís Sert, who conceived it like an open space, with big terraces and interior courtyards that allowed a correct circulation of the visitors. The building was broadened in 1986 to add the library and the auditorium.

The Foundation has also a space named "Espai 13," dedicated especially to promote the work of young artists who experiment with the art. Also temporary exhibitions of works of other painters are carried out. Moreover, the foundation carries out itinerant exhibitions to introduce the work of the Spanish artist.

Retrieved from https://www.newworldencyclopedia.org/p/index.php?title=Joan_Miro&oldid=1074897
Categories:
Hidden category:
This page was last edited on 1 August 2022, at 13:41.
Content is available under Creative Commons Attribution/Share-Alike License; additional terms may apply. See Terms of Use for details.