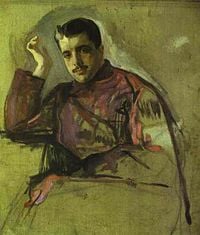 Diaghilev in 1909, by Valentin Aleksandrovich Serov

Sergei Pavlovich Diaghilev (Russian: Серге́й Па́влович Дя́гилев Sergej Pavlovič Dâgilev), also referred to as Serge, (March 31, 1872 – August 19, 1929) was a Russian art critic, patron, ballet impresario and founder of the Ballets Russes from which many famous dancers and choreographers would later arise. It sprang out of the Tsar's Imperial Ballet of St. Petersburg, from where all its dancers were associated and trained, and the influence of the great choreographer Marius Petipa. It created a sensation in Western Europe because of the great vitality of Russian ballet compared to what was current in France at the time. It became the most influential ballet company in the twentieth century, and that influence, in one form or another, has lasted to this day. Despite his genius, what he finally offered is clearly diminished by his bondage to his own self-indulgence.

Sergei Diaghilev was born to a wealthy family in Perm, Russia toward the end of its age of empire. Sent to the capital to study law at Saint Petersburg University, he ended up also taking classes at the St. Petersburg Conservatory of Music where he studied singing and music (a love of which he had picked up from his stepmother). Upon graduating in 1892 he abandoned his dreams of composition (his professor, Nikolai Rimsky-Korsakov, told him he had no talent for music), when he came into an influential circle of artists later referred to as the Pickwickians: Alexander Benois, Walter Nouvel, Konstantin Somov, Vladimir Dmitrievitch Filosofov and Léon Bakst. Although not instantly received into the group, Benois aided Diaghilev by developing his knowledge of Russian and Western Art. In two years time, he had voraciously absorbed this new obsession (even travelling abroad to further his studies) and came to be respected as one of the most learned of the group.

With financial backing from Savva Mamontov (the director of the Bolshoi) and Princess Maria Tenisheva, the group founded the journal Mir Iskusstva (World of Art) in 1898. The journal introduced current trends in Western art and spotlighted Russian artists who, in the eyes of the group, demonstrated extraordinary creativity and originality. Mir Iskutstva lasted for six years and made a noticeable impact on the development of Russian art, as well as Russian consciousness.

In 1899, Diaghilev became special assistant to Prince Sergei Mikhailovitch Volkonsky, who had recently taken over directorship of all Imperial theaters. Diaghilev was soon responsible for the production of the Annual of the Imperial Theaters in 1900, and promptly offered assignments to his close friends. Léon Bakst would design costumes for the French play Le Coeur de la Marquise, while Benois was given the opportunity to produce Sergei Taneyev's opera Cupid's Revenge. 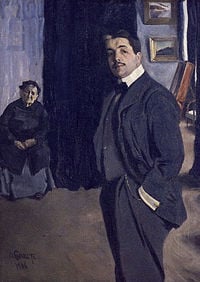 Having taken a recent interest in the world of Ballet, Diaghilev pushed for a revival of Léo Delibes' ballet Sylvia, a favorite of Benois'. The two collaborators concocted an elaborate production plan that startled the established personnel of the Imperial Theaters. After several increasingly antagonistic differences of opinion, Diaghilev was asked to resign in 1901 and left disgraced in the eyes of the nobility. 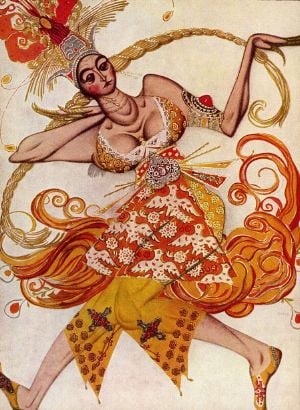 Diaghilev's friends stayed true, following him and helping to put on exhibitions. In 1905 he mounted an exhibition of Russian portrait painting in St Petersburg and in the following year took a major exhibition of Russian art to the Petit Palais in Paris. It was the beginning of a long involvement with France. In 1907 he presented five concerts of Russian music in Paris, and in 1908 mounted a production of Boris Godunov, starring Fyodor Chaliapin, at the Paris Opera.

This led to an invitation to return the following year with ballet as well as opera, and thus to the launching of his famous Ballets Russes. The Ballets Russes was a established in 1909, residing first in Théâtre Mogador, Paris; and then in Monte Carlo. It sprang out of the Tsar's Imperial Ballet of St. Petersburg, from where all its dancers were associated and trained, under the influence of the great choreographer, Marius Petipa. It created a sensation in Western Europe because of the great vitality of Russian ballet compared to what was current in France at the time. It became the most influential ballet company in twentieth century, and that influence, in one form or another, has lasted to this day. The company included the best young Russian dancers, among them Anna Pavlova and Vaslav Nijinsky; their first night on May 19, 1909, was a sensation.

During these years Diaghilev's stagings included several compositions by the late Nikolai Rimsky-Korsakov, such as the operas Maid of Pskov, May Night, and The Golden Cockerel. His balletic adaptation of the orchestral suite Schéhérazade, staged in 1910, drew the ire of the composer's widow, Nadezhda Rimskaya-Korsakova, who protested in open letters to Diaghilev published in the periodical Reč'.

The artistic director for the Ballets Russes was Léon Bakst. Together they developed a more complicated form of ballet with show-elements intended to appeal to the general public, rather than solely the aristocracy. The exotic appeal of the Ballets Russes had an effect on Fauvist painters and the nascent Art Deco style.

Perhaps Diaghilev's most notable composer collaborator, however, was Igor Stravinsky. Diaghilev heard Stravinsky's early orchestral works Fireworks and Scherzo Fantastique, and was impressed enough to ask Stravinsky to arrange some pieces by Frédéric Chopin for the Ballets Russes. In 1910, he commissioned his first score from Stravinsky, The Firebird. Petrushka (1911) and The Rite of Spring (1913) followed shortly afterwards, and the two also worked together on Pulcinella (1920) and Les Noces (1923).

Diaghilev staged “The Sleeping Beauty” of Tchaikovsky in London in 1921; despite being well received by the public it was not a financial success. The first cast included the legendary ballerina Olga Spessivtseva. Diaghilev insisted on calling the ballet The Sleeping Princess. When asked why, he quipped, "Because I have no beauties!" The later years of the Ballets Russes were often considered too "intellectual," too "stylish" and seldom had the unconditional success of the first few seasons, although younger choreographers like George Balanchine hit their stride with the Ballet Russes.

The end of the nineteenth century brought a development towards more freedom in the handling of tonality, harmony, rhythm and meter. Until that time, rigid harmonic schemes had forced rhythmic patterns to stay fairly uncomplicated. Around the turn of the century, however, harmonic and metric devices became either more rigid, or much more unpredictable, and each approach had a liberating effect on rhythm, which also affected ballet. Diaghilev was a pioneer in adapting these new musical styles to modern ballet. When Ravel used a 5/4 time in the final part of his ballet Daphnis et Chloé (1912), dancers of the Ballets Russes sang Ser-ge-dia-ghi-lev during rehearsals to keep the correct rhythm. 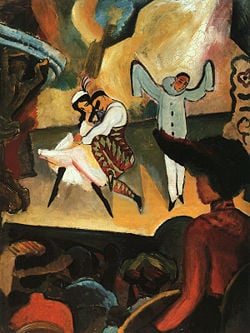 Russian Ballet, by August Macke (1912). The ballet being danced appears to be Carnaval.

End of the Diaghilev era

After Diaghilev's death in 1929 the company's property was claimed by creditors, and the dancers were scattered. In the subsequent years, the company (in name only) was revived as the Ballet Russe de Monte Carlo (with which the names of George Balanchine and Tamara Toumanova are associated) and as the Original Ballet Russe.

Diaghilev engaged in a number of homosexual relationships over the course of his life—among others with Boris Kochno, his secretary from 1921 until the end of his life, with his cousin, Dima Filasofov, and at least four dancers in his ballet company, Vaslav Nijinsky, Leonide Massine, Anton Dolin, and Serge Lifar.

Diaghilev was known as a hard, demanding, even frightening taskmaster. Ninette de Valois, no shrinking violet, said she was too afraid to ever look at him in the face. George Balanchine said he carried around a cane during rehearsals, and banged it angrily when he was displeased. Other dancers said he would shoot them down with one look, or a cold comment.

Diaghilev dismissed Nijinsky summarily from the Ballets Russes after his marriage in 1913, and they never met again. Dancers such as Alicia Markova, Tamara Karsavina, Serge Lifar, and Lydia Sokolova remembered him fondly, as a stern but kind father-figure who put the needs of his dancers and company above his own. As Lifar said, he died with two coats, and practically no money in his bank account. He lived from paycheck to paycheck to finance his company. Markova was very young when she joined the Ballet Russes and she would later in life say that she called Diaghilev "Sergypops" and he would take care of her like a daughter. The movie The Red Shoes is a thinly disguised dramatization of the Ballet Russes.

Retrieved from https://www.newworldencyclopedia.org/p/index.php?title=Sergei_Diaghilev&oldid=1098025
Categories:
This page was last edited on 26 January 2023, at 09:57.
Content is available under Creative Commons Attribution/Share-Alike License; additional terms may apply. See Terms of Use for details.