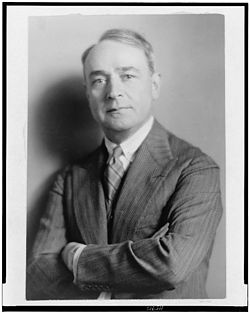 Dr. Sergei Aleksandrovich Koussevitzky (Koussevitsky) (Russian: Сергей Александрович Кусевицкий) (July 26, 1874 – June 4, 1951), or Serge, was a Russian-born conductor, composer, and double-bassist best known for his long tenure as music director of the Boston Symphony Orchestra from 1924 to 1949.

Serge Koussevitsky's legacy as a conductor and educator remain important aspects of his artistic life. By establishing the Tanglewood Insitute of Music in 1940 he sought to encourage the professional musicians of the Boston Symphony to impart their expertise and experience to young musicians in their formative years. By taking the role of a mentor to younger musicians he set an example of a musician who clearly lived for the sake of others.

Koussevitzky was born into a poor Jewish family, growing up in Vyshny Volochyok, Tver Oblast, about 250 km northwest of Moscow. His parents were professional musicians who taught him violin, cello, and piano. At the age of fourteen he received a scholarship to the Musico-Dramatic Institute in Moscow for the study of double bass and music theory. He excelled at the bass, joining the Bolshoi Theatre orchestra at the age of twenty and succeeding his teacher as the principal bassist at twenty-seven. In 1901, he made his debut as a soloist in Moscow, and won critical acclaim for his first Berlin recital in 1903. In 1902 he married his first wife, the dancer Nadezhda Galat. The same year he wrote a popular concerto for the double bass. Koussevitzky divorced his first wife[1] and married Natalie Ushkov, the daughter of an extremely wealthy tea merchant, in 1905. At some time before this he had converted from Judaism to Christianity.[2] The couple moved to Germany. In Berlin Sergei studied conducting under Arthur Nikisch, using his new-found wealth to pay off his teacher's gambling debts.[3]

In 1908 Koussevitzky made his professional debut as a conductor, hiring and leading a concert with the Berlin Philharmonic Orchestra. The next year he founded his own orchestra in Moscow and branched out into the publishing business, forming his own firm and buying the catalogues of many of the greatest composers of the age. Among the composers published by Koussevitzky were Scriabin, Prokofiev, Stravinsky and Medtner. During the period 1909 to 1920 he established himself as a brilliant conductor in Europe. After the Russian Revolution, he returned to his homeland for a brief time to conduct the State Symphony Orchestra of Petrograd; in 1920, he made his way to Paris, where he organized the Concerts Koussevitzky, presenting new works by Prokofiev, Stravinsky, and Ravel. In 1924 he moved to the United States, and would become a citizen in 1941.

He was appointed conductor of the Boston Symphony Orchestra in 1924, beginning a golden era for the ensemble that would continue until 1949. Over the next twenty-five years, he continued building the ensemble's reputation as a leading American orchestra, and developing its summer concert and educational programs at Tanglewood. With the Boston Symphony he made numerous recordings, some of which are available on compact disc. Most of his recordings have been well-regarded by critics. His students and protégés included Leonard Bernstein and Sarah Caldwell. Bernstein guest conducted the Boston Symphony, including the 1951 world premiere of Charles Ives' second symphony. Ironically, Bernstein's very last concert, in August 1990, was with the Boston Symphony at Tanglewood.

Perhaps the most enduring aspect of Koussevitsky's musical legacy is the Tanglewood Music Center and the Tanglewood Concerts. Nestled in the Bershire Mountains near the New York/Massachusettes state lines, the Tanglewood estate has become the summer home of the Boston Symphony Orchestra. Initiated in 1936, the first concerts were presented in a tent and proved to be extraordinarily successful as more than 15,000 people attended. It was in the same year that, Mary Aspinwall Tappan a wealthy New England resident and arts lover donated her family's summer estate, Tangelewood, to the Boston Symphony where the orchestra has presented its summer concerts ever since (with the exception of the World War II years of 1942-1945.) In 1938 a large, 5,000 seat, open-air music hall (the Koussevitsky Shed) was constructed thereby giving the Boston Symphony a permanent facility to present its summer concert season.

In 1940 Koussevitzky established a summer music training program at Tanglewood for aspiring young classical musicians. The Tanglewood Music Center has attracted talented musicians from throughout the world who would train and attend Master Classes with members of the Boston Symphony and visiting guest artists. Great artists, including legendary American musicians Aaron Copland and Leonard Bernstein, trained there and returned to teach other gifted students.

In 1922, Koussevitzky commissioned what has come to be known as one of the greatest and most popular examples of orchestration in the repertoire, Maurice Ravel's transcription of Modest Mussorgsky's 1874 suite for piano, Pictures at an Exhibition. It was premiered by the Boston Symphony in 1923, and quickly became the most famous and celebrated orchestration of the work that had ever been made. Conductor Arturo Toscanini, who apparently had no great fondness for nineteenth century Russian music, considered the Mussorgsky-Ravel version of Pictures the greatest example of orchestration that had yet been produced, and performed and recorded the work for RCA Victor in 1953. Koussevitzky held the rights to this version for many years, but after his death, practically every celebrated conductor in existence recorded it, and new recordings of this orchestration of Pictures are constantly appearing.

Koussevitzky was a great champion of modern music, commissioning a number of works from prominent composers. For Boston Symphony Orchestra's 50th anniversary he commissioned Ravel's piano concerto, Gershwin's 2nd Rhapsody, Prokofiev's 4th Symphony (which was later revised by the composer), Hindemith's Concert Music for Strings and Brass, and Igor Stravinsky's Symphony of Psalms, as well as works by Roussel and Hanson.[4] In 1942 he founded the Koussevitzky Foundation to commission and perform new works—among the results were Benjamin Britten's opera Peter Grimes, Béla Bartók's Concerto for Orchestra, Aaron Copland's Symphony No. 3, and Olivier Messiaen's Turangalîla-Symphonie. Among Koussevitzky's recording premieres was that of Sibelius's Seventh Symphony.

As a conductor he elevated the Boston Symphony Orchestra to the status of a world-class symphonic ensemble and with the founding of the Tanglewood Music Institute he provided a unique and important educational experience that would contribute greatly to the development of young musicians throughout the world. The Tanglewood Institute Orchestra, comprised of student instrumentalists at the Institute, present weekly concerts during the summer season, thus providing them the opportunity to learn the orchestral repertory of the symphonic canon.

Another significant aspect of his musical legacy was commissioning, promotion and performing of new music. He commissioned many important composers to write music for the Boston Symphony. These commissions included works by such luminaries as Igor Stravinsky, Maurice Ravel, Paul Hindemith, Olivier Messiaen and Bela Bartok.

Koussevitsky recorded with the Boston Symphony exclusively for RCA Victor. The magnificent "Red Seal" recordings, made in Boston's Symphony Hall, had exceptional sound because of the hall's acoustics and Victor's care in microphone placement. An early session was devoted to the world premiere recording of Ravel's Bolero.

According to Music & Arts Programs of America, some of the Boston Symphony's recordings with Koussevitsky were issued on the RCA Camden label in the 1950s as the "Centennial Symphony Orchestra." One of the albums featured Prokofiev's Peter and the Wolf; while the orchestra was listed as the "Centennial Symphony Orchestra" and the conductor was not identified, the actual narrator, actor Richard Hale, was correctly identified. Camden often reissued historic recordings from the RCA Victor catalog with fictitious orchestral names to avoid competing with newer recordings by the same orchestra on the regular RCA label.